The title of this article is ambiguous. Further meanings are listed under Kipfenberg (disambiguation) .
Template: Infobox municipality in Germany / maintenance / market

Kipfenberg is a market in the Upper Bavarian district of Eichstätt .

Kipfenberg and its surroundings are part of the Altmühlalb natural area . The geographical center of Bavaria is about 500 m east of Kipfenberg ⊙ . 2000 years ago the Roman Limes border wall , now a World Heritage Site , ran through the town center. 48.946607 11.404567 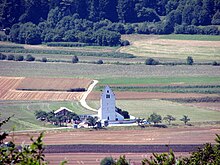 Church in Böhming on the foundations of the Roman numerus fort

A stool grave from 1800 to 1200 BC was found in the area of ​​the village. Found. The Roman Limes border wall crossed the Altmühltal there. In the district Böhming a roman 232/33 by was Alemanni destroyed and in 1898 discovered and excavated Numerus .

A Germanic Gauburg was founded on the plateau of the Michelsberg around 330. ( Burgstall Michaelsberg ) Later, the Michaelskirche , which today only exists in the foundations, stood there. A hermitage was built on it in 1756 , which, meanwhile orphaned, was demolished in 1819.

The individual grave of an approximately 30-year-old leader of the Friedenhain-Prestovice group (presumed baiovarii ) with Germanic and Roman grave goods, the so-called warrior grave of Kemathen, which was discovered in 1990 during road construction work in the municipality of Kemathen , dates from around 420 .

At the former Kipfenberg train station, a row grave field with more than 104 burials from the 4th to 7th centuries was excavated from 1901.

Between 1183 and 1188 a church was consecrated in Böhming by Eichstätt Bishop Otto (today's church in Böhming is a new building from the middle of the 15th century); 1186 confirmed Pope Urban III. the possession of the Eichstätter cathedral chapter in "Bemingen". Around 1198 appeared in documents of local nobility from "Pemmingen".

Kipfenberg was first mentioned in a document in 1266; a local nobleman named Rudegus de Kipphenberg acted as a witness on a court case. The castle and the place were sold to the Hochstift Eichstätt in 1301 . In 1352 Kipfenberg became a market; at the same time the place, previously a branch of Gelbelsee , became an independent parish. In the middle of the 15th century, the parish church was still today's St. George's chapel; the cemetery, which was abandoned in 1859, was moved there from Försterstrasse in 1616 and thus in front of the town's walls. A school in Kipfenberg is documented for the first time in 1541, which the local pastor Leonhard Kraus operated as a Latin school. From 1500 Kipfenberg was part of the Franconian Empire . In 1627 the current parish church, built in the second half of the 15th century, was consecrated again after three years of renovation. From 1632 to 1634 the plague raged in the place, which the Swedes devastated in 1634 .

From 1803 to 1805 Kipfenberg belonged to the newly formed principality of Salzburg-Tuscany as a result of the secularization . After its abolition, the place fell to the Kingdom of Bavaria in 1806 . In 1808 the Kipfenberg district court became the Altmühlkreis , and in 1827 it became the Regenkreis . Kipfenberg had been in Middle Franconia since 1837 . In 1869 a hospital was built (today a specialist neurological clinic). In 1898 the Eichstätt – Kinding local railway was opened to traffic as a narrow-gauge railway; later switched to standard gauge. It was abandoned in the 1970s.

With the district reform , the large community of Kipfenberg came together with the newly formed district of Eichstätt on July 1, 1972 to form the administrative district of Upper Bavaria .

The Kipfenberg municipal council has 20 members. The local elections on March 15, 2020 had the following result: 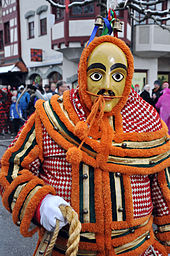 One of the oldest customs in the Kipfenberg Carnival is the Fasenickl with its impressive costumes. The Fasenickl is one of the most dazzling Carnival figures in the German-speaking area thanks to its extremely elaborate costumes and distinctive custom rituals. The Kipfenberg market has the oldest historical sources on this carnival tradition and has always been the center of its dissemination. The widely audible click of a short- handled whip , the babbling behind a wooden mask with a disguised voice, countless bells on the costume and the mysterious excitement "Gösucht" when distributing pretzels and sweets to the children form the acoustic backdrop of an original setting of characteristic rituals with a unique selling point. Confirmed findings allow the custom to be traced back to the Baroque period. With the Carnival Museum Fasenickl, which is housed in the completely renovated gatekeeper house, the oldest structure of which comes from the Middle Ages, the cultural association Die Fasenickl has succeeded in creating a museum gem. The cultural association Die Fasenickl e. V. has set itself the task of preserving the historical garments that still exist and making them accessible to the public, and on the other hand to present the custom of running around the Fasenickl outside of the carnival period.

The nickname of the Kipfenbergers is "Goaßhenker". There are several stories about the Kipfenberg goat. One of them, according to Anton Hotter, 1875: The Kipfenbergers did not come to the curtain wall because there was long peace. There was now grass growing and it was thought best to have it grazed by a goat. It was decided to pull the goat onto the wall. A rope, which was fastened at the top, was put around the animal's neck and pulled up. The goat was hanged with it and stuck its tongue out of its mouth. She can already taste the grass, called some. For the 750th anniversary of the Kipfenberg market in 2016, the theater performance Die Goaßhenker penned by Florian Schmidt took place on the market square . It spanned a broad arc far into the medieval history of the market town. In an impressive setting, the medieval Kipfenberg awoke anew and thrilled the audience with great pictures, fantastic dialogues and impressive fencing scenes.

The Easter fountain , which is set up every year on Palm Sunday in the market square, is worth seeing. The Limesfest, Kipfenberg's historical festival, is held every year around August 15th (Assumption of Mary). At the beginning of September the "Altmühltaler Lammabtrieb" takes place in the Böhming district.

Kipfenberg is on the disused Eichstätt – Beilngries railway line . The district of Irlahüll is crossed by the Irlahüllunnel of the high-speed line Nuremberg – Ingolstadt – Munich , the fifth longest railway tunnel in operation in Germany. The next train station is in Kinding .

The following long-distance cycle routes run through the municipality :

The German Limes Road also runs through the town.

Municipalities in the district of Eichstätt