Bad Hönningen is a town and spa in the Neuwied district in Rhineland-Palatinate , on the right bank of the Middle Rhine . It is the administrative seat of the association of the same name , to which it also belongs. According to state planning, Bad Hönningen is designated as a basic center.

The bathing and wine resort is located on the right bank of the Rhine between Koblenz in the south and Bonn in the north in the Rhine-Westerwald Nature Park . The district town of Neuwied is approx. 10 kilometers southeast of Bad Hönningen. The promenade along the Rhine is 1.5 kilometers long, the city forest offers 60 kilometers of hiking trails. The Hönninger Schlossberg is nine hectares of the largest contiguous vineyard in the Middle Rhine.

Relics from Roman and Franconian times were found in the construction of buildings in the 19th and 20th centuries . Today's city of Bad Hönningen was north, in the immediate vicinity of the Limes . Based on the finds from Roman times, it can be assumed that people settled here around 1,800 years ago. 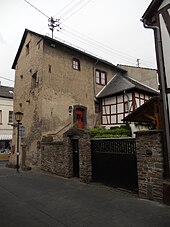 The high house. Rear with extension

In a deed of donation from Emperor Heinrich II. And his wife Kunigunde to the Bamberg Cathedral Chapter , Hönningen was first mentioned in 1019 as the property "Hohingen im Ingerisgowe" ( Engersgau ). Until the beginning of the 15th century, this property was “St. Georgenhof ", called" sand (Sankt) Jürgenhoff "according to other sources. This courtyard stood at the point where the “ High House ” was later built. In 1422 (according to other sources 1424) the Bamberg cathedral chapter sold this property to Archbishop Otto von Trier for 1,500 guilders. The widow Gerbrich, a sister of Count Otto von Hammerstein , gave the Archbishop Poppo of Trier a second estate at “Hoinga” in 1041 . He gave it to the then newly founded St. Simeonsstift in Trier .

The place name goes back to the Old High German personal name Hoho with -ing suffix and means 'settlement of Hoho'.

In 1204 the "Parish Hönningen" was first mentioned, which was a joint foundation of the Bamberg monastery and the Trier Simeonsstift . Before that, in 1135, there had been disputes between Bamberg and Trier about the distribution of the tithe . Pope Hadrian IV confirmed in 1155 the tithe to "Hoinga" to the Simeon pen. The parish of Hönningen extended on the Rhine from the brook in Ariendorf in the north to the former course of the Limes on the border to Rheinbrohl . On the first heights of the Westerwald , the Reidenbruch farm belonged to the parish and the Girgenrath farm beyond the watershed to the Wied . With the exception of a minor correction of the boundary in the 20th century, the parish corresponds to today's urban area of ​​Bad Hönningen.

The Trier Elector and Archbishop Raban von Helmstatt had the "High House" built around 1438. At that time, Hönningen belonged to the Arenfels rule. During the Thirty Years War , Hönningen burned down to twelve houses in 1632. In 1670 the Arenfels fiefdom was transferred to the von der Leyen house with all its property and rights .

In 1209 the Mönchshof, which still partially exists today, was built.

Today's Arenfels Castle goes back to the castle built by Gerlach von Isenburg in 1258 and 1259 (west wing and keep) . In 1848, Imperial Count Ludolf Friedrich von Westerholt acquired Arenfels Castle. He had it rebuilt in a neo-Gothic style by the Cologne cathedral builder Ernst Friedrich Zwirner .

Development into a spa and bathing town

In 1894 the first carbonic acid spring was drilled. More sources followed, and in 1895 the first bathhouse was built. In 1950 the municipality received the title "Bad" from the state government of Rhineland-Palatinate. On July 12, 1969 Bad Hönningen received city rights.

The Artus Mineralbrunnen GmbH was a company that was founded from the 1896/97 business Hubertus bubble and Arienheller carbonic acid plant was built. The springs were drilled in 1894 by the Breisig citizen Peter Lang. The Hubertus spring has a depth of 294, the Arienheller spring a depth of 380 meters.

In the early 1970s, the company also took over the well in Bornheim-Roisdorf . Mineral water is said to have been promoted there since Roman times . Artus has been in bankruptcy proceedings since 2002 . The company closed on May 31, 2008.

The development of the population of Bad Hönningen, the values ​​from 1871 to 1987 are based on censuses:

The city ​​council in Bad Hönningen consists of 22 council members, who were elected in a personalized proportional representation in the local elections on May 26, 2019 , and the honorary city ​​mayor as chairman.

Guido Job has been city mayor since 1997, the last time he was confirmed in office in May 2014. On May 26, 2019, Ulrich Elberskirch (independent) was elected as his successor with 52.06%. However, he resigned in the summer of 2020 for health reasons, so that the office will be held provisionally by the 1st alderman Diana Göttes until the new election.

The town twinning between Bad Hönningen and Saint-Pierre-lès-Nemours in France was established in 1980.

In terms of sport, Bad Hönningen is known nationwide mainly for the handball club HSG Römerwall , whose 1st senior team won the West German championship in 2001 and thus broke through to the professional field.

High water markings along the Rhine

Tourism is a key economic factor in the region . Despite structural changes in the classic bathing system in the 1990s, combined with less approved spa therapy measures and declining visitor numbers until 2005, health tourism is becoming increasingly important again due to demographic change .

The German Limes Road begins in Bad Hönningen and ends after 700 kilometers in Regensburg on the Danube. The Rheinische Sagenweg , which begins in Düsseldorf and ends in Mainz , also leads through Bad Hönningen .

Bad Hönningen station on the Cologne - Koblenz railway line on the right bank of the Rhine is served every half hour, both the RE 8 (Koblenz - Neuwied - Bonn-Beuel - Köln Messe / Deutz - Köln Hbf - Mönchengladbach) and the RB 27 (Koblenz - Neuwied) - Bonn Beuel - Cologne / Bonn Airport - Cologne Exhibition Center / Deutz - Cologne Hbf) stop in Bad Hönningen. The RB 27 connects the city directly to Cologne / Bonn Airport every hour . Since Bad Hönningen is located in the Neuwied district, the tariff of the Verkehrsverbund Rhein-Mosel (VRM) applies , the tariff of the Verkehrsverbund Rhein-Sieg (VRS) applies as a transitional tariff , provided the start / destination station is in the VRS area.

As the state government confirmed in February 202, a she-wolf with five young animals was recorded by a wildlife camera at the end of August 2019. This is the first confirmed wolf offspring in Rhineland-Palatinate after Germany's re-colonization with wolves.