The lake in Willscheider Berg was originally a basalt quarry

Vettelschoss is a municipality in the Neuwied district in Rhineland-Palatinate . It belongs to the Verbandsgemeinde Linz am Rhein , which has its administrative headquarters in the city of Linz am Rhein .

Vettelschoss is at an altitude of about 300  m above sea level. NHN , 7 km northeast of the city of Linz am Rhein and 9 km southeast of the city of Bad Honnef and extends on the edge of the Asbach plateau in the western foothills of the Westerwald . The Willscheider Berg rises to the west ( 360  m above sea level ) with its basalt lake. The municipality of Vettelschoss encompasses an area sloping from west to east and is between 190 and 365  m above sea level. NHN . The highest point is reached on the Rheinwesterwälder volcanic ridge above Kalenborn , the lowest in the valley of the Seelbach near Oberelsaff . 25 km of hiking trails run within the wooded and strongly reliefed landscape of the municipality, which is located in the Rhine-Westerwald nature park . You can reach the Rheinsteig via two hiking trails marked with a yellow symbol in the direction of Rheinbreitbach and in the direction of Erpel .

The districts of Kalenborn , Kau , Willscheid and Oberwillscheid as well as the residential areas Klaushof, Seiferhof and Willscheiderberg belong to Vettelschoss . In addition, a southeastern part of Kretzhaus (city of Linz am Rhein) belongs to Vettelschoss as part of the municipality. Furthermore, in the vicinity of the Seelbach, in the Oberelsaff district belonging to Neustadt (Wied) , there are two more houses and a chapel, which also belong to the Vettelschoss municipality as part of Oberelsaff .

In the west, the municipal boundary runs largely on Landesstrasse 254. The Erpeler Bach and Hallerbach brooks in the north of Vettelschoss and the Seelbach in the south are largely natural borders . In 1974 and 1993, respectively, there were area corrections, which led to a part of the Reifstein corridor (near the forester's house of the same name) that was formerly part of the local community Erpel and is now part of Vettelschoss.

In the south, the municipality of Sankt Katharinen borders on Vettelschoss with its districts Notscheid and Homscheid. In the west, the local community shares the border with the city of Linz am Rhein, on whose boundary the Kretzhaus, which is adjacent to the Vettelschoss district of Kalenborn, is located. Other neighboring communities are Erpel in the north-west, Windhagen in the north and east and Neustadt (Wied) in the south-east, although there is only a very short border to the latter.

Grave finds in the Walhelde corridor between Vettelschoss and Oberelsaff prove that the Vettelschoss municipality was already settled before Christianity. In the 1930s the Rhenish Provincial Administration in Bonn investigated ring walls on the Hummelsberg and Asberg mountains, which are located near the town . They are attributable to the Hunsrück-Eifel culture and were established in the period from 600 to 400 BC. Were erected. The ramparts were destroyed by the basalt mining.

The place name probably comes from the late early Middle Ages . The last syllable in the 9th century was probably Sciotz , 960 Scoz , which in Old High German denotes the gable end of a building, actually a protection-giving lead. Vettel is related to the Gothic fatha , Middle High German vade or fade for fence or partition. According to this, Vettelschoss could mean something like "enclosure that lies on the protected side of the Willscheider mountain". According to another interpretation of the name, Vettel is derived from the Old High German personal name Wetilo , which is synonymous with bailiwick or pawn contract. The parish registers of Neustadt an der Wied also contain the spellings Feddelschoss, Fettelschoss and Vetelschoss for Vettelschoss.

The field names Beielsberg and Beielswiese even Bilsberg , Bilswiese , Bilstein meadow written, could be on Bilstein Cunegonde point. Their daughter Hedwig von Gudensberg bequeathed her Rhenish possessions to her husband Ludwig around 1100 , including those that later belonged to the Vettelschoss in Altenwied . The mentioned field names could therefore indicate a settlement around 1100.

The first documentary mention of the place comes from a will from May 25, 1344, in which a Cristina de Vertilschos (= Christine von Vettelschoss ) - an inclusive in Dattenberg - bequeathed her possessions to various people and monasteries.

Other documents in which people from Vettelschoss are named come from the years 1418, 1434 and 1540.

Diesel locomotive from 1940 for transporting basalt from Willscheider Berg 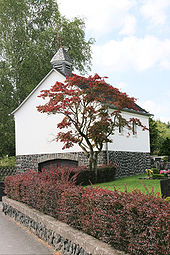 The rule of Kurköln ended in 1803 after more than 500 years with the Reichsdeputationshauptschluss . The Electorate of Cologne area in this region was initially the Wied-Runkel assigned and came in 1806 due to the Act of Confederation, the Duchy of Nassau . Lohrscheid II was then subordinate to the administration of the Nassau office of Altenwied . After the treaties concluded at the Congress of Vienna , the area was ceded to the Kingdom of Prussia in 1815 .

Basalt mining and processing used to be important in economic terms . 1921 sold Vettelschoß the land in the district Kalenborn for the construction of basalt work to melt basalt-Aktien-Gesellschaft (today Kalenborn Kalprotect ) in Linz am Rhein. With this money, the community was able to finance the connection to the electricity grid in 1922 and 1923 .

On 7 November 1970, the local community as part of Rhineland-Palatinate was administrative and territorial reform of the dissolved association of municipalities (up to October 1, 1968 Office ) Neustadt (Wied) assigned to the municipality of Linz am Rhein.

The development of the population of Vettelschoss, the values ​​from 1871 to 1987 are based on censuses:

The municipal council consists of 20 elected council members, who were elected in a personalized proportional representation in the local elections on May 26, 2019 , and the local mayor .

The honorary local mayor is Heinrich Freidel (CDU), he was directly elected in the 2014 local elections with 67.5 percent of the vote and replaced Falk Schneider in this office. In the direct election on May 26, 2019, he was confirmed in his office for another five years with a share of the vote of 55.01%.

The Vettelschoss coat of arms has been in official use since 1983. The flame sword stands for the Archangel Michael , the horseshoe symbolizes the earlier importance of agriculture for the place and the basalt columns symbolize mining and the successor industry.

Blue lake
The Blue Lake was created from one of the three basalt quarries in the local area. Basalt was mined here until around 1940, today it is a popular travel destination as a natural lake with a campsite and a restaurant.
Willscheider Berg
To the west of the center of Vettelschoss, the Willscheider Berg rises to a height of 360  m above sea level today . NHN , originally 370 m. Basalt was mined here until 1974. The area around the Willscheider Berg has been designated as a biotope complex and, since 1999, as a compensatory or compensation area for an industrial area that has developed in the south.
Willscheider mountain lake
After its closure, the basalt quarry created a lake that is about 50 m below today's plateau. The lake is inaccessible due to the almost vertically sloping rock walls and is therefore a retreat and development area for the flora and fauna.
Viewpoint "Wäller Blick"
On the spoil dump of the former Willscheider Berg quarry and the current biotope complex, the Vettelschosser Heinzelmännchen created a lookout point that is well worth seeing. Here you can look across the district of Vettelschoss in good weather to the high Westerwald - hence the name: Wäller Blick. The lookout point can be reached barrier-free via forest paths. There are plenty of free parking spaces at the nearby Willscheider Berg clubhouse. Well usable as a starting point for long hikes. There is a lot to discover around the Willscheider Berg. Here u. a. Relaxation and relaxation benches were built for those seeking relaxation.
Landmark from 1680
In the district of Kalenborn there is a boundary stone from 1680, which marked the border between the offices and parishes of Linz, Neustadt and Erpel. Today the city of Linz on the Rhine and the local communities of Vettelschoss and Erpel meet here.
Bernardus Chapel
The Bernardus Chapel from 1683 is probably on the site of an older chapel, as a chapel for the place was mentioned in a document from 1570. It is the only half-timbered chapel within the Linz am Rhein community and the only cultural monument of the Vettelschoss community:
Anthony's Chapel
The Antoniuskapelle is located above the town of Oberelsaff, which belongs to Neustadt (Wied), in the municipality of Vettelschoss. The interior contains a neo-Gothic altar that comes from the Anna monastery in Remagen.
Schmitzhof
The oldest surviving half-timbered house in Vettelschoss was built around 1640 and was owned by the St. Katharinen monastery until 1803 . It takes its name from the previous owners. The community bought the house and has been using it as a village museum since 2010. In order to make the museum more attractive, a wine bar was opened in the building (unfortunately closed as of 05/2020). In addition, a small and fine Christmas market has been taking place in and around the aahle Schmitzhoff on the 1st Sunday in Advent for several years.

Impression from the Vettelschosser Christmas market at the village museum

Kalenborn Kalprotect , which was founded in 1921 to manufacture cast basalt and is now one of the world's leading manufacturers in the field of universal wear protection, is based in the district of Kalenborn .

The Willscheider Berg industrial park is a location of the shoe manufacturer Birkenstock . The company relocated its headquarters from Bad Honnef to Vettelschoss in 1998, after opening a newly built distribution warehouse here in 1997. At the beginning of 2014, the administration was moved from Vettelschoß to Neustadt (Wied) , while Vettelschoss continues to serve as the company's logistics center.

The fire station in Vettelschoss

To the west of the community runs the federal highway 42 , which leads from Koblenz to Bonn . The next motorway junctions are Bad Honnef / Linz on the Rhine and Neustadt / Wied on the federal motorway 3 .

In 1912, the Linz (Rhine) –Flammersfeld railway was opened and had two stations in the municipality ( Kalenborn and Vettelschoss ). Today only the section between Linz and Kalenborn, where tourist traffic takes place, still exists.