Asbach is a municipality in the Neuwied district in Rhineland-Palatinate . It is the administrative seat of the Association of Asbach , to which it also belongs.

Asbach is located in the Niederwesterwald between the Rhine-Westerwald and Bergisches Land nature parks . The community borders the district of Altenkirchen (Westerwald) and the North Rhine-Westphalian Rhein-Sieg district .

The annual precipitation is 952 mm. The rainfall is high. They are in the upper quarter of the values ​​recorded in Germany. Lower values ​​are registered at 82% of the measuring stations of the German Weather Service . The driest month is February, with the most rainfall in July. In July there is 1.6 times more rainfall than in February. The rainfall is distributed fairly evenly over the year. Lower seasonal fluctuations are recorded at 27% of the measuring stations.

The place Asbach was created during the time of the Franconian conquest between 600 and 900. This is indicated by the place name, which is still dialect today “Asbich”, and the so-called “Frankenwall”. The place name, old spelling “Aspach”, is not derived from a watercourse, but describes a settlement area that arose from the beginning in the form of a small hamlet and not from a homestead .

Asbach was first mentioned in a document after 1180. In the Miracle Book of Siegburg and in a deed of gift from Archbishop Philipp von Heinsberg of Cologne . In 1183 Philip gave the "Rottzehnt zu Elsaff in the parish of Asbach" to the St. Pantaleon Abbey in Cologne . The Rott tenth was raised on newly cleared areas.

In the 16th century, Asbach became the seat of the district court of the Altenwied office.

After the Thirty Years' War , the Cologne Elector Maximilian Heinrich von Bayern had an inventory of the villages and farms in the Altenwied office carried out in 1660 . The following were listed for the parish of Asbach:

In Kirchdorf Asbach themselves were "sambt the Withumbshof five Höf sambt gardens".

In Löhe there were four courtyards and the courtyard in the Tunken. In Limpach ( Limbach ) and Oberlimpach there were seven farms together. In Wester there was only the archdiocese court. In Crumbach ( Krumbach ) there was only one farm. Two yards were counted on the moat ; three in Dittscheidt , in Hausen ( Hussen ) and zur Heyden ( Zurheiden ), four in Parscheidt and eight in Sessenhausen .

In addition to the castle and the monastery, there were three courtyards and a destroyed mill. Ehrenstein was an independent parish.

In 1803 the part of the Electorate of Cologne on the right bank of the Rhine was dissolved. In the Reichsdeputationshauptschluss of February 25, 1803, according to Article 21, Prince Karl Ludwig Friedrich Alexander zu Wied-Runkel was charged with the loss of the Grafschaft Kriechingen u as a result of the French Revolutionary Wars . A. the former Electoral Cologne Office Altenwied was awarded. In connection with the Rhine Confederation formed in 1806 on the initiative of Napoleon I , the Wied-Runkelschen, as well as the Wied-Neuwiedischen, areas came to the Duchy of Nassau . The now Nassau office of Altenwied and thus the parish of Asbach belonged to the newly established administrative district Ehrenbreitstein .

Due to the resolutions at the Congress of Vienna in 1815, substantial parts of the Rhineland fell to the Kingdom of Prussia . At the same time, Prussia received the northern Nassau region from the Duchy of Nassau in exchange for other areas, which included the Altenwied office and the Asbach parish. Asbach became part of the Prussian province of the Grand Duchy of Lower Rhine and in 1822 of the Rhine province . In 1816 Prussia rearranged the administrative structures for the state administration. The provinces were divided into administrative districts and counties , these in turn in the mayor's offices , each of which was assigned a number of municipalities. The parish village of Asbach became the administrative seat of the mayor's office of the same name , to which from 1823 the honnships and later the communities of Elsaff , Griesenbach , Krautscheid , Limbach , Rederscheid , Schöneberg and Windhagen belonged. The place and the mayor Asbach were the district Neuwied in Koblenz assigned. Because the old offices of Altenwied and Neuerburg belonged to Prince zu Wied-Runkel in 1803, this area and thus Asbach as well, together with the actual Wiedi areas, were subordinated to the princely-wied government in terms of municipal administration. The simultaneous Prussian administration was limited to sovereignty, military and tax matters. Only after Hermann Fürst zu Wied ceded his rights to the Prussian King in 1848, the Prussian administration was also responsible for communal matters.

Today's local community Asbach was formed on March 16, 1974 from the previously independent communities Asbach (1,106 inhabitants), Limbach (1,105 E.), Schöneberg (1,662 E.) and part of Elsaff (1,022 E.). As early as November 7, 1970, the two hamlets Dasbach and Heckenhahn from the municipality of Rott in the district of Altenkirchen were incorporated into the municipality of Schöneberg .

The municipal council in Asbach consists of 22 council members, who were elected in a personalized proportional representation in the local elections on May 26, 2019 , and the honorary local mayor as chairman.

Municipality or local mayor since 1946:

In the direct election on May 26, 2019, Franz-Peter Dahl was confirmed in his office for another five years with a share of the vote of 86.40%.

In 1237 a church was mentioned for the first time on the site of today's Catholic parish church of St. Laurentius. In the 19th century, the Romanesque church had to give way to a new building because of the increase in the number of believers and because it was dilapidated. In 1866 the old church was demolished except for the tower and a neo-Gothic , three-aisled church building was erected according to plans by the Cologne architect Vincenz Statz , which was consecrated in 1871. Four windows with figurative representations were made by the Cologne-Lindenthal glass painting company Schneider and Schmolz . The building only lasted until March 1945 - it was largely destroyed by bombs and shell fire; only the Romanesque tower remained. With great effort, the church was rebuilt and consecrated in 1951.

The Romanesque baptismal font is worth seeing, as is the tower from the beginning of the 13th century, which has the shape of a chalice and is richly decorated. On the first floor of the tower there is a chapel with a groin vault originally from the construction period, which was reconstructed after the collapse in 1972. In the chapel you can see a Pietà from around the 16th century . In the gallery there is a two-manual organ with pedal and 33 stops, which was built in 1991 by organ builder G. Christian Lobback . 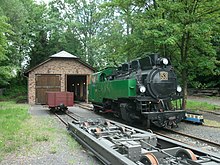 The only museum in Asbach is the railway museum on the Bröltalbahn . It was opened in 2000 and exhibits various vehicles (including locomotive 53), exhibits and documents about the Bröltalbahn / Rhein-Sieg-Eisenbahn (RSE) in the former locomotive shed . The community has meanwhile acquired the engine shed and housed their building yard here. While looking for a further use for the locomotive shed, she met Wolfgang Clössner († 2015), who was looking for a suitable storage space for his RSE steam locomotive 53.

With the help of the voluntary association members and the building yard of the community, an approx. 100 meter long piece of track including a level crossing was rebuilt on the former Asbach train station for maneuvering and presenting the vehicles, which was extended in 2012. In the meantime, the reception building has also been acquired and renovated by the community. The museum's various exhibitions are housed on the lower floor, while the upper floor is used as a private apartment.

The museum opens on the 2nd Saturday of the month and admission is free.

It is divided into the following sports: volleyball, soccer, badminton and popular sports.

There are several small shops in Asbach. However, the main business center is in the industrial park. In this industrial area there are several discounters and the “Vorteil-Center” is an independent shopping center that does not belong to any of the large retail chains . It also includes a hardware store, an electronics store, a perfumery, a fitness studio, an ice and events hall, a kart track and a cinema with 5 halls.

Station of Bröltal train on a postcard from 1901

The federal highway 8 runs north of the municipality and leads from Limburg an der Lahn to Siegburg . The next motorway junction is Bad Honnef / Linz on federal motorway 3 .

With the extension of the Bröltalbahn (narrow-gauge railway) Hennef - Buchholz to Asbach on August 15, 1892, Asbach received a station, which was equipped with a locomotive shed, reception building and goods shed as the end of the line. However, when passenger traffic shifted to the road in the 1950s, passenger traffic from Hennef to Asbach was also discontinued on August 1, 1956, freight traffic followed on December 1, 1956, followed by the closure of the route. After the railway ceased operations, the locomotive shed was initially used by the RSE as a regular bus depot, and the station has now been used as a private apartment, but is now owned by the municipality and is being renovated. Since the cessation of passenger traffic, only different bus routes and a. to Bad Honnef and Eitorf , at the Asbach market square there is a small bus station. In Unkel , Bad Honnef and Eitorf are now the nearest railway stations from where connections to Cologne , Koblenz (from Unkel or Bad Honnef) and victories made (from Eitorf). The locomotive shed and the station area have been used as a railway museum since 2000 (see museums).

The “Kamillus Clinic” is located in the village, a special clinic for multiple sclerosis patients with beds in the neurological area, a modern sleep laboratory and an internal department. The hospital is run by the Catholic women's order "Daughters of St. Camillus".