Großmaischeid (dialect: Grußmäschd , Mäschd or Maischeid ) is a medium-sized local community in the Neuwied district in northern Rhineland-Palatinate . With around 2,500 inhabitants, it is the largest local community in the Dierdorf Association . It is located near the Rhine-Westerwald nature park and has a direct connection to the A 3 between the Cologne and Frankfurt metropolitan areas . 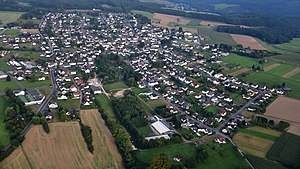 Großmaischeid is located in the Westerwald in northern Rhineland-Palatinate in the Neuwied district , near the Neuwied middle center and the Koblenz upper center . Großmaischeid has a favorable economic location between the metropolitan areas of Cologne and Frankfurt am Main and, as a neighboring town to Kleinmaischeid, also has an attractive tourist location, as Kleinmaischeid was once the center of the 25 member states of Europe. Seen locally, Großmaischeid is located southwest of the city of Dierdorf in the Rhine-Westerwald Nature Park , on an area sloping from east to west to the valley of the Ommelsbach . The districts Großmaischeid and Kausen as well as the residential areas Ommelsbachermühle and the hunting lodge Sayneck belong to the local community Großmaischeid .

Großmaischeid was first settled in the Middle Bronze Age (1550–1200 BC). This is confirmed by discovered during the construction of the highway (1937-1939) tumuli between greed Hofen and Großmaischeid. In the year 80 AD the Romans built the Limes border wall , which ran about 6 km southwest of Großmaischeid. Today's district Großmaischeid was forested before the settlement. It was a natural landscape that was probably cleared between 850 and 1300 AD.

The first documentary mention as Metscheid took place on January 20, 1148 through a confirmation document from the Laach Abbey (today Maria Laach Abbey ) from Pope Eugene III. In this letter to the Laacher abbot Gilbert († 1152) the Pope mentioned the Salic tithe (decimae salicae) at Maischeid , which was attributed to a gift from Rembold von Isenburg (1092–1121) . This donation obviously served to equip the Laach monastery, which was founded in 1093.

The development of the population of Großmaischeid; the values ​​from 1871 to 1987 are based on censuses:

The municipal council in Großmaischeid consists of 16 council members, who were elected in the local elections on May 26, 2019 , and the honorary local mayor as chairman.

Distribution of seats in the elected municipal council:

Guido Kern (SPD) became the mayor of Großmaischeid on August 14, 2019. In the direct election on May 26, 2019, he was elected for five years with a share of 70.55% of the vote. His predecessor Uwe Engel (SPD) did not run again after ten years in office.

As part of the territorial reform in Rhineland-Palatinate, which took effect on March 17, 1974, the previously independent municipality of Kausen was incorporated into the local municipality of Großmaischeid.

In Großmaischeid there is a marching band that started in 2015 with the “2. Mäschder Summer Carnival ”, celebrated its 65th anniversary.

Großmaischeid has had an artificial turf pitch since August 2012 (previously hard pitch ). There are also several riding stables, a riding arena, a dog park, a tennis court, a gym, an ADTV dance school, a large barbecue hut and several playgrounds.

The favorable location of Großmaischeid near the Oberzentrum Koblenz and the Mittelzentrum Neuwied , as well as between the metropolitan areas Cologne / Düsseldorf and Frankfurt and the favorable transport connections through the A3 with its own junction (AS Dierdorf ) favor the economic development of the local community. The plastics processing and metal processing industry, shading construction and tourism developed particularly strongly .

There are secondary schools in the neighboring town of Dierdorf (“ Martin-Butzer-Gymnasium ” and “Nelson-Mandela- Realschule plus ” (both voluntary all-day schools )).