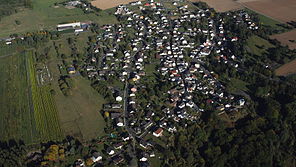 Bruchhausen is a municipality in the Neuwied district in Rhineland-Palatinate . The municipality belongs to the Verbandsgemeinde Unkel , which has its administrative seat in the city ​​of Unkel .

The village is situated on a spacious terrace, a loess Riedel plate ( "Bruchhausener Lössplatte"), on the edge of the Rhine-Westerwald above the Rhine Valley with a view of the Hocheifel and the Seven Mountains . At the southwest end of this plateau, 1.5 km away, is the village of Orsberg, which belongs to the local community of Erpel . From Bruchhausen down to Unkel, the valley of the Hähnerbach , which rises in the district , overcomes a height difference of more than 120 m. The residential area Haus Sankt Marienberg belongs to Bruchhausen .

Based on finds (pointed stone ax , hand ax , lance tip) in the vicinity of the place it can be assumed that settlement dates back to the Neolithic Age . Finds from the 7th century suggest that permanent settlements existed in the local area as early as the Merovingian period . The name “Bruchhausen” is probably derived from the word Broich (swampy place).

Bruchhausen was founded around 900 AD, when the first inhabitants settled on the heights of the Rhine near the swampy source of the Hähnerbach. The first documentary mention for the year 1024 is documented in the documents of the parish archives. In 1995 the official "1000 year celebration" was celebrated in Bruchhausen.

In the 12th century, after the death of the childless Count Adolf von Saffenberg, the Archbishop of Cologne, Friedrich I , gave the inherited rights to Erpel to the cathedral chapter of Cologne. Bruchhausen was already part of the Erpel parish at that time . Erpel received special rights, the "High and Free Glory". For Bruchhausen a so-called sublordship arose. Thus Bruchhausen belonged secularly to the Erpel High Court , ecclesiastically to the Erpel parish . Bruchhausen's ecclesiastical ties to Erpel led to tensions and pastoral rights (including benefices ) were restricted. In 1619 there was a dispute between the secular Erpeler mayor Johann Theuren and the clerical pastor of Erpel Gottfried Egidi. The dispute was only resolved in 1652 and the parish of Bruchhausen was granted partial independence.

In 1821 the pastor of Bruchhausen, Albert Raab, was informed of the final separation from the Erpel mother church by the church authorities on the basis of his petition submitted in 1819, which was initially reprimanded and unpardonized .

The fate of Anna Katharina Spee is still connected to the votive picture of the Sorrowful Mother Mary in the parish and pilgrimage church of St. Johann Baptist in Bruchhausen. It was donated in 1636 by the children of Anna Katharina Spee after she was burned as the witch queen of Bruchhausen . The oil painting still hangs there today. The writing in the black wooden frame indicates the names of the donors who kneel in the picture - relatively small - in front of Maria: Johann Jakob Spee and Agnes Spee with their husband Andreas Bachem.

In 1675 Margaretha Spee (died 1676), who lived in Bruchhausen after her time in the monastery, had problems with the payment for the masses of her mother, who had been executed 44 years earlier. The sale of a yard in the castle resulted in a financial settlement between Margaretha Spee and the parish church in Bruchhausen. The foundation, established in 1675, guarantees the financing of a mass for Anna Katharina and her family every Saturday until today.

In a description of the mine in Siepen (former name for St. Marienberg ) in Bruchhausen from 1789, the Bonn geologist Carl Wilhelm Nose (1753–1835) writes that "the ancients still extracted the ores using the technique of setting fire". Since black powder was invented around 1300 , it can be assumed that ores were mined here in civil engineering as early as the late Middle Ages .

A miner Christoff Frantz reported in 1668 about the " mine in Siepen " and describes a " brisk mining activity at the beginning of the 17th century with excellent water art ". Mining came to a standstill as a result of the Thirty Years War . In his report, Frantz recommended that the mine be put back into operation and drained into the Breitbachtal through an 800 meter long tunnel. In 1694, bridge master Anton Clouth received mining rights to all mines in the Rheinbreitbach district from Cologne Elector Joseph Clemens . The mine in Siepen in Bruchhausen belonged to the Rheinbreitbacher district. Around 1700 Clouth expanded the mine in the neighboring Rheinbreitbach and Bruchhausen. By 1715 a 654 meter long tunnel was driven and an air shaft was built .

The mine has been called St. Maria or St. Marienberg since 1724 . During these years the owners changed several times. A flourishing business is reported for 1731, 150 miners were employed in 1751, the workforce rose to 250 men. Due to various circumstances, the production fell sharply in the following years and came to a standstill in 1790. The business was resumed after a renewed change of ownership in 1797, from 1800 to 1815 3,709 quintals of cooked copper were obtained. 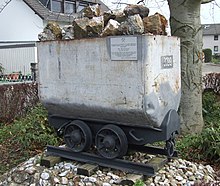 Early 19th century, new shafts were up to 80 meters depth drilled . Due to falling copper prices, civil engineering was stopped in 1826 and the mine was completely abandoned in 1830. After another change of ownership and new ideas , a new period began for St. Marienberg in 1841 , and steam power was now also used. The lignite required to fire the steam engine came from a pit in the neighboring Orsberg, now a district of Erpel . Now they penetrated to a depth of 195 meters, the ore production was 20,036 quintals in 1854 and 12,704 quintals in the following year. After that, the mine became uneconomical due to low ore deposits and operations were finally closed on May 4, 1874.

A mine cart ( Hunt ) from this time is set up in Marienbergstrasse.

In an overview map of the Bonn Higher Mining Office from 1912, 38 different mine fields are shown in the vicinity of Rheinbreitbach and Bruchhausen . In addition to the St. Marienberg mine described here, the St. Josephsberg mine in Rheinbreitbach and the Phinchen and Clemenslust mines east of Bruchhausen in the Kasbach valley were the most important.

Bruchhausen belonged as part of the parish and the rule of Erpel to the Cologne cathedral chapter since 1493 at the latest . With the 1801 peace treaty of Lunéville and the result of the Reichsdeputationshauptschluss , Bruchhausen was assigned to the Principality of Nassau-Usingen (from 1806 Duchy of Nassau ). Then it was part of the Nassau Office of Linz .

After the treaties concluded at the Congress of Vienna , Bruchhausen came to the Kingdom of Prussia in 1815 , which introduced new administrative structures in the Rhineland in 1816. Bruchhausen has belonged since then as a municipality to the mayor's office Unkel (renamed in 1927 to "Amt Unkel") in the district of Linz , after its dissolution in 1822 to the district of Neuwied. In 1885 the community of Bruchhausen included the Grube Sankt Marienberg residential area with seven residents in two houses. Since the dissolution of the Unkel office on October 1, 1968, Bruchhausen has been part of the Unkel community as a local community.

Development of the population (December 31):

The local council in Bruchhausen consists of 12 council members, who were elected in the local elections on May 26, 2019 in a personalized proportional representation, and the honorary local mayor as chairman.

Markus Fischer (CDU) became local mayor of Bruchhausen in July 2004. In the direct election on May 26, 2019, he was confirmed in office for a further five years with a share of 78.45% of the votes.

In the adjacent Erpeler Wald there is the Laurentius hut and the wayside shrine, the Eye of God (in the Rheinbreitbach area). There is also a war cemetery in the vicinity, but already in the municipality of Unkel .

The place is on the road 252 between Unkel and Neustadt (Wied) and is connected to the federal road 42 via this. The next motorway junction is Bad Honnef / Linz am Rhein on the federal motorway 3 .

The nearest train station is in Unkel on the right-hand Rhine route .