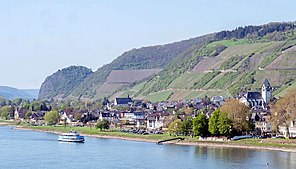 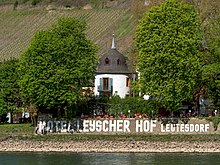 Leutesdorf is a municipality in the Neuwied district in Rhineland-Palatinate . It belongs to the Bad Hönningen community .

Leutesdorf is located immediately northwest of the Neuwied Basin on the right bank of the Middle Rhine opposite the city of Andernach on the slopes of the Rhenish Slate Mountains . The village extends over a section that is no more than 500 m wide and tapers to the south together with the Rhine Valley. The municipality belongs to the Rhine-Westerwald nature park . The west in the Rhine Valley is naturally included in the Andernacher Pforte and the entire north in the Rhein-Wied-ridge . There it reaches 373  m above sea level. NHN near the northern limit its highest point. Leutesdorf includes the residential areas Haus Haselberg, Hubertusburg, Jakobshof, Johannesburg Abbey, Marienburg and Windhausen. The Marienburg and the Johannesburg Monastery are within the town.

Parts of the place are regularly flooded during high water. The Unterdorf is particularly badly affected. At times the water is then on the first floor of the houses directly on the Rhine. Leutesdorf is the oldest and largest wine village on the lower Middle Rhine . Wine was already being grown here on the slopes of the Rhine in the 6th century . Leutesdorf is also known for its blackberry wine .

The place name changed over the centuries from "Liuduuinesthorp" and "Liudwinesthorp" (people's friend village) in 868 via "Ludesdorp" (1333) to "Leudesdorf" (1665). The place has been called Leutesdorf since the end of the 19th century. The population is predominantly Catholic (1993: 80%).

The development of the population of Leutesdorf, the values ​​from 1871 to 1987 are based on censuses:

The municipal council in Leutesdorf consists of 16 council members who were elected in a personalized proportional representation in the local elections on May 26, 2019 , and the honorary local mayor as chairman.

Heinz-Willi Heisterkamp (SPD) became the local mayor of Leutesdorf on August 19, 2019. In the direct election on May 26, 2019, he was elected for five years with 55.57% of the vote. Heinz-Willi Heisterkamp's predecessor was Volker Berg (CDU), who had not run again after ten years in office.

Under the name Weinkul-Tour , a 3.2 km long hiking trail with 33 themed panels on the subject of wine was set up in Leutesdorf in 2003, which emerged from a wine trail from 1989. 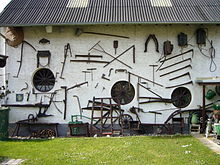 Since May 15, 2011, a small village museum has been located in a former distillery near the Rhine that has been converted into a community center. It offers a good insight into the history of viticulture and shows many tools and documents from bygone times as well as insights into the work of the 14 neighborhoods that still exist today.

There are 14 neighborhoods in Leutesdorf, as can be found in many places on the Middle Rhine. The origins go back to the Middle Ages. Named neighborhoods are known from their neighborhood books from the period after the Thirty Years' War . In Leutesdorf these books are mostly more recent, but there are previous books noted that have been burned or become unusable. The neighborhoods were named after streets, churches, holy houses or, more recently, after districts. Births, deaths, disasters or other incidents in the village are recorded in the books.

The tasks of the neighborhoods are laid down in the statutes. In the past, this included helping with disasters, births, deaths, washing the dead, making the death shirt, and providing pallbearers. Some neighborhoods also had their own dress code.

The board of directors of a neighborhood is the "bailiff", assisted by assessors, secretaries and treasurers. 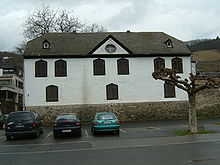 Fronhof on the banks of the Rhine

The oldest cloister courtyard is the Fronhof , the origins of which can be traced back to the 9th century. 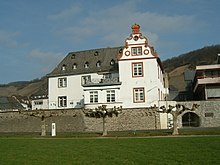 The Leutesdorfer Zoll is first mentioned on January 24, 1309. Emperor Heinrich VII left the Leutesdorf customs to the Aachen moneylender Bartholomäus to settle his debts. In April 1309 he bought it back. After Heinrich's death in 1313, it was agreed that the Archbishop of Cologne would have to pay 200 pounds Turonese royal groschen a year as compensation for the damage he caused to the Leutesdorf customs.

From then on there are no more historical entries about the Leutesdorfer Zoll for 300 years. In 1616 a new customs office was set up in Hammerstein, but it was moved to Leutesdorf because of the Thirty Years' War. For the first time in 1638 Leutesdorf customs officers appear again in baptismal registers. At the end of 1688, customs were no longer manned. In 1690 the elector had the customs building repaired, as evidenced by several invoices.

The four stately houses that adjoin the customs gate to the north prove that the customs officers must have been very wealthy. They bear the numbers 1687, 1770 and 1780 in wall anchors. The customs officers, Besehers and successors built them on their own account and they passed on to their successors when they died. In 1805 the Leutesdorfer Customs was abolished.

Today, after an extensive renovation, the customs gate is inhabited. During the renovation work, a cast-iron stove plate with the coat of arms of Elector Johann Hugo von Orsbeck was found in the cellar . On the south side are high water marks from different centuries. Next to the keystone is a small statue of the village saint, Saint Lawrence. 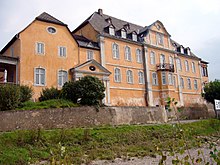 The entire front of the Rhine is one of the sights of Leutesdorf. If you come from the south through August-Bungert-Allee, which is lined with old plane trees, you will pass the Bungert-Haus, which is decorated with Ionic style elements. Right next to it is the Johannesburg. It is the mother house of the order of the St. John sisters of Maria Königin . Adjacent is the Hotel Leyscher Hof with its beautiful Rhine terrace. If you continue through the customs gate from 1638, you come to Rheinstraße, where old half-timbered houses and former monastery courtyards are located. The Rhine front is known from the TV series MS Franziska .

The pilgrimage church of the Holy Cross at the end of the village in the direction of Hammerstein with the replica of the Holy Sepulcher and the attached Mount of Olives chapel with the grave of Johannes Haw is also worth seeing. 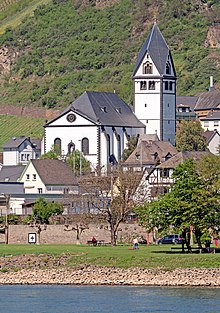 The origins of the Catholic parish church St. Laurentius, located in the center of the village, go back to a Romanesque church, the tower is still from this time. Today's church was built around 1730 mainly by the Trier court architect Paul Kurz . The Stumm organ from 1735 is remarkable. Next to the church is the cemetery.

There are still several holy houses and crosses in the village , such as the infirmary cross on the Rhine or the high cross at the end of the village at the foot of the vineyards and the Lingässer cross in Bungert-Allee. Small reliefs are embedded in the wall of various houses, which were the stops on the “ Sieben Kniefall Weg ”.

Murder Cross at the Olterbach 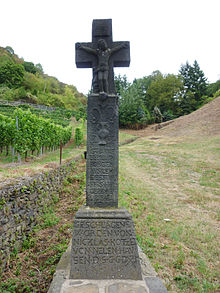 Mohr's murder cross on the Olterbach

In 1715, Daniel Mohr from Leutesdorf had a stone cross erected in memory of his wife Gertrud, who was murdered there, on the Olterbach, not far from the Hammerstein boundary. The cross is directly on the right edge of the B 42 in the direction of Hammerstein. It is described in the literature under Mohrsche's Murder Cross . On the base it bears the inscription:

SHF = his housewife or his house 'wife, DSGG = God's grace to the soul.

The Rheinsteig , the Limeswanderweg and the Rhein-Radweg run through the Leutesdorf district . Above the vineyards lies the Langenbergskopf nature reserve, which has been designated since 1935, with rare Mediterranean plants. From there you get to the "Edmundshütte", which is open on Sundays and public holidays in summer. Even further above are orchards with an apple educational trail. There is also a blackberry plantation at the top, which is part of the “Blackberry Inn”. Here you can enjoy everything that can be made from blackberries: from waffles with hot blackberries to blackberry wine and liqueur. The view over the entire Neuwied basin is something special.

At the annual wine festival and the people Winzerzug village has not only become a center of attraction for wine lovers, filling the narrow streets, taverns and the hype on the Rhine - Promenade three days with life. Some of the ostrich taverns are already open in the early summer months.

The winemakers have the largest share of the domestic economy. Leutesdorfer wine is known for its quality and is repeatedly awarded. A butcher's shop and a gas station are available for daily needs. There is a dental practice in the village. Several craft businesses and service providers, a campsite and a mechanical engineering company complete the offer. A modern youth hostel with 160 beds was built on the site next to the Zehnthof. The opening was in June 2015. 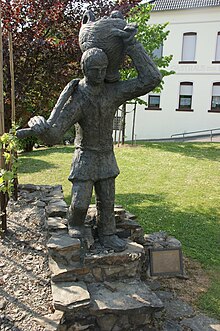 The 17 wineries located in Leutesdorf work on the three main locations of Rosenberg, Gartenlay and Forstberg. Around a million vines are planted there. The main variety of the excellent wines recommended by wine guides is Riesling . In addition, Kerner , Pinot Noir , Dornfelder , Müller-Thurgau , also called Rivaner , Pinot Gris , Blue Portuguese , Gewürztraminer and some Chardonnay are grown in high quality . In 1927 there were 75 individual vineyards in Leutesdorf on 130 hectares, with 1.3 million vines. In June 1944 and 1972, parts of the vineyards were devastated by violent storms and a landslide. This reached across the main road to the railroad tracks.

As part of the land consolidation in the 1970s, 2,378 individual plots were merged, new farm roads and 10.5 kilometers of new retaining walls were built. The vineyards are all steep slopes with a 30-70% gradient. The soil is a clay slate weathered soil, which towards the south has an increasing proportion of pumice. Because the cultivation areas face south to southwest, they receive a lot of sunlight, which of course affects the quality of the wines. The proximity of the Rhine also plays a major role because of the humidity it emits.

The Maria Laach monastery used to own several vineyards in Leutesdorf that were cultivated by Andernach winemakers. Today there is only one symbolic vineyard with one vine. A continuous family ownership up to 1640 can be proven for individual wineries.

In the 19th century, mining was also carried out in Leutesdorf. The Leutesdorf slate mine stretched in the Bachmühltal on the northern edge of the town . It reached from Fahr (Neuwied) to Leutesdorf and inland to Altwied . There slate was mined for house roofs. A copper vein was also found in a tunnel in the Bachmühltal, known as the Leo mine field , but there is no evidence that it was actually mined. Above the Leutesdorf church, copper ore was mined in the opencast mine. In 1857, the Lena mine near Leutesdorf is mentioned in a newspaper , where small amounts of brown iron stone were extracted.

At the southern end of the village there was a quarry since 1530, in which slate was extracted. This quarry, which was operated until 1886, was probably built by the Andernach patrician Ludwig Hillesheim. He transported the slate to Andernach by ship.

Leutesdorf has a Deutsche Bahn stop and three stops on the Koblenz – Neuwied – Linz bus line. The busy federal road 42 and the railway line on the right bank of the Rhine , which is mainly used by freight and local trains, run through the entire town . Leutesdorf suffers from a high level of noise pollution due to the meeting of railways, road traffic and shipping as the main traffic arteries in a very confined space.

Until 1985 there was a ferry connection with a passenger and car ferry between Leutesdorf and Andernach. The first ferry right was transferred to the Leutesdorf ferryman Mattheiß Nalbach on May 5, 1682. A yaw ferry drove from 1865 to 1915, then a motor ferry until 1985. The ferry connection was reactivated with the opening of the adventure center to the Geysir in Andernach in May 2009 as a passenger ferry, the regular ship from the visitor center to the Geysir on the Namedyer Werth serves as the ferry . The ferry does not run daily from Andernach to Leutesdorf.