Holy grave in Görlitz , completed in 1504

As Holy grave ( Latin Sepulcrum Domini , grave of the Lord ' ) are cenotaphs of Jesus Christ referred.

In art history, the term Holy Sepulcher is used to refer to both structural imitations of the rotunda in the center of the Church of the Holy Sepulcher in Jerusalem , as well as architecturally reduced facilities with figurative scenes. Often they are memorials or votive monuments of returning pilgrims to Jerusalem and / or contain relics brought with them from that city. Both the architectural type and the figurative structures are often related to the graves of donors. The term Holy Grave or sepulcrum Domini is also used for temporary grave structures as part of the Easter liturgy.

The Holy Sepulcher buildings can (meanwhile) be completely image-free ( Holy Sepulcher in Görlitz ), follow the model very closely or only in individual motifs (rotunda, dimensions, number of pillars), set free-standing in the churchyard ( Michaelskirche in Fulda ) or be set in a church building ( Mauritius rotunda in Constance ). The reduced systems, often in the form of wall niches inside the church, usually contain life-size groups of figures. Such ensembles were included in liturgical Easter plays in the Middle Ages . The body of Christ is sometimes removable or easy to cover as a flat relief. In the context of the Easter liturgy, the burial with the body of Christ could first be visualized, then later (with the body removed or covered) the resurrection with the empty grave. The popularity of these performances and presentations in the 14th and 15th centuries is due to the increase in the Eucharistic cult in the heyday of mysticism . The figurative representations often show that a lockable recess in the chest of the Christ body was used to store consecrated hosts . Similarly, sacrament houses , in which the Holy of Holies was “buried” on Maundy Thursday , were provided with depictions of Christ's tomb. In the Baroque era, the backdrop of the holy grave , a backdrop that encompasses the entire sanctuary , was also used.

Holy grave monuments often bring together all the figures of the biblical story from the burial to the visit of the three women at the empty grave after the resurrection ( Freiburg Minster ). Other representations are iconographically clearer:

The oldest picture pattern is the visitatio type , which depicts the encounter between women and angels at the empty Easter grave. This scene has been widespread since late antiquity and was symbolic of the Easter event until the high Middle Ages, before the risen Christ himself became the focus of the depiction. In addition to the women and the angel, the iconography of this scene usually also includes the sleeping guards at the grave. The more recent depiction type is the Depositio type , which depicts the entombment of Christ as the end of the Passion cycle and whose program of figures, in addition to the body of Christ, only includes the assistance figures of the entombment, but not angels or guards. The term Holy Sepulcher is only used for both when it comes to three-dimensional representations with a more or less architectural setting. 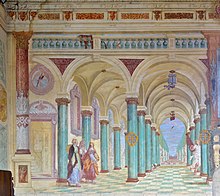 Fresco of the holy three women with an angel in the Holy Cross Church in Säben Abbey , South Tyrol

Holy grave in the Schloßbergmuseum Chemnitz

Holy tomb in the Cappella Rucellai, in San Pancrazio in Florence

Sculpture of the Entombment of Christ in the Maifeldmünster

Commons : Replicas of the Holy Sepulcher  - collection of images, videos and audio files