Neersen is a village on the Middle Lower Rhine and part of the town of Willich in the Viersen district in North Rhine-Westphalia .

Derivation of the name

Neersen is named after the river Niers , which at that time was of great importance for Neersen. Until it was artificially straightened in 1930, the Niers flowed directly past the site, fed a water mill and served as a water inlet to the moat. A letter from the Archbishop of Cologne, dated 16 December 1263, calls the steward of Neersen "Vait van der Nersin". Since family names were not yet common at that time, this is to be understood as the original name "Vogt von der Niers" or "von Neersen". On a Dutch map from 1617 the place is recorded as "Niersen". Neersen first referred to the castle there and the feudal territory administered from it . The civil settlement emerging in the vicinity of the castle was also known as “Nerstraeß” or “Neer-Straße”, that is, the street on the Niers. Probably after the feudal glory Neersen was dissolved in 1798, Neersen finally prevailed as a place name.

In 1250 was in in Latin the drafted Memorienbuch Benedictine - Abbey Gladbach a "Henricus de Nersa" called. It is the first ever mention of the place name. 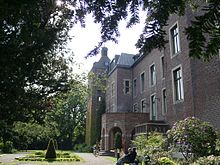 In 1263 Neersen was expressly mentioned for the first time as the seat of the Neersen bailiffs, at the latest in 1371 as the location of a moated castle on the Niers . The Niers formed the border between the Electorate of Cologne and the Duchy of Jülich . In addition to the castle, Neersen consisted of only a few houses and, together with the larger village of Anrath, formed the glory of Neersen. At that time, Neersen was part of the parish of Anrath.

Neersen, too, was not spared from the effects of the Thirty Years' War . In 1642 Neersen was occupied by the Catholic equestrian general Johann von Werth , who liberated the region from Protestant troops. Gerhard Vynhoven from Neersen may have played a not insignificant role, because as a Catholic priest he was military chaplain in von Werth's unit. A little later, in the years 1654 to 1660, built Vynhoven north of the village, the pilgrimage - Chapel Little Jerusalem . The barons of Virmond-Neersen had come to considerable wealth through active participation in the war on the Catholic side and generously supported Vynhoven. The Virmonds had the castle converted into a castle (1661–1669) and in 1652 they founded a church in Neersen, in which they settled a Minorite monastery in Neersen in 1658 . In addition to an important pastoral activity, the monks also developed a lively trade in cattle, wine and food. The first market in Neersen, the Halbfasten- or Schüppenmarkt, was held by the monastery.

In the French Revolution following coalition wars Neersen was occupied during the autumn campaign in October 1794 by French revolutionary troops. Like all the conquered territories on the left bank of the Rhine annexed by France , the place was incorporated into the Département de la Roer (Dt. Rur department) in 1798 and became French national territory through the Peace of Lunéville in February 1801.

On September 18, 1798, at the urging of the Guardian of the Minorite Monastery, Father Quirin Leopold Eggerath, the Neersen monastery church was separated from the Anrath parish and Neersen was raised to parish. Eggerath became the first pastor of the new parish. In doing so, he saved the monastery church from secularization by the French, during which the rest of the monastery was officially dissolved in 1802. At that time the new parish numbered 1,200 Catholics. Eggerath consecrated the church to Saint Napoleon in 1803 and surprisingly succeeded in avoiding the planned annulment of the young parish and even getting the buildings of the former monastery back.

In 1802, freedom of trade was also introduced under French law .

At the Congress of Vienna in 1815 Neersen was added to the Kingdom of Prussia .

By the beginning of the 19th century, some textile factories had settled in Neersen as part of industrialization . There the locally grown flax was woven into linen and velvet made from imported cotton . Particularly noteworthy is the "Rheinische Velvetfabrik", which was founded in Neersen in 1864 by the Krefeld factory owner Gustav Klemme and was a major employer until it went bankrupt in 1928.

In 1832 a new cemetery was laid out on Kirchhofstrasse.

In 1877, the Neersen railway station was put into operation south of the town, forming the junction between the Neuss – Viersen and Krefeld – Rheydt lines . Rail traffic there was gradually discontinued from 1968 to 1994.

The artificial straightening of the Niers took place in 1930. Since then it no longer flows directly past the castle, but is approx. 1 km from the castle.

In the time of National Socialism , enthusiasm for the Nazi ideology was taken to extremes. The Minoritenplatz was renamed “Adolf-Hitler-Platz” and, this was extra-mandatory, the Malteserstraße was renamed “Straße der SA”. The council members at that time called themselves in the council minutes only with pseudonyms, such as Efmann, Pemann etc.

In 1942 the small settlement Cloerbruchallee was transferred from the city of Mönchengladbach to the municipality of Neersen as part of a reallocation process .

On March 10, 1945 Neersen was occupied by the American 5th Panzer Division, which was coming through Viersen . Since the Wehrmacht had already left the place , there were no armed clashes.

In 1965 the first and only Protestant church was built in Neersen , which was named "Friedenskirche" in the mid-1980s.

After the entry into force of the “Law on the reorganization of the district of Kempen-Krefeld and the independent city of Viersen” on January 1, 1970, the community of Neersen was merged with the neighboring communities of Anrath, Schiefbahn and Willich to form the city ​​of Willich . The Castle Neersen serves as city hall of Willich since 1,971th In 2003 the town hall was expanded to include the newly built Technical Town Hall.

The fields have the following meanings:

The station Neersen was in the intersection area of the two railway lines Neuss-Viersen and Krefeld-Rheydt . However, it was not really in Neersen, but more than 500 m southeast in Mönchengladbach- Kloerbruch Am Nordkanal (street name) near the Niers. The Neersen motorway junction is located near the Neersen train station. 51.2369186 6.48020944

In addition to the two motorways, the two state roads L29 and L361 also cross in Neersen. Both are connected to the two federal motorways at the Neersen motorway junction.

Neersen is best known for the Neersen motorway junction of the same name southeast of the town, which connects the A 44 and A 52 federal motorways . Before finalizing the Dusseldorf airport bridge in June 2002 accumulated here the traffic, which is why Neersen nearly every morning in the regular traffic was mentioned.

Districts of the city of Willich