The title of this article is ambiguous. Further meanings are listed under Gallows (disambiguation) . 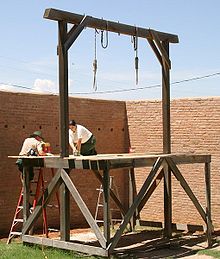 A gallows ( mhd. Gallows  = gallows, cross; ahd. Galgo  = pole, pole) is an execution instrument that consists of one or more posts and overlying crossbeams and serves as a frame for hanging a condemned man . Likewise, similar constructions that do not serve the act of killing are so designated. The Duden also defines a "gallows-like device on which something can be hung" as a gallows.

The term gallows refers to an instrument that has established itself in particular as a punishing device for killing. Because of similar shapes, other tools, such as the scoop at the draw or scoop well, also bear the name. In 1796, Adelung named devices for salt mining, wooden rests on letterpress presses , and mouthpieces on horse bridles as further examples .

The German dictionary of the Brothers Grimm sees the original use of the term gallows for 'branch' or 'tree', documented as an execution instrument, among other things in Low German of the 14th century, and concludes in comparison to the Roman sword punishment : “[...] then that appears to hang on green gallows than older, also milder punishment. one simply took a tree or branch as a gallows, as Tacitus already  reported. [...] So the galga may originally be a branch in general, to which afterwards only the name was left for this use, later transferred to the artificially produced gallows. "

The digital dictionary of the German language calls Galgen a “scaffolding consisting of a pole and crossbeam for the execution of the death sentence by hanging”, transferred to similar frames on which one can hang something, such as the draw well or the loom . The Common Germanic word was formed in Old High German in the 8th century from the Old Saxon galgo and goes back to ie with the related Armenian jatk 'twig', 'whip', 'stem' or Lithuanian žalgà 'rod', 'latte'. g̑halg (h) - '(flexible) branch', 'rod'. This points to the earlier type of execution, in which the condemned to death were tied to a bent tree and soared up. With the beginning of Christianization , the Old High German galgo and its equivalents in the Germanic languages ​​also stood for the cross of Christ , until borrowings from Latin ( crux = cross) prevailed. 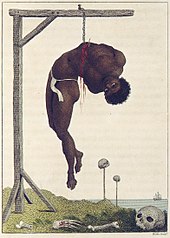 Sleepy gallows used to punish slaves . You can see the Г -shaped basic construction with a stabilizing bow .

In the penitentiary system, the device for execution by hanging (death by hanging ) is called the gallows .

The execution victim is put in a noose around the neck and then the ground is removed from under his feet so that his neck bears its entire weight. It dies as a result of the pressure exerted by the cord when the body falls. The victim's unconsciousness and death are caused by

The time of fainting and the onset of death depend on the knot used and the depth of the victim's fall.

Gallows were also used for excruciating torture methods : for example, hanging by means of hooks in a part of the body (see picture Gallows for punishing slaves ) or hanging by the feet.

Cage on the snap gallows

A special form was the snap, quick or rocking gallows, in which the cross beam was movably mounted like a rocker. Snap gallows were used to draw water from the bet , a drinking trough or a pond, as well as to sanction offenders or dishonest bakers. Depending on the severity of the offense, these were tied or dipped into the water several times in a cage with the help of the snap gantry, sometimes until they died.

The snap gallows was originally a penal instrument of lower jurisdiction . As a "quicker" it was used in the Middle Ages to punish blasphemy among other things . In the 16th and 17th centuries in particular, it was used by the military as a "quick gallows" to punish deserters . These were "quickly pulled up or flicked upwards by the hands tied backwards, and then quickly let down again in order to dislocate their arms".

Hang on the tree

Hanging is one of the oldest types of execution. In earlier times, the killing took place mostly on trees, often on oaks because of their stability . Corresponding executioner or court oaks or trees are still known in many areas .

Gallows in the real sense - wooden scaffolding erected for hanging with one ( sleepy ) or several posts (often three- sleeper ) as well as stone gallows towers - have been found in Central Europe since the reign of Charlemagne . Old field names such as " Galgenberg " or " Hochgericht " allow conclusions to be drawn about earlier locations of gallows, which were often placed on the border of the court. Also to deter any rabble on busy paths or streets. In this sense, those executed were often left hanging on the gallows long after death. Executions on the gallows have increasingly assumed the character of public spectacles since the Middle Ages , as they were usually performed in front of a large number of spectators. At that time, theft could already be punished with this type of execution.

Since the late 19th century, efforts in Great Britain to accelerate the onset of unconsciousness and death while hanging. Led to the "long case" (Engl .: long drop ) one: the condemned man was tied up and placed the noose around his neck on a trapdoor. If it was opened, the rope abruptly stopped the subsequent fall, which should lead to a fatal injury to the cervical spine (broken neck). The necessary height of fall was previously calculated depending on the weight of the victim. Executions are still carried out this way in some countries today, including some former British colonies . 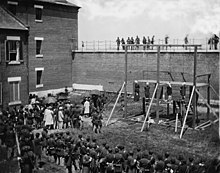 Execution of four conspirators in the Lincoln assassination on the gallows, 1865

The "long case" was also used in the USA . Since the beginning of the 20th century, however, alternative types of execution were increasingly used there (see gas chamber and electric chair ). Three convicted murderers have been hanged there since 1976, the year the death penalty was reinstated . In Great Britain , executions were carried out on the gallows until 1964, when the death penalty was suspended and later abolished there.

In the newly founded German Empire , hanging on the gallows was replaced in 1871 by beheading , which had been reserved for aristocratic delinquents since the Middle Ages. In the " Third Reich ", however, executions on the gallows were reintroduced as a further form of execution in 1933. As a result, numerous convicts were hanged from 1942 to 1945, including many resistance fighters against the Hitler dictatorship . However, no gallows with a trap door were used; the victims died from strangulation. The Plötzensee execution site was a notorious prison in which convicts also had to die on the gallows .

In the final phase of the Second World War there were numerous final phase crimes on the German side : court courts imposed draconian punishments, often including the death penalty , for offenses such as desertion or the destruction of military strength . This was often done by hanging; the executors often left the murdered hanging in public places and hung up signs with sentences like "I deserted". After the end of the Second World War , some war criminals from the Nazi era ended up on the gallows, including those convicted of the Nuremberg trials .

In Austria-Hungary death by hanging on was Würgegalgen ( strangulation ) regular of execution until the Republic of German Austria was in 1919 abolished the death penalty in due process. The Austrian gallows had a peculiarity: it needed three executioners to serve it. The delinquent was tied to the execution pole, the chief executioner put a cord around his neck and the two other executioners pulled the person to be executed down while the chief executioner pulled the cord taut. According to contemporary reports, no person sentenced to death suffered more than a minute. In the period after 1933 and when the Austrofascists came to power until the annexation to the German Reich in 1938, executions were again carried out on the gallows (see list ). After the Second World War, criminals under Austrian jurisdiction until 1950 (see Johann Trnka ) and war criminals under Allied jurisdiction until 1955 were hanged in this country .

Even today, death on the gallows is a widespread method of execution, especially in African and Asian countries (including Egypt , Iran , Iraq , Japan , Kuwait , Malaysia and Singapore ).

Closely associated with the gallows was in the Middle Ages the superstition under gallows and gallows trees were growing from urine and semen hanged the Alraunen in the form of hangman; from 16./17. In the 19th century there were also numerous legends and fables about mandrakes.

The Beerfelder Galgen in the Odenwald , which still exists today, is considered the best preserved in Germany. Another very well-preserved gallows can be seen on the former execution site of the Steinheim High Court ( Hanau-Steinheim ). The first recorded mention was in 1579 and the last known execution took place in the 18th century. In Burglengenfeld in the Upper Palatinate , the entire round stone structure of the gallows has been preserved. Only the (presumably) bricked-up stone pillars and connecting beams are missing. The gallows (Eilern) was in Westphalia.

In Austria there are still several, partly very well preserved, former gallows such as the gallows (Döllersheim) in Lower Austria. The one in Kirchberg am Walde can be considered the best preserved .

Known people who died on the gallows