At Green Week 1939: Heinrich Himmler , Richard Walther Darré and Helldorff on a tour. To the right of the French ambassador Robert Coulondre

Albert Speer (background in the middle of the suit) in the circle of the NSDAP Gauleitung in Berlin. Group portrait on the occasion of the renovation of the Berlin Gauhaus under his direction in 1932. In the foreground (from left to right) Hans Meinshausen , Karl Ernst , Wolf-Heinrich von Helldorff, Joseph Goebbels and Karl Hanke

Wolf-Heinrich Julius Otto Bernhard Fritz Hermann Ferdinand Graf von Helldorff , often erroneously Wolf Heinrich Graf von Helldorf , (born October 14, 1896 in Merseburg , † August 15, 1944 in Berlin-Plötzensee ), came from the Meissen nobility of Helldorff and was the son of Rittmeister Ferdinand von Helldorff (* 1869). From 1933 he was a member of the Reichstag for the NSDAP and police president of Potsdam and later of Berlin . He was a general of the police and achieved the rank of Obergruppenführer in the SA ; in the SS he received the same rank as honorary rank . From 1938 he made contact with resistance groups and was executed in 1944.

He came from the Meissnian noble family von Helldorff and was the son of Rittmeister Ferdinand von Helldorff (* 1869). After the outbreak of the First World War, Wolf-Heinrich served as a flag junior in the Thuringian Hussar Regiment No. 12 and was promoted to lieutenant in March 1915 . Later in the war he was promoted to Rittmeister and qualified as an interpreter officer. As such, he was present at the events surrounding the armistice in Compiègne and was also hired by Matthias Erzberger as a courier. After the end of the war he was a member of several Freikorps , including the Freikorps Roßbach . Because of his involvement in the so-called Kapp Putsch , he had to flee to Italy in 1920 , where he stayed for a few months.

In the summer of 1932 von Helldorf was able to win the later Reich Foreign Minister Joachim von Ribbentrop , according to his own statements, for National Socialism .

He had already joined the SA in 1931 and acted as SA leader in Berlin. Long before the transfer of power on September 12, 1931, he organized the first anti-Jewish riot in Berlin. In the subsequent criminal proceedings, Helldorff, who was defended by Roland Freisler , got away with a low sentence.

In 1933 he was entrusted with the SS leadership of Berlin-Brandenburg. In this role he allegedly issued the slogan that for every Nazi killed ten Marxists had to die. At the same time he was elected to the Reichstag in the 9th electoral term in 1933 . In March 1933 he was appointed police chief of Potsdam . Immediately after the second anti-Semitic Kurfürstendamm riot , Magnus von Levetzow had to resign as police chief in Berlin and was replaced by Helldorff in July 1935.

Helldorff had lost the manor he had inherited in 1931. His bankruptcy could not be explained solely by the fall in agricultural prices; rather, betting debts and a lavish lifestyle had contributed to it. It was rumored that Helldorff had got into debt with Erik Jan Hanussen , the well-known Jewish clairvoyant, and was dependent on him. Even as the chief of police, Helldorff made a name for himself through gambling debts, luxury purchases, unpaid bills and rent debts; there were even garnishments. On several occasions Helldorff received interest-free " loans " in considerable amounts for debt relief , which were paid to him from party coffers and which he did not have to repay.

Helldorff had distinguished himself early on in attacks against Jews . In March 1933, he led a group of SA men who stormed the Am Urban hospital and unauthorized deposition of the medical director Hermann Zondek and other Jewish and communist doctors. In his official capacity, Helldorff was "an avid advocate of tougher legal persecution measures" against Berlin Jews. Joseph Goebbels noted in his diary on July 2, 1938: “Helldorff wants to build a Jewish ghetto in Berlin. The rich Jews should pay for that themselves. That's right. I support him in this. ”In July 1938, Helldorff issued“ Guidelines for the Handling of Jewish Affairs ”, which contained 76 points of petty administrative harassment: summons mainly on the Sabbath, stricter and more frequent controls, administrative fees at the maximum rate. Goebbels wrote about it: “Helldorff presented me with a list of the measures taken against the Jews in Berlin. They are really rigorous and comprehensive now. In this way we will drive the Jews out of Berlin in the foreseeable future. ”From 1938 he extorted the so-called Helldorff donation from Berlin Jews who were willing to emigrate , before he had them handed over their previously confiscated passports.

This contrasts with the indulgent judgment of the writer and NSDAP member Hans-Otto Meissner that Helldorff “protected many Jews in a remarkable way and helped a number to emigrate.” Other contemporary witnesses also confirm that they had successfully intervened with Helldorff on behalf of Jewish friends. However, there are indications that Helldorff received money for it.

Contacts to the resistance

Helldorff had contacts with high officers of the Wehrmacht through his subordinate Fritz-Dietlof Graf von der Schulenburg , with whom he was friends . He was outraged by the intrigues in the Blomberg-Fritsch crisis and passed exonerating material to the Wehrmacht leadership that was withheld by the Gestapo . In view of the imminent danger of war, he made contact with Ludwig Beck and Erwin von Witzleben in 1938 . Helldorff later passed on secret reports from the security service to Hans von Dohnanyi , in which the mass shootings in Poland were depicted. He was also in touch with Friedrich Fromm and Friedrich Olbricht . He met several times with Claus Schenk Graf von Stauffenberg in 1944.

However, the conspirators overestimated the possibility of using the police apparatus through Helldorff or even being able to neutralize it. Helldorff's hesitant attitude towards the coup d'état can be interpreted as trying to protect himself on both sides. However, it remains to be seen whether his orders would have been followed at all. 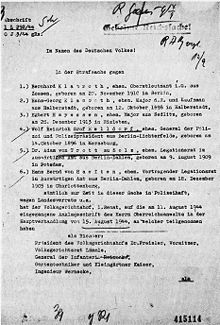 Because of his participation in the conspiracy of July 20, 1944 , Helldorff was sentenced to death by the People's Court under Roland Freisler . The reaction to Helldorff's "betrayal" was extremely violent. Goebbels repeatedly complained about the ingratitude of the traitor whom he promoted and to whom he had given an estate of 500 acres from a secret fund. Heinrich Himmler listed Helldorff as the first among the conspirators in his speech to the Gauleiters in 1944.

“Now, unfortunately, something very sad is coming. Unfortunately, there was an old party comrade, Count Helldorf. He's been through the whole betrayal for half a year to a year, he of all people. That is one of the most paradoxical things. He complained that the party had gotten so fatigued. But then he was immediately told by our officer who interrogated him [...]: Allow me, then you are the chief bonze. Ironically, Mr. Helldorf, [sic] the former Dr. Goebbels and I, I think, must have apologized twice, if not three times. [Throw in from Goebbels: With 80,000 marks, and he owns four apartments in bombed Berlin! ] "

Hitler also complained that he had paid the count four or five times, rarely less than 100,000 marks . Hitler hatefully ordered Helldorff to watch three executions and then be hanged in Plötzensee .

Helldorff was buried in the cemetery in Tangstedt (Stormarn district).

Konrad Heiden described Helldorff as "an adventurer and a soldier of the worst kind". André François-Poncet , then ambassador of France, called him a "sinister adventurer". Albert Speer felt "disgusted" by Helldorff's greed when he stocked up on luxury goods in Vienna in 1938. The name Helldorff is hardly mentioned in the literature on the German resistance. He was "a colorful and controversial figure" in resistance circles. Helldorff "is one of the most contradicting figures of the Third Reich " and does not seem sympathetic because of his frivolity, his extravagance, his anti-Semitic and corrupt attitude. On the other hand, according to Ted Harrison, he did not persist in “blind faith” and obedience, but felt repulsed by intrigue and mass murder and turned against a government that plunged the country into war and misfortune.