Golden party badge of the NSDAP

The golden party badge of the NSDAP belongs to the group of decorations of the NSDAP and was the third highest party award of the NSDAP during the time of National Socialism (after the " German Order of the NSDAP " and the " Blood Order ").

The badge is one of the anti-constitutional propaganda means in Germany . Its production and public carrying or distribution is prohibited according to § 86a StGB . 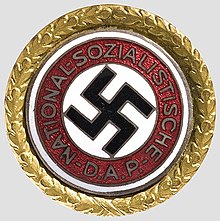 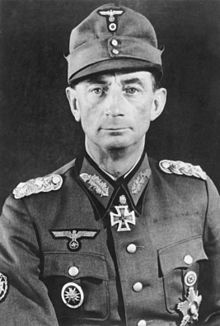 The Golden Party Badge, donated by Adolf Hitler on November 9, 1933, was awarded in both a large (30 mm) and a small version (24 mm) and consisted of the NSDAP party badge, around which a golden oak wreath was placed. The only difference between the two versions was that the “large version” had a larger golden oak wreath.

The "large version" was worn on all service uniforms of the NSDAP and its branches as well as on military uniforms or on civilians at public events on the "social suit". The “small version” was to be worn if the “large version” was felt to be unsuitable or it was not possible to use it.

There were two reasons for an award:

When it was given to people with a low party number (so-called " old fighters "), this was engraved on the back of the badge. If the wearer had received the golden party badge as an honor, "AH" for Adolf Hitler and the date of award were embedded on the back.

Variants of the NSDAP's golden party badge for foreigners were extremely rare .

Furthermore, Adolf Hitler had apparently planned to expand the golden party badge with a variant on a rune star and a second level as a "silver badge". Samples were designed, but these variants were not awarded.

The golden party badge is the medallion of the " Teutonic Order " created in 1942 , which was presumably awarded in different stages.

The central assignment of NSDAP membership numbers was the responsibility of the admission office on the basis of a Führer Ordinance of March 29, 1935. This was subordinate to the Reich Treasurer of the NSDAP.

Hitler's own party badge was custom made; "Number 1" is engraved on the back of the badge. Hitler gave his badge on April 27, 1945, three days before his suicide, to Magda Goebbels - the wife of Joseph Goebbels .

In 1996, the Russian secret service FSB announced that it was in possession of the golden Adolf Hitler party badge. When the badge was to be issued for the first time on the occasion of an exhibition on the 60th anniversary of the unconditional surrender on May 8, 1945, it was stolen on June 30, 2005 during a break-in.

The Golden Party Badge of the NSDAP is one of the National Socialist awards, the use of which is not permitted in Germany under the law on titles, medals and decorations of July 26, 1957.