The use of symbols of unconstitutional organizations is an offense under German criminal law , which is regulated in Section 86a of the Criminal Code (StGB). This state protection offense is an abstract endangering offense, that is, the offense is already fulfilled when the protected legal interest is endangered; a violation of the legal interest is not necessary. Protected legal interests here are the democratic rule of law and political peace. The aim is to prevent the impression that there is a development contrary to the rule of law , in which anti-constitutional efforts in the direction symbolized by the marks would be tolerated. The specific intention to support is not necessary.

Section 86, Paragraph 1, No. 1 of the Criminal Code names parties that have been banned by the Federal Constitutional Court and identifies their substitute organizations. This applies in particular to the symbols of the Socialist Reich Party , which, according to the judgment of the Federal Constitutional Court, saw itself as the successor organization to the NSDAP .

Special cases are the Freedom German Workers' Party , which was classified as an association in the prohibition process, and the KPD , whose ban was later relativized but not lifted. Hammer and sickle were seen as hallmarks of the KPD (West) . But today the hammer and sickle no longer have any symbolic meaning directed at the KPD (West). Its successor organization, the German Communist Party , continues to bear hammer and sickle in the party logo.

In Section 86 (1) No. 2 StGB, associations are named that are incontestably forbidden because they are directed against the constitutional order or against the idea of ​​international understanding. The same applies to their substitute organizations. The ban authority shall be governed by § 3 para. 2 VereinsG .

Examples of such associations are, above all, former right-wing extremist organizations or those that have continued to exist illegally, such as the German Alternative , the Nationalist Front , the Wehrsportgruppe Hoffmann , the National Socialist / National Activist Action Front , the National Collection , the Wiking Youth , the Blood-and-Honor -Division Germany and Combat 18 .

The § 86 1 no., Para. 4 of the Criminal Code aimed at the former Nazi organizations. In addition to symbols such as the swastika , slogans such as “ Alles für Deutschland ”, “ Heil Hitler ”, “ Sieg Heil ”, “ Meine Ehre ist Treue ” or “ Mit deutschem Gruß ” are among the marks that are covered by the penal code Songs like the Horst-Wessel-Lied or " Our flag flutters us ahead ".

On the other hand, the Reich War Flag (in a version before 1935, i.e. without a swastika) or the song of the Germans are not Nazi symbols .

Through the Crime Combat Act of 1994, the listed marks were equated with those that could be confused with them ( Section 86a, Paragraph 2, Sentence 2 of the Criminal Code). Neo-Nazis had increasingly attracted attention with slightly modified symbols such as mirror-inverted or inverted swastikas. According to established case law, “confusingly similar” means that a “not particularly knowledgeable and not exactly scrutinizing” observer recognizes the typical characteristics of an original symbol. It does not matter whether the symbol in question is known or unknown.

It is punishable to disseminate the mentioned marks as well as to use them in public or to use them in a meeting ( Section 86a (1) No. 1 StGB). Corresponding preparatory acts, namely the production, keeping in stock and importing and exporting for the purpose of dissemination or use in the manner mentioned are also punishable ( Section 86a (1) No. 2 StGB).

Excluded from this are acts of civic education, the defense against unconstitutional efforts, art or science, research or teaching, reporting on current events or history or similar purposes ( § 86a Paragraph 3 in conjunction with § 86 para. 3 StGB). 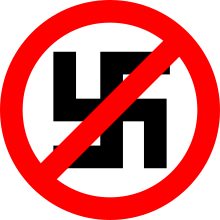 A crossed out swastika

Section 86 (3) of the Criminal Code, whichcriminalizesthe use of symbols used by unconstitutional organizations , does not prohibit any use that is used for civic education, the defense against unconstitutional endeavors, art, research or teaching.

To counter right-wing extremism, anti-fascist groups have designed symbols of rejection, including a crossed out or open swastika. In the opinion of several German public prosecutors ( OStA B. Häussler , Stuttgart ), however, such swastika representations were also affected by the prohibition laws.

The Mannheim District Court sentenced a student to do social hours in a non-profit organization and to pay a fine of 200 euros because he wore a badge with a crossed out swastika and it was not clear that the wearer was speaking against National Socialism. In the appeal proceedings, the student was acquitted.

The Tübingen district court sentenced a student to a fine of 50 euros in 2005 for wearing a badge with a crossed swastika crossed out. On 16 March 2006, the raised Landgericht Tübingen this judgment on: The carrier had clearly emerged as anti-fascists, the symbol leave even for tourists his opposition recognize Nazism and the carrier would otherwise by a mistake of law have been relieved because West German police and authorities § 86a StGB would have interpreted differently.

On September 29, 2006, the Stuttgart Regional Court sentenced a mail order company from Nix-Gut Records for shipping goods with swastikas crossed out or smashed by a fist, according to Section 86a, Paragraph 1, No. 1 and 2, Section 86 para. 1 no. 4 StGB to a fine of 3600 euros. It is unlawful to use prints on T-shirts, posters, trailers or the like that are obviously consciously against the symbolism displayed on them - regardless of the slogan under which they were written and advertised (such as “Get the Nazis out!”). Because § 86a StGB is undisputedly an abstract endangering fact. Therefore, its objective fulfillment is independent of the subjective political opinion of the user. In addition, the symbolism of the Nazi era should be completely banned from the public.

The ruling met with outrage among German criminal lawyers and politicians and was also debated in the Bundestag . The conscious stand against right-wing extremism should be promoted, not criminalized. In response to a parliamentary request, the Federal Ministry of Justice announced a change in the law if the Federal Court of Justice would confirm judgments against those wearing anti-Nazi symbols. As early as 1973, the BGH had declared the use of images that objectively not support National Socialism to be not punishable. The mail order company appealed against the judgment of the Court Stuttgart revision one before the Supreme Court where the case was heard on March 8, 2007 and the federal acquittal demanded. The BGH complied with this request on March 15, 2007 and overturned the judgment of the LG Stuttgart. A swastika depiction, "the content of which clearly and unambiguously expresses the opposition to the organization and the fight against its ideology, obviously does not run counter to the protective purpose of § 86a StGB and is therefore not covered by the provision of the provision." This means that In Germany the legal situation has been clarified and the wearing of anti-fascist symbols is permitted.

For example, at auctions of historical objects and writings with a picture, the swastika is often made unrecognizable beforehand by covering it over or by image processing. For example, on the back of an initial version (2005) of the DVD cover for the film “ Der Untergang ” and the first DVD, the swastika in the imperial eagle on the hat of the Hitler actor Bruno Ganz is painted over in black. In another version, the actor is shown smaller and the hat is partially darkened so that the symbol cannot be fully recognized; further covers manage without any representation. The film posters, still photos, foreign covers and the cover of the accompanying book have not been retouched. Historically researching authors did not display the character described on the cover to be on the safe side and named their book XX - Die SS-Rune , published in 2009, as a special character on typewriters .

The computer game Wolfenstein 3D , which fictitiously has the Nazi era as its central theme, was confiscated nationwide in 1994 because of its representation of unconstitutional marks and indexed by the Federal Testing Office for media harmful to minors because of its representation of violence . The following titles in the series appeared, in addition to international versions, also in special German-language versions in each case, in which any direct reference to the " Third Reich" presented there as an enemy was removed. In contrast to the Federal Republic of Germany, the international versions were also distributed regularly in Austria and Switzerland. The removal of unconstitutional marks within the meaning of Section 86a StGB was typically used in a large number of computer games in the industry; in Germany there was a de facto ban on such representations in computer games. On August 9, 2018, a change in the administrative practice of the age ratings of the entertainment software self-regulation (USK) was announced: Since then, computer games with unconstitutional labels can also be submitted for review and, if necessary, given an age rating. With Wolfenstein: Youngblood , among others, a game version with swastikas was published in Germany in 2019 after the USK committees had previously given an age rating, although the electronics retail chain Media-Saturn did not want to sell this version due to a "sensitive topic of the content " .