from Wikipedia, the free encyclopedia
This is the spotted version , flagged on August 2nd, 2020 . There is 1 pending change that has yet to be viewed.

USK logo
It has been used since the external presentation was revised in August 2010.

Historic USK logo that was used until August 2010

The entertainment software self-regulation ( USK ) is the responsible body in Germany for the age rating of video games and video game trailers . The USK markings can also be found on games in Switzerland or Austria, since only one version is often produced for German-speaking countries, but they are not valid in these countries.

Since May 31, 2008, the USK has been supported by the voluntary self-control entertainment software GmbH in Berlin . Elisabeth Secker is the managing director. The game - Association of the German Games Industry eV acts as a shareholder of the GmbH in accordance with the principle of semi-state self-regulation, the USK ensures the organization of the examinations, but the respective age decisions are made by experts appointed by the advisory board in cooperation with the permanent representative of the Supreme State Youth Authorities at the USK. Since it was founded in 1994, the USK has checked over 30,000 games for their suitability for children and young people. In 2012, a total of 2283 audits were carried out.

Meaning of the releases

The USK approvals were initially recommendations, but since the amendment to the Youth Protection Act (JuSchG) in 2003, age ratings have been mandatory and must be clearly identified both on the game's packaging and on the data carrier. The age levels are laid down in Section 14 (2) of the JuSchG. According to JuSchG, a game may only be made available to young people in public if it is approved and marked for the corresponding age group. This applies above all to the data carriers with games sold in retail outlets . The games may be openly displayed and offered for sale, provided that the age of the buyer is verified when a purchase is made.

A stricter regulation applies to games without youth approval (18): they are excluded from mail order and retail outside business premises (e.g. sales booth or kiosk ). The law defines the term mail order business as a business without personal contact, in which there is no guarantee that no mailing is made to children and young people (Section 1 (4) JuSchG). Mail order companies who carry out an age verification of their customers (e.g. using the Postident procedure) are therefore not covered by this regulation. Games that are not marked are generally treated like games that are not approved for young people (18) (Section 12 (3) JuSchG) and can be indexed by the Federal Testing Office for media harmful to young people . The electronics retailer in Germany almost only offers games marked by the USK, while video stores - especially those with 18 departments - can also buy and rent USK-unchecked and / or indexed games.

The USK approvals are:

Games for information, illustration or teaching purposes that are marked as information or teaching programs are completely excluded from the restrictions, provided that they “obviously do not impair the development of children and young people” (Section 14 (7) JuSchG). In case of doubt, the highest state authority decides and can revoke labels at its own discretion.

Exceptions are made for data carriers that are less than 2,000 mm² in size, such as Game Cards for Nintendo 3DS and Nintendo Switch . These are generally not labeled on the data carrier for releases without age restrictions and from six years of age, while for releases from twelve, sixteen and eighteen years of age, a small text such as "Free from 12 years" is printed instead of the formal USK symbol.

Game manufacturers can have their products rated by the USK for a fee. This procedure usually leads to one of the five markings according to JuSchG. According to JuSchG §14, Paragraph 3, the review committee, chaired by the permanent representative of the Supreme State Youth Authorities, also has the duty to refuse to be labeled, for example if it comes to the conclusion that the tested medium is seriously harmful to young people or fulfills a criminal offense ( e.g. glorification of violence ). In such cases, the game is often indexed by the Federal Testing Office for Media Harmful to Young People (BPjM). This applies above all to versions for the non-German, European market (so-called Euro versions ) that are imported into Germany by dealers and players. If, on the other hand, a game is marked by the USK, it can no longer be indexed since the amendment to the JuSchG 2003.

At the USK, the sifters play through the games individually with the help of solution aids and additional material provided by the submitter, and a presentation is created for the expert committee with a special focus on content relevant to the protection of minors. The classifiers are available to the experts for all open questions. Reviewers can also play individual game sections themselves on request in order to get a more detailed picture.

The representative of the Supreme State Youth Authorities (OLJB), who are in charge of youth protection, participates in the USK's advisory bodies and issues the age ratings on this basis. The reviewers are independent. For example, as a teacher , journalist , social scientist or youth officer, you have experience in youth work, are interested in the interactive medium and are not involved in the hardware or software industry.

Since August 2018, computer games can also be classified as USK if they contain unconstitutional symbols such as the swastika . The background to this is a changed legal opinion of the OLJB, which now assumes that the social adequacy clause set out in Section 86 (3) StGB applies not only to traditional media such as films, but also to computer games. The social adequacy clause enables unconstitutional symbols to be depicted, provided that they serve “civic education, the defense against unconstitutional endeavors, art or science, research or teaching, reporting on current events or history or similar purposes”. The educational game " Through the Darkest of Times ", in which the player had to organize a resistance group during the Nazi era, was the first game to benefit from this new legal conception .

According to the legal requirements, the USK only checked games that were presented on physical data carriers until 2016. If games are distributed online, for free or for a fee as a download, the provisions of the State Treaty on Youth Media Protection (JMStV) apply . For example, the free comic first-person shooter World of Padman had been distributed for several years without a USK rating until it was submitted for examination by third parties in December 2010 and was rated “12 years and older”. For distribution over the Internet and simultaneous sale as a data carrier ( e.g. Steam ), this results in various unanswered legal questions. USK is working towards expanding its competencies to all games regardless of the form of distribution, including browser games, for example . Since a reform of the JMStV in 2016, the labeling procedure according to the JuSchG can now be carried out for versions of films and games in telemedia, i.e. online offers, if these can be presented like carrier media (§ 12 sentence 2 JMStV).

As co-founder of the International Age Rating Coalition (IARC), the USK and other official institutions around the world also assign age ratings for online games and all other types of apps . The USK age ratings are displayed in the Google Play Store , Windows Store and Firefox Marketplace .

Criticism of the release system

Size comparison of the USK logo (left, 3.5 × 3.5 cm) and a PEGI logo on the same scale. The gray background shows the size of a Nintendo DS game box. 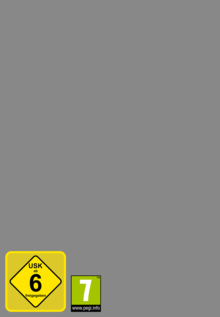 Another size comparison, with the logos of both organizations as shown on z. B. the packaging of a game for the Wii or Xbox 360 would be printed.

According to JuSchG , Section 14, Paragraph 3, the USK is obliged not to label media that are classified as "seriously harmful to young people" according to Section 15, Paragraph 2, No. 1–5 JuSchG. The USK has been criticized from various sides for keeping this obligation. Such unlabelled media can be indexed by the BPjM; media that are seriously harmful to minors must be treated as indexed works according to Section 15, Paragraph 2. Critics now state that these works could still be sold in Germany with the conditions described in §15, Paragraph 1, No. 1–7 (which some video stores also do), for example as gray imports. A purchase “across the border or on the Internet” is also conceivable.

On the other hand, players in particular criticize the fact that manufacturers in many cases use self-censorship to program a version of their product specifically for the German market in order to avoid being denied USK labeling and the subsequent indexing by the BPjM. The changes often include the removal of any representation of blood, the cutting of cutscenes, or even changing the background story (example: Soldier of Fortune II). It is felt to be absurd that products that are expressly aimed at an adult audience from the outset and only censored games receive the USK rating "No youth approval" are changed under the provisions of the protection of minors.

In the meantime, there are also cases in which manufacturers publish the games worldwide with less violence than originally planned, instead of adapting them for the German market. The removed violence can be submitted outside of Germany in the form of a (mostly free) DLC that is not available in Germany . The publisher can thus advertise the game in Germany as "uncensored".

Individual cases of self-censorship with regard to the PEGI classification are also known. The goal is a lower classification (instead of a release at all, as is the case with the USK nowadays).

Instead of changing games for the German market that the USK refuses to classify, some publishers choose not to publish them in Germany at all. A prominent example of this is Microsoft , which did not offer the title Gears of War in Germany. Microsoft stated that a censored version no longer met the expectations of players in Germany regarding the high level of the game. Compatibility via the game console's multiplayer online service is no longer guaranteed due to the necessary deep interventions.

In its position from February 2015, the Fachverband Medienhabigkeit eV points to the lack of “development-impairing binding criteria in the age approval of computer games for the prevention and prevention of media dependency” in the 15 different “aspects of effectiveness” that justify the key criteria of the USK. With a view to a possible potential for dependence on computer games, “high-frequency reward aspects in the sense of intermittent reinforcement, the duration and frequency of a game or social factors” remain outside the USK guiding criteria and cannot be taken into account in the assessment.

Other organizations of voluntary self-regulation, which, through the authorization of the highest state authorities in accordance with Section 14 (6) JuSchG, issue binding labels within the meaning of the Youth Protection Act, are the FSK for films and the ASK for slot machine games.

In most other European countries, games are marked with the non-binding recommendations of the PEGI . In the USA, the ESRB assesses the suitability of computer games for children and young people, in Japan the CERO .