The title of this article is ambiguous. Further meanings are listed under dispute (disambiguation) . 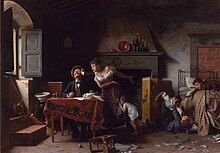 When the joy in the house dies ; Painting by Pietro Saltini

Dispute , even strife , dissension , discord , dissension , strife , stink , an open exchange is a disagreement between two or more actors , individuals , groups or parties ( Political parties , party in a dispute , war party ) that are not always obvious and does not necessarily always have to be hostile , but often (in contrast to the more neutral discussion, for example ) can be accompanied or carried by emotional elements.

The everyday and colloquial distinction between the rather vague "strife" and the "dispute" with defined dispute objects, for example during competition or in litigation ( "quarrels and disputes"); The term “quarrel” is mostly used in a neutral or ambivalent way, whereas the term “quarrel” tends to have a derogatory connotation (“argumentative” versus “quarrelsome”).

The standard high German language also differentiates between the terms "discord" (a conflict that disrupts " unity ") and "strife" (a "bitter", persistent dispute, also a dispute with weapons , a hostile argument or even a war ): "sow discord and strife", "[...] far boils and surges of strife." .

A dispute is often caused by social framework conditions; this includes conflicts of interest between individuals or groups as well as ongoing rivalries . As a rule, different or non-agreed orientations - assessments or action plans - play a central role with regard to a certain issue .

The open outbreak of a dispute is colored by personal characteristics such as jealousy , hatred , envy and lust for fame and requires a cause. These occasions can be as weighty as they are trivial. A prerequisite for a dispute is also the willingness of the actors to lead a dispute, ie to "argue".

The Tuileries and Samuel Goldenberg and Schmuyle in the pictures at an exhibition by Modest Petrovich Mussorgsky are enchanting examples of “quarrel” .

"Any better and self-respecting argument remains in the dark about who broke it until the victor states that it was the loser."

In most of the German federal states there are bodies for dispute settlement ( dispute resolution ) to prevent legal disputes. The arbitration is intended to help the parties involved deal with the situation objectively and arrive at a peaceful solution that the parties involved can accept. There is no uniform procedure, as the requirements vary depending on the dispute, parties and interventions, for example by the legislator. To settle disputes between consumers and entrepreneurs , the EU has issued a directive on alternative dispute resolution in consumer matters, which was implemented in Germany with the Consumer Dispute Settlement Act .

Dispute settlement is maintained or developed in many educational institutions ( schools , daycare centers ). Through practice, children should be enabled to verbally follow disputes in social groups in order to further develop their skills (see social competence ) for dispute settlement (or verbal regulation of disputes). In the course of this notion, quarreling is seen as a normal occurrence in a social group or as an event in which multiple interests become evident. Now it is important to coordinate the conflicting interests peacefully and as productively as possible (for group life).

In sociology , “dispute” is a term introduced by Georg Simmel in his sociology in 1908 , which today is mainly treated as “ social conflict ” in technical terms . A common form of dispute in society is election campaigns or industrial disputes .

In many educational institutions nowadays there are attempts to let contending parties regulate their problems themselves, after one has developed something like a mediator competence among the participants. This possibility of regulating different orientations has been introduced in many schools. Similar experiments are also made in kindergartens. The following aspects play an important role in educational efforts:

In the more recent pedagogy one clearly starts from positive perspectives in connection with the settlement of arguments and arguments. The focus is not only on the fact that the atmosphere in groups that have learned to regulate their quarrels themselves is better than in groups in which the quarrel is suppressed or regulated from above. The dispute resolution competence acquired by someone who can work productively in groups is also highly valued.

The topic is not new, however, because in the anti-authoritarian education of the twentieth century, the possibility of regulating conflicts on an equal footing played a central role.

In sport , the term appears as a competition (in ancient Greece as αγων, agon [pronounced: "agoon"], culturally significant and reaching beyond sporting competition.)