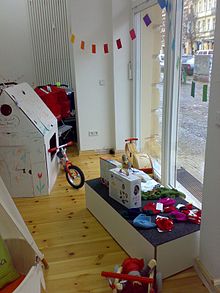 A children's shop in Berlin-Prenzlauer Berg

A children's shop in Berlin-Wilmersdorf

A children's shop is a self-administered ("alternative") kindergarten , mostly run by independent sponsoring associations (often parents' initiatives ) in which children of preschool age are looked after. On average, 15 to 19 children are cared for in each children's shop. Especially in the early days of children's shops, in the 1960s and early 70s, former shops were used because many smaller shops had to close due to the rise of supermarkets and therefore shops were cheap to rent, hence the name Kinderladen . Similar projects, which are primarily aimed at school children, are called schoolchildren's shops . Some children's and youth recreational facilities are also called children's stores.

Even today, children's shops are an alternative to municipal and church institutions, although today they are usually not called “children's shops” (rather: parents' initiative). - "Incidentally, the first children's shop in Berlin was realized by two men (Lothar Binger and Peter Umbsen) in Kopfstrasse (sic!) In Berlin-Neukölln."

In the GDR, too, there was a free, non-governmental children's shop in the East Berlin district of Prenzlauer Berg at the beginning of the 1980s , which was organized in changing private apartments for a quarter of a year after the closure by the Stasi (after the eviction the entrance was bricked up), among other things also briefly in Christa Wolf's apartment . Ulrike Poppe was an initiator and received a prison sentence. The children's shop was a parents' initiative, but the carers always came from outside. The inspiration for the children's shop was the book Time for Children by Ekkehard von Braunmühl . A picture of the children's shop hangs in the Stasi Museum in Berlin-Lichtenberg.

Children are looked after in smaller groups here and the number of educators and the staffing key are usually much higher than in other institutions, which enables more intensive educational contact with the child.

A large number of different design options are practiced for the areas of cooking, cleaning and covering illness.

The commitment of all those involved is linked to the possibility of being able to guarantee more individual care for the children in the small children's shops than is the case in large institutions.