This article deals with the large retail supermarket. For the 1974 film of the same name, see supermarket (film) , for the RBB magazine see SUPER.MARKT - News for consumers .

Tesco in Most (Czech Republic)

A supermarket (from Latin super , "over, above, beyond ..." and Latin mercatus "trade"; English super market ), also known as a department store in parts of Germany , is a form of retail trade with large sales areas where merchandise is sold self-service for customers are available.

A supermarket is a food retail business, i.e. a type of business with a sales area of ​​at least 400 m² and less than 1500 m², which sells groceries including fresh products in self-service and in which the proportion of the sales area is for products that are not intended for consumption, does not exceed 25 percent. After the customer has removed the goods, the customer pays them at the central cash register . In addition to conventional checkouts, self- service checkouts can also be used. Prices are marked on the goods , they are not negotiated. As a rule, discounts or sales add-ons are not granted, except for a pre-determined customer group, such as holders of customer cards. There are also no loans to customers, you can not "write". Goods are mainly offered for sale in packaged form with certain filling quantities. Fruit, vegetables or other loose goods must either be weighed by the customer himself or, if provided, weighed by the workforce on special weighing platforms at the cash register.

The term supermarket was not in use in the GDR . Instead, the term Kaufhalle was used for this form of sale developed in the late 1960s.

In the meantime, the term “supermarket” has become commonplace in domain names, in each case in connection with a description for a product group, also for senders on the Internet. These senders often, but not exclusively, send groceries. Sometimes services are also provided. “Supermarket” should show the visitor that it is a shop. Sometimes it should also suggest that the selection is large and the prices are cheap, which does not necessarily have to be the case. Examples are virtual supermarket, auto parts supermarket, hotel supermarket, last minute & shysupermarket, travel supermarket, gluten-free supermarket, Gothic supermarket, carpet supermarket.

The large retail space allows, in contrast to small stores a larger range (7,000 to 12,000 articles, an average of 10,500) so that in addition to food , luxury foods , foods or sweets ( English food ) and drugstore items , office supplies or other utility or consumer goods ( household - and school supplies ; English non-food ) are offered. Despite the self-service principle, there are also individual service counters (for sausage, meat, cheese). The sales area is composed of the store shelves , the intermediate contact paths , as well as the checkout area ( English front doors ). The storage rooms and administration ( English backstore ) are mostly structurally separated from this . The organization strictly follows sales psychological rules, which range from background music to the placement of fast and slow movers , promotion of impulse purchases and special offers . High rotation and range of goods can sometimes lead to gaps in the shelves , but these should be avoided due to lower customer satisfaction .

Most supermarkets are part of a retail chain with many similar sales outlets. The individual sales outlets can be owned by the trading company or by independent merchants as part of a franchise agreement . Owners of supermarkets can join together to form a purchasing group (association group) in order to purchase goods at reduced prices. Examples of a purchasing community are Rewe or Edeka . Certain supermarkets sell their goods only or at a reduced price to customers who have become members of the company (comrade) by making a deposit ( consumer cooperatives ).

Division according to sales area

Forms of food trade related to the supermarket include: a.

A typical size of retail space for supplying a district or village is 799 square meters. Retail stores with a sales area of ​​over 800 square meters are considered to be "large-scale" in current practice and case law in Germany and are only permitted and appropriate in inner cities (core areas) and in other designated special areas. This regulation led to the outsourcing of departments (very often: beverage market ) to formally separate shops. For a detailed list of the various types of business, see also “ Retail ”.

Differentiation according to assortment

In supermarkets, a distinction is made not only between different store sizes, but also according to the scope of the range . While large supermarkets - also known as full-range retailers - can have up to 40,000 items in their range, some discounters only have around 1,000. In between there is every possible gradation, depending on the size of the retail space and the retailer's basic idea. With regard to the relationship between manufacturer brands and private labels, supermarkets also differ in their offerings. Discounters in particular have a high proportion of private labels in their range. With the increasing trend towards organic trade, there are also special organic supermarkets . In Germany, the average number of items offered in supermarkets has almost quadrupled over the past 50 years from 3,200 (1965) to 11,600 (2015), and the sales area more than tripled. 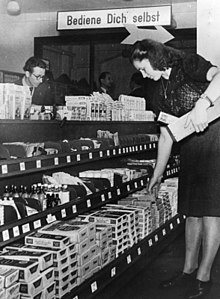 First self-service shop in Augsburg in 1949 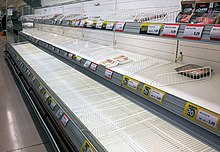 Large food chains with numerous branches had existed in the USA since 1859 at the latest, initially in New York City. Safeway, for example, copied the original business idea of ​​the Great Atlantic and Pacific Tea Company (A&P) and entered the industry in 1915. From 1930 supermarkets in today's sense founded the King Kullen chain. Your name should be reminiscent of the movie hit King Kong at the time . She opened her first store in August 1930 in a former auto repair shop in Queens, New York City. The self-proclaimed price scrapper introduced self-service and the complete range of foods presented in several departments (meat, baked goods, fruit and vegetables). The goods "stack high and sell at low price" was his motto. The former market leader A&P reacted hesitantly and lost half of its market share. By 1950, however, the former quasi-monopoly had adapted to the new development and recaptured at least a third of the US market. The large shopping centers "on the green field ", the shopping malls, presented a new challenge .

With the self-service principle, which is said to have introduced the Piggly Wiggly chain before King Kullen , pre-packaged goods and more brand names also found their way into stores.

The Migros at the Seidengasse in Zurich was changed on 15 March 1948 at the self-service concept. It was the first self-service shop in Switzerland. Gottlieb Duttweiler based himself on the American model. In the first two weeks, sales increased by 30%.

In Germany, the first self-service shop was opened in 1938 as the predecessor of a supermarket by Herbert Eklöh in Osnabrück . Previously, the Hamburg consumer cooperative production had set up a sample shop in 1926 for demonstration purposes.

Only after the Second World War did the retail trade, for example the Edeka network around 1954, gradually switch to self-service. As one of the first self-service shops in West Germany, a shop for the production cooperative was set up in 1949 at the Berliner Tor in Hamburg . On September 26, 1957, Herbert Eklöh opened the first American-style supermarket in the Rhineland Hall in Cologne with a sales area of ​​2,000 square meters, a gigantic store for the time. It no longer exists today. From 1959 other products were offered besides the food. 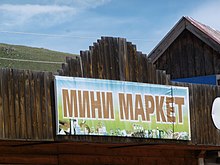 As the first self-service shop in Austria, KONSUM was opened on May 27, 1950 in Linz on Vienna's Reichsstrasse, today: Wiener Strasse in Linz. A slogan was: self-service saves time.

The term has established itself worldwide and is used in rural areas, for example all over the American continent, for small local shops where the customer brings the goods to the counter. Less ambitious shopkeepers also use the lettering Minimarkt for such shops .

Scheck-In Center in Karlsruhe, Germany's supermarket of the year 2003

Separate alcohol check-out in a Lidl in Slubice, Poland 2010

The principles of sales psychology are particularly implemented in supermarkets by retail chains and subsequently by other operators. The most striking rule is that shelves are filled according to a certain principle. At the top there are articles that are difficult to reach ( stretching zone ), in the middle there are products that should be sold in the best possible way due to their high profitability ( viewing zone ) and at the bottom are articles that provide a weak marginal yield ( bending zone ). Occasionally, manufacturers influence the retailer's decision as to which area an item should be found in and are then willing to pay different premiums depending on the placement. Finer divisions are also used, as the Neue Zürcher Zeitung mentions in a specialist article:

The viewing and gripping zones are reserved for the well-known and / or most profitable goods. Cheaper products, trademarks , no names or manufacturer's brands whose trademarks are little known are usually classified in the stretching or bending zone, so that a complementary product is in the field of vision when it is removed and additional purchase incentives are triggered. Decisions about shop design, placement and presentation of goods in the supermarket are among the most important decisions in retail marketing : “The hundreds of article groups not only have to be allocated the appropriate space quantities and qualities ( space management ), but each individual article must also be psychotactically optimal to be placed."

Comparison between Europe and the United States 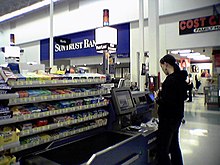 Self-service checkout in an American Wal-Mart branch. The customer scans her goods here herself and pays by credit card .

Self-service cooling shelves filled with beer in a US supermarket

The warehouse clubs such as Costco , Sam's Club and BJ's Wholesale Club are comparable to the European consumer cooperatives . These are supermarkets with a comparatively inexpensive range of goods, in which only members can shop, whereby membership can be purchased by anyone for a fee. Discounters, on the other hand, are not very common in the USA, the branches of the Aldi group being an exception .

American supermarkets differ from corresponding European markets particularly in terms of service. The cashiers not only settle accounts, but also weigh fruit, vegetables and other loose goods at the checkout and pack the goods in bags. Some supermarket chains (e.g. Tops ) offer their customers, in addition to conventional checkouts, self-service checkouts in some branches, at which customers can scan their goods themselves and pay cashlessly. In Europe, such cash registers occur particularly in France and in individual markets in Switzerland (Migros) and Germany (Real). Many companies have employees available to help the elderly or those with young children stow the goods in the car. Not only shopping trolleys with small child seats or baby seats are common, but also trolleys with seats for two children and electric scooters for customers with walking difficulties. Most major supermarket chains have branches open around the clock, almost 365 days a year. Due to the higher costs, these services lead to a price level that is above the European, especially above the price level in Germany.

The growing number of supermarkets has been blamed for the disappearance of small retailers and the increased reliance of customers on cars. The increasing trend to drive to the supermarket or shopping center also has a negative impact on the ecological balance . This effect is greater than the long transport routes of previously exotic goods such as bananas or orange juice. The fact that the supermarket is the food distribution form with the highest proportion of personnel costs was largely ignored. As a rule, the proportion of personnel costs is well over 10% of gross sales and thus around twice as high as that of a grocery discounter.