Most ( German  Brüx ) is an industrial town in the Ústecký kraj (Aussiger region) in northern Bohemia .

The city of Most in Okres Most is located on the Bílina (Biela) river in the North Bohemian Basin .

The city of Most consists of eight districts with 61 basic settlement units. The urban area is divided into 18 cadastral districts.

The Czech word Most means "bridge". The city of Brüx was created in connection with the so-called state development in the southern Erzgebirge foothills and in the Erzgebirge at the end of the 12th and beginning of the 13th century. The state development was part of the medieval German eastern settlement . The city was probably laid out in the 1220s by the Hrabischitz dynasty with the support of the monastery of the Kreuzherren von Zderaz in Prague . According to archaeological research , a wooden bridge allegedly crossed by Ibrahim ibn Jakub to Prague at the end of the 10th century and from which the city is said to take its name is now a legend.

Kojata von Brüx , the last descendant of the Hrabischitz family, bequeathed all of his fortune to the monastery of the Zderaz Cross Lords in 1227 . Probably in 1229 and at the latest in 1238, the town passed into the possession of the Přemyslids . The oldest archaeological evidence from the excavations in the old town center also dates from the 1230s to 1250s. The oldest town seal dates from 1257. Brüx was a rich medieval royal town with all the rights granted to the town by Ottokar II Přemysl , Johann von Luxemburg and Charles IV . At the end of the 14th century, vineyards were planted along the town . As a result of the resettlement, most of the residents were German .

In the Hussite Wars (1419–1434), Brüx was a center for Catholics. In the period from 1455 to 1515 there were several major fires in the city. During the rapid urban renewal in 1517, Master Jacob Haylmann von Schweinfurt began to build a new deanery church. A new renaissance style town hall was also built. In 1571 Heinrich von Maltitz sat on Brüx and in that year acquired the rule and castle Hoyerswerda in Upper Lusatia. During the Thirty Years' War the city was conquered several times by Swedish troops. In 1646, the castle was on the castle hill for the first and last time Castle Hněvín (state observatory) conquered. The conquerors achieved this through a ruse.

After the Thirty Years War, the city lost its economic and political importance. In the second half of the 19th century, during the industrialization of Germany , coal mining and industry changed the character of the city (sugar factory, porcelain factory, steel mill, brewery). The city museum was founded. In 1870, Brüx received its first railway connection through the Aussig-Teplitz Railway. Especially for the expanding coal mining industry, many workers, predominantly of Czech nationality, were hired to move to Brüx. Around 1930 the seventy years previously purely German city had a narrow Czech majority.

During the floating sand disaster at Brüx on the night of July 19-20, 1895 (9:15 p.m. to 6:00 a.m.), the ground in the northern part of the city sank considerably. Residential buildings, streets and what was then the train station were affected with dramatic effects. The abgeglittene quicksand flowed into stopes of the mine Annahilfsbau and further into the distance forays this mine. Almost 2,500 people were left homeless and three residents died. 25 houses sank, 13 other buildings suffered considerable damage. Similar incursions occurred here in 1896 and 1897. The cause is considered to be a special geological deposit situation in the region, which was made effective by coal mining.

In 1898 the "North-West Bohemian Exhibition for Industry and Commerce" took place in Brüx. 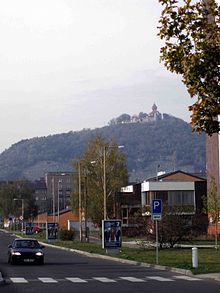 View to the Schlossberg

In 1900 the dressing material factory RICO was built; in 1901, the cities of Most and Kopitz ( Kopisty ) were connected to Johnsdorf ( Janov u Litvínova ) by a tram . In 1911 the then most modern theater building in Austria-Hungary was opened; the drinking water supply of the city was solved from 1911 to 1914 by the construction of the dam Brüx in Kreuzweg ( Křížatky ).

After the First World War, Brüx belonged to the province of German Bohemia for a few weeks . In no other largely German city in Bohemia was the resistance against the Czech occupation as great as here. A first attempt at occupation on November 26th, 1918 by weak Czech troops was rejected by the Brüxer Volkswehr without a fight. On November 27th, battalion-strength Czech military attacked the city from the northeast. After hours of street fighting, the much inferior Volkswehr had to surrender in the late afternoon. The last Germans did not surrender until November 28, after threats had been given to bombard the city with artillery. On the German side there were six dead and several injured; the number of Czech victims is unknown.

On March 4, 1919, demonstrations were also held in Brüx for the right of peoples to self-determination and against the Czech occupation. Unlike in nearby Kaaden , the demonstration in Brüx was not crushed.

Brüx was expanded rapidly until the Great Depression in 1929. Because of the poor economic situation , many residents emigrated to North America or Australia at the beginning of the 1930s. In the Munich Agreement of autumn 1938, the Sudetenland fell to the German Reich , and Brüx was the seat of the district of Brüx , the district of Aussig in the Reichsgau Sudetenland .

Operator of the lignite -Bergwerke (essentially open pit ) in the North Bohemian basin was from June 1939 to the public realm works Hermann Goering belonging Sudetenland Bergbau AG (SUBAG) based Brüx. To the north of it, in the district of Maltheuern, the Sudetenlandische Treibstoffwerke AG (STW) Oberleutensdorf, which was created with a majority stake by SUBAG, built a hydrogenation plant (today Unipetrol RPA - refinery, petrochemicals, agrochemicals) to produce gasoline, diesel and heating oil by liquefying coal . The plants, which were not fully expanded until 1943, had an annual capacity of 335,000 t of synthetic gasoline (mainly aviation gasoline) and were therefore a frequent target of heavy attacks in the aerial warfare of World War II , which caused considerable damage in the area from 1944 onwards. Many German Brüxers and several hundred non-German forced laborers were killed.

From September 1, 1944 to October 7, 1944, there was a satellite camp of the Flossenbürg concentration camp , whose 1,000 prisoners had to do forced labor for the Sudetenländische Bergbau AG in Seestadtl.

On April 1, 1941, the neighboring town of Kopitz and the communities of Rudelsdorf an der Biela , Strimitz and Tschausch were incorporated into the town of Brüx.

After the Second World War , almost the entire German-speaking population was expelled . Her property was confiscated by Beneš Decree 108 and the Catholic Churches of Brüx in Czechoslovakia expropriated .

Many new citizens from Central Bohemia, Slovakia, so-called "repatriants" and Roma settled here. In the 1950s, new settlements were built below the Castle Hill (Hněvín).

In 1964, the Czechoslovak government decided to demolish the old town, and from 1967 to 1982 the city was gradually completely demolished in favor of coal mining and rebuilt as a prefabricated building two kilometers south.

Part of the demolition work was carried out by a film team from Metro-Goldwyn Mayer for the production of the Hollywood film Die Brücke von Remagen . The film team shot the fight for downtown Remagen in Most. During the shooting, film technicians blew up buildings in rows while the film soldiers played war.

View from the castle to the southeast: on the left the churches of St. Valentin and Mariä Himmelfahrt, on the left of the 4-lane road the railway line with the main train station, on the right of Tesco the football stadium with the adjacent low-rise sports hall, in the foreground the museum, on the right ( hidden) the restaurant Schwejk

The Jan Hus shaft was created to accommodate open-cast coal mining, which forced the removal of the old town and destroyed all historical structures. After the city center was blown up in the early 1970s, an old residential area from the end of the 19th century below the castle and a number of buildings from the 1920s were preserved.

Life in Brüx / Most and the entire region was shaped by heavy industry, coal mining and the chemical industry. At the end of the 20th century, a reorientation towards light industry and services began. However, the focus is still on lignite mining and the recultivation of the landscape devastated by the opencast mine.

Recultivated areas are used for recreation and swimming purposes, but also for fruit and wine growing. The Autodrom Most is especially well known among motorsport enthusiasts . At the time of the Iron Curtain, the events on this racetrack were also a very popular meeting place for motorsport fans from the GDR .

The city theater that was built in the new city is a modern building that has become Most's landmark.

On the local mountain of Brüx, the Hněvín (castle hill), there is the Landeswarte castle, but this is not a medieval castle, but a historicizing restaurant from 1906, in which preserved parts of the old castle ruins were included.

Across from Hněvín, the Orthodox Church of St. Valentin erected; the wooden church was destroyed on October 29, 2017 by the autumn storm Herwart , which tore down the 23 m high church tower.

Until 1945, Brüx was mostly populated by German Bohemia , which were expelled.

View from the castle to the south

Church of the Assumption

All that remains of the old Brüx is the historically valuable deanery church of the Assumption of the Virgin Mary , the former parish church , which was moved 841 m on an arched railroad track in 1975 in a spectacular action and at great expense without its foundations. As a result, their alignment at their new location deviates from the original position by 90 °.

Next to the Marienkirche is the former hospital church of the Holy Spirit from the 14th century.

Sculptures at the Assumption Church

The following sculptures were re-erected at the Marienkirche:

Sculptures in the new town of Most

The following sculptures were repositioned in the Neustadt:

The area of ​​the Autodrom Most from a bird's eye view

The Autodrom Most is a permanent racing circuit that is located in the immediate vicinity of the city of Most. In the summer of 2016, the race track, famous for hosting the “Czech Truck Prix”, celebrated its 33 year anniversary.

During the founding period, numerous factories were built here, most of which no longer exist today:

The settlement of companies is currently concentrated in the industrial area "Joseph", southwest of the city on trunk road I / 27.

Most has a hub station, which is served almost every hour by inner-Czech express trains (R). There is an hourly service to Prague or Cheb via Karlovy Vary (Karlsbad). Many localities can be reached from Most train station by regional or express trains (Os / Sp).

The Most – Litvínov tram runs between Most and the neighboring town of Litvínov with 5 lines and a total length of 68 km. These two cities were connected by a trolleybus line from 1946 to 1959 . There are also several bus routes in the city.

Most has a regional airport.

→ Main article : List of personalities of the city of Most

Commons : Most  - collection of pictures, videos and audio files

Towns and municipalities in Okres Most (Brüx district)