Nová Ves v Horách (German Gebirgsneudorf , formerly Rottendorf ) is a municipality in the Okres Most in the Czech Republic .

The municipality of Nová Ves v Horách is located in the northwestern part of the country in the Bohemian Ore Mountains on the border with Saxony . 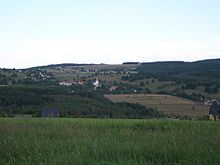 Ruin of the Church of the Archangel Michael

1564 was the first written mention in Hamfescht , issued at the Hněvín Castle in Brüx . The growing mining of ore and coal probably led to the foundation of the community. In 1585 the Brüx Castle and all the parishes were sold to Ladislav von Lobkowicz . In 1591 Bohuslav von Lobkowicz destroyed the Protestant church.

In the 19th and 20th centuries, the population was mainly engaged in agriculture, the timber industry and the manufacture of toys. A large part of them worked in the mines in Saxony. After the end of World War II until 1947, the German residents about the internment were, according to the Benes decrees , expelled .

Towns and municipalities in Okres Most (Brüx district)