Ancestral coat of arms of the Popel von Lobkowitz family 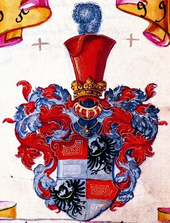 Coat of arms of the von Lobkowitz family since 1479

The Lobkowitz family (Czech spelling Lobkowicz or Lobkovic ) is one of the oldest noble Bohemian noble families . Today's branch of the old Bohemian family, which is still represented by numerous people in the Czech Republic and other European countries, originally had the family name Popel (German: Asche). They were knights and lords who served dynasty of Premyslid and house Luxembourg . They accepted the noble title of Lobkowitz (Czech z Lobkovic ) when Nicolaus de Újezd ​​bought the Lobkowitz ( Lobkovice ) manor with the castle of the same name in 1408 .

The oldest family member mentioned in writing was the knight Mareš z Újezda ( Maresch von Aujest ). He came from the village of Újezd ​​u Jestřebí (German Aujest bei Habstein ) not far from Bohemian Leipa and lived during the times of the emperor and Bohemian king Charles IV. 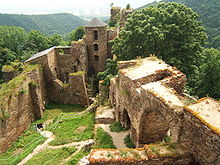 His son Nikolaus I. Lobkowitz von Hassenstein , Nikolaus (the poor) ( Mikuláš Chudý Hasištejnský z Lobkovic or Mikuláš I. "Chudý" z Újezda a z Lobkowic , Nikolaus "the poor" from Aujest and Lobkowitz), married to Anna z Nechvalic († before 1411) and Žofka (* 1412), contrary to his nickname, was one of the richest and most influential men in Bohemia. He became a clerk in Kuttenberg in 1401 and received several goods from King Wenceslaus IV for his services , including Lobkovice nad Labem ( Lobkowicz ), which were the basis for further growth. In 1417 he was appointed the highest land clerk in Bohemia , in 1418 he also received the rule of Hassenstein ( Hasištejn ) from King Wenceslaus, initially as a pledge, since 1419 as a hereditary crown fief, as the king was only able to successfully siege the castle there with his support.

Under Emperor Sigismund of Luxembourg, with whom he was also in high favor, Mikuláš Hasištejnský z Lobkovic acquired the royal castles Pfraumberg ( Přimda ) and Brüx ( Most ) as well as the Fürchtenberg Castle and the town of Mährisch Schönberg ( Šumperk ) in Moravia . He ceded this property to the Bohemian King Sigismund in 1421 in exchange for the crown rule Frauenberg ( Hluboká nad Vltavou Castle ). Furthermore, he was enfeoffed with the Leitmeritz Castle , the Platten Castle , parts of the rule Klingenberg and the city of Komotau ( Chomutov ).

His two sons started two lines of the family. Both brothers, Nikolaus and Johann von Lobkowicz, were in 1459 by Emperor Friedrich III. raised to the imperial baron status. Only in 1479 the sex in the Czech was Mr. Booth ( Panský stav ) levied. In the Kingdom of Bohemia, no further classifications were formally made at this stage.

The elder Nicholas II received the Hassenstein Castle (Hasištejn) as heir and from then on called himself Nikolaus Lobkowitz von Hassenstein ( Mikuláš II. Hasištejnský z Lobkovic ). The younger brother Johann received the family name Popel von Lobkowitz ( Jan I. Popel z Lobkovic ). Frauenberg Castle (Hluboká nad Vltavou) near České Budějovice . Both branches of the family initially belonged to the utraquist party of the Bohemian nobility. The Lobkowitz boogers converted to Catholicism at the end of the 16th century. 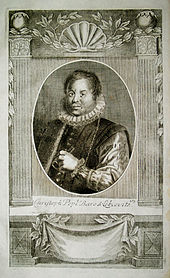 The Popel-Lobkowitz line split up in the 16th century through division and the acquisition of new estates into several branches of the family, named after their possessions, lords of Dux , von Bilin , von Tachau and von Zbiroh . The youngest branch of the Popel-Lobkowitz was named after the Chlumec Castle, owned since 1474, Chlumetzer Zweig . From this branch the Neustädter , the Raudnitzer and the Hořín - Mělník branch emerged. All of the princes come from the Popel von Lobkowitz line.

When the Communists came to power in 1948, all branches of the Lobkowitz family in Czechoslovakia were largely expropriated, as had been the case before by the Nazi occupation regime. After 1948, some members of the family therefore emigrated. a. to the USA , later to Germany or Switzerland . All of the members of the extensive Lobkowitz family who had returned, as well as those who remained at home, were able to regain parts of their former property due to the restitution laws of 1991. 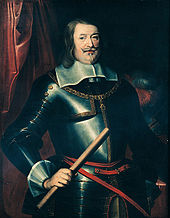 Owner of the family estate since 1918

The Czechoslovak Republic revoked the titles of nobility on December 10, 1918. According to German nobility law , which also applies to the former crown lands of the Habsburg monarchy and is officially documented in the Genealogical Handbook of the Nobility , the head of the house continues to bear the nobility title Prince Lobkowicz, Duke of Raudnitz and the other members of the house the title Prince or Princess (addressed Your Highness ). In Belgium, the Lobkowicz with the equivalent salutation "Altesse Sérénissime" belong to the princely and ducal noble families by royal Belgian decree of August 31, 1957 and diploma of February 12, 1958.

Heads of the Lobkowicz House

Four golden, crowned helmets rest on the shield . Helmet 1: Lobkowitz's helmet ornament . Helmet 2: the Pernstein aurochs head. Helmet 3: belonging to Sternstein: six little red-bordered, silver flags, on red sticks, and helmet 4: a shield (umbrella board) sheathed in red and silver and topped with peacock fronds of three feathers, belonging to the Silesian Sagan (from the coat of arms of Duchy of Glogau ).

Name bearers of the past

Name bearers of the present 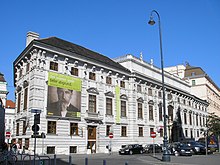 The Lobkowitz Palace in Vienna 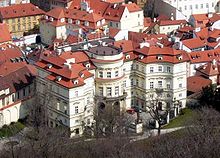 The following Lobkowicz castles can currently be visited:

Czech properties returned to the family after 1990

After the Velvet Revolution, various branches of the family was transferred back to a series of possessing, in particular, the Lobkowicz Palace in the Prague Castle (now a museum), Nelahozeves (now a museum), Schloss Roudnice (Raudnitz) Střekov (Schreckenstein), Castle Křimice in Pilsen , Mělník Castle (winery) with Hořín Castle, Bílina Castle and Drahenice Castle, Dolní Beřkovice Castle (today the Thurn and Taxis family ), as well as the Jezeří Castle (Eisenberg) and Vysoký Chlumec Castle , which were later sold again .