Family coat of arms of the von Korff family

Korff (also Korff-Schmising ) is the name of an old Westphalian noble family . The family, some of which still exist today, is one of the oldest rural aristocratic families in the Münsterland . Branches spread to Livonia and Courland with the Teutonic Order .

The family first appears in a document in 1241 with the knight Henricus Corf . Since 1354 part of the family has been using the surname Schmising (also Schmysing or Schmysingk ).

In 1254, the knight Henricus Korff came from the county of Mark an der Lippe to Vuchthorpe ( Füchtorf ) and married Ludmodis, the heir to the knight who lived there. The family lived in the castle on the current church square.

In 1309 his son, Henricus II, used the abundance of water to build a fortified castle on the Sytherkamp. It consisted of two wings with a narrow middle part. Since the boggy subsoil did not allow a solid foundation , the castle and the outer buildings had to be built on spruce and oak piles. The castle complex was surrounded by several grave rings in order to be better protected from enemy attacks. During this time, looting and raids were the order of the day. Henricus II married the heiress Wigburdis (Wibbecke) von Varentrob ( Varendorff ), who inherited the Gogericht von Warendorf. The Gogericht consisted of 9 parishes. It was not only a good source of income, but also strengthened the power of the family in the Warendorf district. Henricus II spent his twilight years in the Marienfeld monastery , where he also died and was buried.

The original seat of the von Korff family was Harkotten Castle in the Prince Diocese of Münster . Between 1297 and 1309 built Heinrich II. Von Korff as Lehnsmann the diocese Münster a Wasserburg to secure the diocese borders to Osnabrück . After his death in 1334, his two sons Heinrich and Eberhard divided the property between them. The division not only included the castle and the outbuildings, but also fields, forests and bodies of water. Legend has it that the division was made by dice. When he was called "Smiet in", the older son Henricus rolled the eastern part of the castle and called himself "Korff-Smising" (Smising) from then on. Possibly one could suspect a sound shift from "Smiet in". In 1375 Hermann von Korff-Schmiesing, son of knight Heinrich von Korff, was the landlord of the eastern Harkotten Castle. Everard Korff received the western part of the castle. Since that time there have been two separate mansions on the site . Everard's descendants live in direct succession to this day in Harkotten, where today's Korff'sche Castle was built from 1804 in place of the previous building from the 14th century. The eastern castle has belonged to the Barons von Ketteler since 1615 until today .

From Harkotten, the family spread to Westphalia as well as Livonia and Courland , where, for example, the Aiswicken estate in the Hasenpoth district was owned by the family for 13 generations from 1508 to 1930, and also to East Prussia and Russia .

The Swedish Gate in Preekuln with Korff's coat of arms, built in 1688 as an entrance to the estate, which had been in Korff's possession since 1483. 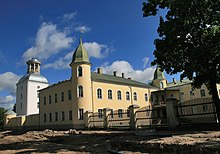 In the second half of the 15th century Nicolaus Korff appears in Courland with the Knights of the Teutonic Order . The master of the order gave him the rule of Preekuln in 1483 . He was married to Anna von Pattkul from the Mohjahn family. His grandson Christian Korff, Herr zu Tecken , was the founder of a branch line named after this seat. Nicolaus II, owner of Preekuln, continued the main line. He became a royal Polish colonel and councilor of war . For his services Nicolaus was founded by King Stephen in 1585 with the Veste Kreutz castle invested . Christian II (* 1595) inherited Preekuln, Nicolaus III from his sons from his marriage to Gertrude von Rosen. (* 1585) Kreutzburg and Wilhelm (* 1604) Föhmen in Lithuania .

Nicolaus III. Korff was the royal Polish envoy to the royal Danish court, including Vojwode von Senden and Kokenhusen and Starost zu Geesewiczy and Wobolnik . His son Nicolaus IV (* 1615) received, in addition to his father's possessions, by marrying Anna Magdalena von Rappe , the Tels and Rolof estates in Courland and Bledau in East Prussia.

Nicolaus V. (* 1648), son of Nicolaus IV, was the sole heir of the entire property, which he was able to expand considerably by marrying his cousin Anna Dorothea Korff, heir to the preekuln estates. In 1707 he made Preekuln a majorate for his eldest son Christian III. (* 1676). This died without descendants, whereupon the majorate to his brother Nicolaus VI. fell. Through his marriage to Constantina Ursula von der Walen, the Nerft and Salwen estates came into family ownership . He became the progenitor of three other lines through his three sons, Benjamin Christian, Friedrich Siegmund and Nicolaus Ernst . The line of Benjamin Christian (1724–1748) became extinct with the death of his grandson Hermann (1773–1834). Friedrich Sigmund (1730–1797), among others, Herr auf Brucken, Schönberg, Nerft, Salwen, Memelhof , Tanjamen and Loberez , Imperial Russian Privy Councilor , founded the Brucken-Schönberg branch. Nicolaus Ernst (1734–1787), master of all Kreutzburg estates and royal Polish chamberlain , founded the Kreutzburg line, which remained in the possession of Kreutzburg until 1920 .

With the following lines and subsidiary lines, some of which were given the status of barons and counts , the sex is one of the richest families. An important representative from the Preekuln line was Modest Freiherr von Korff (1800–1876), son of Baron Andreas von Korff, who died in 1823. He was an important Russian statesman and, as president of the imperial public library, played a major role in its expansion. In 1872 he received the Imperial Russian Count status.

From the Westphalian main line of the family came Clemens August Freiherr von Korff, known as Schmising, former chief court marshal of the elector of Cologne and the prince-bishop of Münster. He was raised to the Prussian count status in 1816 and founded the count line in Westphalia. His grandson Count Klemens von Korff , Herr auf Tatenhausen , became a member of the royal Prussian manor house and district administrator in the Halle district .

The simultaneous existence of imperial German and German-Baltic family branches for many centuries , i.e. older and younger lines who remained resident in their original homeland, who emigrated to the monastic land and settled there in the Middle Ages, can also be seen in other noble families, according to the Vietinghoff , the Frydag / Freytag-Loringhoven, the Wenge / Lambsdorff , the Lüdinghausen called Wolff or the Waldburg-Capustigall . The Ketteler , which is still neighboring the Korffs in Harkotten , were the dukes of Courland and Semgallia from 1561 to 1711.

Matriculation with the 1st class of the Courland Knighthood on August 2, 1631 for Alexander Korff , Courland governor and knight bank judge; Russian recognition of the right to use the baron title through Senate ukas dated September 21, 1853 and April 3, 1862.

Enrollment in the Estonian Knighthood on November 14, 1861 for Nikolai Baron von Korff (1793–1869), Imperial Russian General of Artillery and member of the State Council of the Russian Empire .

Russian count status on January 13, 1872 in Saint Petersburg for the same as Imperial Russian Chamberlain, Real Privy Councilor and President of the 1st Department of the Imperial Council.

Enrollment with the Livonian Knighthood on April 6, 1864 for Nikolai Baron von Korff , lord of the Kreutzburg .

Prussian approval for the continuation of the baron title through the highest cabinet order (A.KO.) of September 8, 1852 in Charlottenburg for Friedrich Freiherr von Korff , landlord of Schönbruch in the Friedland district .

Austrian approval for the continuation of the baron title as a foreign one together with a confirmation of the coat of arms by AE on November 25, 1892 in Vienna for Adolf Freiherr von Korff , kuk captain in the 5th Feldjäger Battalion , and for his siblings.

Prussian approval for the continuation of the baron title on August 1, 1844 in Erdmannsdorf for August Freiherr von Korff , landlord on Harkotten , and his siblings.

Prussian baron primogeniture and linked to the ownership of Sutthausen , Schleppenburg and Osthof (all districts of Osnabrück ) by A. KO. on November 29, 1886 in Berlin with a diploma from April 28, 1887 for Werner von Korff , landlord at Sutthausen, etc.

Imperial baron with “well-born” and confirmation of the coat of arms on September 4, 1692 in Vienna for Friedrich Matthias von Korff called Schmising zu Tatenhausen , squire of Tatenhausen , Willenburg and Wittenstein , Burgmann on the Nienburg near Ostenfelde , Prince-Bishop of Munster Drost zu Cloppenburg .

Prussian approval for the continuation of the baron title by A. KO. of 23 August 1846 for Heinrich Freiherr von Korff , landlord at Gut Waghorst , royal Prussian district administrator of the Minden district .

Prussian nobility as "von Korff" by AKO on March 27, 1852 in Magdeburg with subsequent Prussian name change to "von Korff-Krokisius" by AKO on August 17, 1852 in Putbus for Edmund Krokisius , Prussian lieutenant in Uhlan Regiment No. 6 , Stepson and adoptive son of the aforementioned Prussian district administrator Heinrich Freiherr von Korff zu Waghorst.

The family coat of arms shows a golden lily in red . On the helmet with red and gold covers, the lily held by two red-rimmed mermaids with blue tails, overlaid by three gold stars.

The family has a lily in their coat of arms, the symbol of the French kings. Once a Korff in the promised land of Louis the Saint defended the attacking Saracens with sword and shield in a battle until the Templars came to the rescue and the Christians, who believed the battle had already been lost, won the battle.