Coat of arms of those
of Kerssenbrock

Kerssenbrock , also Kerßenbrock , is the name of an old East Westphalian and Lippe noble family . The lords of Kerssenbrock belong to the ancient nobility in the Ravensberger Land . Branches of the family still exist today.

The family is first mentioned in a document in 1265 with Johannes Kersebroke as Drost of the Counts of Ravensberg . The trunk row begins with him . Earlier spellings of the name were Kersenbroik , Kersenbruck , Kerstenbruck , Kärsenbruck , Kerssenbruch or Kessebrock .

Kerßenbrock, the family home of the same name, is now a farming community from Wellingholzhausen , a district of Melle in the Osnabrück district in Lower Saxony . The earliest feudal estates of the von Kerssenbrock family were located there .

In the 16th century the family was divided into a Catholic and a Protestant line. 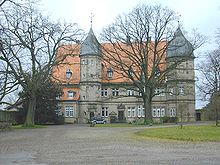 Barntrup Castle , owned by von Kerssenbrock since the 16th century

The headquarters of the Protestant line is Barntrup Castle in the former county of Lippe , which is still family-owned today.

Dedo von Krosigk (1925-2008), counselor , nephew and adopted son of Lucie von Kerssenbrock on Barntrup received on September 1, 1972 a nobility legal non-objection to the name form of Kerssenbrock von Krosigk by resolution of the committee for nobility issues of the German aristocratic associations Marburg an der Lahn . The Barntrup manor is now owned by the Krosigk male line.

The Catholic line , which owned Brincke Castle , among others , came to the Paderborn , Osnabrück and Hildesheim monasteries with several relatives , where they held high ecclesiastical offices. The line expired on October 23, 1754 with the death of Ferdinand von Kerssenbrock . He appointed his cousin Fritz Ferdinand Freiherr von Korff as heir. Brincke came as Fideikommiss together with the Kerssenbrock name and coat of arms to the Schmising-Kerssenbrock called by Korff .

Brincke Castle, ancestral seat of the Catholic line (until 1754)

One of the most important goods of the family is Brincke, acquired in the second half of the 14th century, with Brincke Castle in the county of Ravensberg or in its Vogtei Borgholzhausen . The Ravensberg castle man Johann von Kerssenbrock acquired it in 1357 for 600 "full-weight" guilders , that is 2124 g of gold . The castle is one of the oldest water castles in the county and one of the old provincial estates Ritter seats. Ferdinand von Kerssenbrock was inherited in 1754 by his cousin Friedrich Ferdinand Freiherr von Korff called Schmising, who took the name Freiherr von Korff called Schmiesing-Kerssenbrock ; his descendant Clemens August, electoral Cologne council and prince-bishop Münsterscher Obermarschall, was raised to the Prussian count status in 1816. The Counts of Korff called Schmising-Kerssenbrock-Praschma own the Brincke house to this day.

Members of the family were later able to acquire property in Hanover and Prussia . The oldest Lüneburg feudal letter was issued in 1639. In the later Kingdom of Hanover, the family belonged to the knightly nobility of the Lüneburg landscape by owning the Burgdorf estate . In the Kingdom of Prussia, Bernhard von Kerssenbrock , Prussian District Administrator, had been wealthy since 1827 on Helmsdorf , an old property and entails , and Heiligenthal in the former Mansfeld Lake District . Hermann von Kerssenbrock, Prussian cavalry captain in the Guard Cuirassier Regiment , was lord of Helbra (as Fideikommiss) in the Mansfeld lake district, at the same time the Beveringen estate in the former Saatzig district in Pomerania was owned by the von Kerssenbrock family. Otto Graf Kerssenbrock acquired the Tralau estate in Schleswig-Holstein in 1932 . The Hopen Castle in Lohne has been owned by the family since 1948 .

The coat of arms shows in gold a blue diagonal bar covered with three silver roses ( Lippe Rose ). On the helmet with blue and gold helmet covers an open, golden flight , which is covered with the bar inwards.