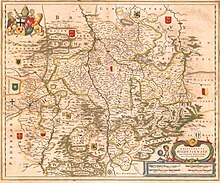 Map of the principality around 1643

The territory of the Hochstift Hildesheim comprised the Hildesheimer Börde with the city of Peine in the north and extended to the south of Hanover . To the west of Hildesheim it stretched into the Leinebergland with the cities of Elze , Gronau and Alfeld . In the southwest, Freden and Lamspringe were still within its borders, as was the western Ambergau with the central town of Bockenem and the southern official seat of Bilderlahe . In the east, the Innerstetal with Baddeckestedt and Ringelheim up to the Harz border immediately in front of the walls of the Free Imperial City of Goslar as well as the northwestern Harz foreland around Liebenburg up to the Oker with Ohrum in the northeast, with Schladen and Vienenburg, were part of the principality . In addition, the area around Dassel am Solling was part of it as a larger exclave . The Principality of Hildesheim was thus smaller than the spiritual diocese of Hildesheim.

Since 1500 the Hochstift belonged to the Lower Saxon Empire .

Palas of the protective and stronghold of Steuerwald , de facto bishop's residence until 1573

The diocese of Hildesheim was founded in 815 by Ludwig the Pious . The Saxon Gau Astfala formed the core area of ​​the diocese. In the following period it was able to acquire property on the Moselle , in the Odenwald and in the Harzgau county . In 1310 the county of Dassel was added. On August 15, 1235, Bishop Conrad II achieved official recognition as a sovereign principality at the Reichstag in Mainz . At the Battle of Dinklar on September 3, 1367, the Hildesheim Bishop Gerhard won over Duke Magnus of Braunschweig after the Braunschweig had plundered the area of ​​the bishopric.

At the beginning of the 16th century, the bishopric came into conflict with parts of the Hildesheim nobility and the Duchy of Braunschweig-Lüneburg . This led to a military conflict in 1519, the so-called Hildesheimer Stiftsfehde (1519–1523). It ended with the Quedlinburg Recess of May 13, 1523. This treaty laid down the military successes of the Guelphs on Hildesheim territory.

For the Hildesheim monastery, the contract meant the loss of the large monastery and the future change to the so-called small monastery . The episcopal sovereignty, which consisted of 22 offices until the collegiate feud, was now limited to the offices of Steuerwald, Marienburg and Peine as well as the cities of Peine and Hildesheim, which, however, was largely subject to the special protection of Duke Erich von Calenberg . In addition, the Dompropstei belonged to it with a few villages north of Hildesheim, such as Borsum , Harsum , Achtum and Algermissen . The Peine office had also come into pledge possession of the city of Hildesheim since 1522 , in which it was to remain for the following eighty years. The Guelphs were able to enlarge their territories at the expense of the pen. However, the Hildesheim Monastery, reduced to a quarter of its original territory, had ceased to be an independent power factor under the North German rulers.

The Hildesheim bishops Balthasar Merklin (1528–1531) and Valentin von Teutleben (1537–1551) did not visit the Hildesheim Monastery. This favored the spread of the Lutheran doctrine in the Small Pen. In 1542 the city of Hildesheim joined the Reformation . From then on, civil rights were only granted to those who professed the Lutheran denomination. In 1556 , Adolf von Holstein , who held the office in lien, introduced Lutheran teaching in the tax forest office. Under Prince-Bishop Ernst von Bayern (1573–1612) recatholization began in the office that had since been redeemed . In many places the population initially resisted. Some places such as B. Kemme and Schellerten ultimately remained Lutheran.

In 1643 the disputes between the Hildesheim monastery and the dukes of Braunschweig and Lüneburg were settled with the Hildesheim main recess. The large monastery fell back to the duchy of Hildesheim. The administration took place in 16 offices. Around 90% of the subjects of the Catholic Prince-Bishop of Hildesheim were henceforth of the Lutheran religion. Due to the normal year ( Peace of Westphalia ), the bishops were unable to change this ratio significantly. The so-called Stiftsdörfer ( Algermissen , Bettmar , Borsum , Detfurth , Diekholzen , Dinklar , Förste , Giesen , Harsum , Ottbergen and others), however, remained mostly Catholic.

In 1802 the prince-bishopric lost its sovereignty to Prussia , to which it belonged until 1807. In the Napoleonic period between 1807 and 1813 it belonged to the Kingdom of Westphalia . For this short period of time, the state of Hildesheim was the Hildesheim district with 16 cantons in the Oker department . In 1813 it was added to the Kingdom of Hanover (with the exception of the monasteries occurring in it, which fell to the monastery chamber of Hanover ) , which in turn was annexed by Prussia in 1866. The area of ​​the old monastery has belonged to Lower Saxony since 1946 .

Coat of arms of the Principality of Hildesheim

Blazon : The coat of arms of the Principality of Hildesheim is split in red and gold. On the crowned helmet with red and gold helmet covers a pointed hat split from red and gold , on top two ostrich feathers in red and gold with a gold button. The hat of the same color is covered with two flags on golden steel-tipped spikes, from which the right gold-red, the left red-gold split.

The diocese of Hildesheim had the coat of arms on seals since Bishop Heinrich (1310-1318) . But here was gold in front and red in the back. The cap was split in red and gold.

The coat of arms still appears as a basic motif in some of the current municipal coats of arms: