The principality of Grubenhagen was a sub-principality of the Duchy of Braunschweig-Lüneburg that was created in 1291 on the territory of what is now the German state of Lower Saxony. The ruling dynasty was the Guelph family .

The rulership, which was divided into two separate parts, lay on the one hand between the northwestern edge of the Solling and the Leine near Salzderhelden and on the other in the southern Upper Harz and the southwestern Harz foreland north of the Eichsfeld , with the Lower Eichsfeld at times also being part of it . It included Einbeck with the Sankt Alexandri monastery , the Heldenburg , the Grubenhagen Castle , Osterode am Harz , Clausthal , Duderstadt (1366 to Mainz) and Herzberg am Harz with the Herzberg Castle .

After an inheritance division between the sons of Albrecht I , Duke of Braunschweig-Lüneburg, in 1291 Heinrich the Wonderful received the newly founded principality of Grubenhagen. The principality of Grubenhagen is named after the castle of the same name, the ruins of which are located near Rotenkirchen south of Einbeck . The name Grubenhagen was only created around 1617, the previous name of the principality is unknown. The Grubenhagen Castle that gave the Principality of the name was not a residence. It did not appear as the “house” of the dukes until the early 15th century. Rather, one resided in the Heldenburg . The Grubenhagener Welfen initially only called themselves "Duke of Braunschweig" because of inheritance disputes. The addition "and Lüneburg" as part of the name of the other Guelph lines was only assigned to this line in the 16th century.

Heinrich's descendants, he had eight sons and eight daughters, all had to be looked after appropriately. Heinrich's eldest son, Heinrich of Greece , no longer held undivided rule, which caused him, who also had at least eleven descendants, to have major problems with their proper care. Like many other homeless aristocratic sons of that time, she was drawn to the distance. His son Otto , known as "the Tarentine", successfully hired himself as a condottiere in Italy and eventually became Prince of Taranto .

In total, the Grubenhagen line of the Guelphs had 68 members between 1291 and 1596 in over eight generations. Six of the total of 40 male descendants of Heinrich the Whimsical died early, twelve became clergy, six more went abroad or hired themselves out for foreign masters. The remaining sixteen shared - partly subsequently, partly simultaneously - the rule of the principality of Grubenhagen. They branched out into several lines and the already small Grubenhagener territory was continually divided into smaller and smaller principalities (Osterode, Herzberg, Salzderhelden, Einbeck). As a result, the Grubenhagen princes visibly lost their importance and fell behind their Guelph cousins ​​in Wolfenbüttel and Lüneburg .

With the death of Philip II , the youngest son of Philip I , in 1596, the Grubenhagen line died out. The Principality of Grubenhagen was then occupied by Duke Heinrich Julius from Wolfenbüttel . The Lüneburg line of the Welfs protested against the annexation to Wolfenbüttel and in 1617 won the right at the Imperial Court of Justice. Heinrich Julius' son, Duke Friedrich Ulrich , had to transfer the Grubenhagen inheritance to Christian the Elder , Prince of Lüneburg .

Family tree of the ruling dukes of the principality of Grubenhagen 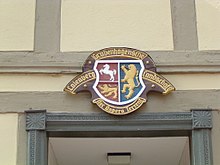 The Calenberg-Grubenhagensche landscape with its administrative headquarters in the House of the Stock Exchange in Hanover still exists today . The coat of arms can be found on a building in downtown Göttingen opposite the St. Johannis Church.