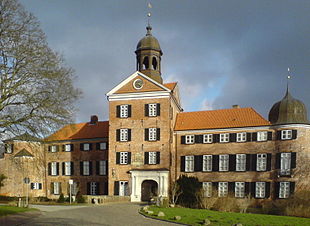 The Eutin Castle , Prince-Bishop's residence since 1350

The Lübeck bishopric (also known as the Fürstbistum Lübeck) was an imperial estate of the Holy Roman Empire in what is now Schleswig-Holstein . It was the secular property of the bishop of Lübeck and the cathedral chapter . From 1500 it was part of the Lower Saxony Empire .

The area of ​​the Lübeck bishopric comprised the properties of the bishop , the cathedral chapter and the Eutin collegiate monastery . These were mainly around the city of Eutin , the bishop's residence and on the lower reaches of the Trave around Bad Schwartau . In the city of Lübeck itself, only the choir room of the Lübeck Cathedral and a few properties around the cathedral on which the canon curia were located belonged to it.

In the late Middle Ages (finally around 1350) the bishops, whose influence in the trading city of Lübeck remained small, moved their residence to the castle there in Eutin .

While the spiritual oversight district of the Roman Catholic Church much larger diocese Luebeck in the Reformation went down, which remained high pin as authority obtained because the cathedral chapter in 1586 undertook, as Prince Bishops / administrators Members of the House of Schleswig-Holstein-Gottorf to choose. Through skillful negotiations by his representatives David Gloxin and Christian Cassius , Prince-Bishop Johann X. von Schleswig-Holstein-Gottorf succeeded in securing this construction in the Peace of Westphalia of 1648. As a result, the Hochstift / Fürstbistum Lübeck became the only Protestant ecclesiastical imperial estate . In the bishopric of Osnabrück , rulership changed between Catholic and Lutheran bishops , and the archbishopric of Magdeburg was secularized in 1680.

These (at least temporarily Protestant) ecclesiastical principalities were accordingly not placed on the (Roman Catholic) ecclesiastical bench at the Reichstag in Regensburg , but at a right angle from the emperor in the front right (the Lübeck representative sat alone when Osnabrück was Catholic) . One of the special features was that four of the canon posts were still occupied by the Pope .

The binding of the Bishopric to the House of Holstein-Gottorp led to ongoing disagreements with the Danish royal family . At times there were competing coadjutors . After the death of Prince-Bishop August Friedrich von Schleswig-Holstein-Gottorf , a military dispute about his successor broke out, which culminated in the siege and occupation of Eutin Castle by the Danes at Christmas 1705 . The Danish general Hartwig von Passow was fatally wounded. Finally, the coadjutor of the Danish party, Prince Karl of Denmark, was brought to give up his claim through diplomatic intervention by the English Queen Anne and the States General and after a pension had been guaranteed, so that the coadjutor of the Gottorf party, Christian August von Schleswig-Holstein-Gottorf the successor could take over. 1707 was under pressure from the Swedish King Karl XII. in Article II of the Altranstädter Convention the bishop's election mode and thus the Gottorf rule also recognized under imperial law.

Catherine II of Russia , who held the guardianship of Grand Duke Paul Petrowitsch , the Hereditary Duke of Holstein-Gottorp, exchanged the Holstein-Gottorp hereditary lands for the Danish counties of Oldenburg and Delmenhorst in May 1773 after negotiations in 1767 ; Grand Duke Paul ceded this to the Prince-Bishop of Lübeck, Friedrich August , the leading member of Holstein-Gottorp's younger line that remained in Holstein, through the Treaty of Tsarskoe Selo at the end of 1773 . As a result of this process, Russia renounced all claims to the Duchy of Schleswig, which now came fully into Danish possession. Furthermore, the Duchy of Lübeck was effectively united with Oldenburg, which was elevated to a duchy by imperial decree at the end of 1774.

In the Reichsdeputationshauptschluss 1803, the bishopric was finally converted into a hereditary secular principality and awarded as the Principality of Lübeck to the Dukes of Oldenburg .

The canonicals existing at the time of secularization and the privileges and income associated with them remained in place until the end of their owners' lives. The last cathedral dean , Friedrich Ludwig von Moltke , lived until 1824, and the last canon did not die until 1871. It was Karl Freiherr von Stenglin (born August 12, 1791 in Kiel; † March 15, 1871 in Geneva), who was already a child Had become canon. He was married to Karoline Countess Hessenstein (1804-1891), the youngest daughter of Elector Wilhelm I of Hessen-Kassel and Karoline von Schlotheim .

In 1804, the Duke of Oldenburg Peter Friedrich Ludwig agreed in a settlement with the Hanseatic City of Lübeck on a distribution of the monastery properties in the city and the lands of the cathedral chapter, so that there was a reciprocal delimitation of the area, especially for the Lübeck exclaves .