Archbishopric and Duchy of Bremen

The Archbishopric of Bremen , Duchy of Bremen since the Peace of Westphalia in 1648 , was a state structure in what is now northern Lower Saxony and Bremen . 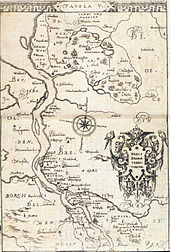 From the 11th century onwards, the archbishops of Bremen succeeded in creating a territory, called the archbishopric , which comprised around a third of the Bremen diocese and around 10% of the neighboring diocese of Verden (3rd mile of the Old Country and Buxtehude and its hinterland).

Until 1180 the diocese belonged to the tribal duchy of Saxony . 1180, after the overthrow of Duke Heinrich the Lion , the duchy was divided up by the Gelnhausen deed of Emperor Friedrich I. Since then, the diocese of Bremen existed as imperial territory. Archbishop was the Ascan Siegfried I. von Anhalt in 1180 . Since 1500 the Archbishopric of Bremen belonged to the Lower Saxon Empire within the Holy Roman Empire .

The estates (cathedral chapter, knighthood , prelates as representatives of the clergy, cities) met from 1398 to 1648 in the state parliament of the archbishopric of Bremen mostly in Basdahl .

Even before Bremen officially became a Free Imperial City in 1646 , the archbishops were increasingly staying outside the city. Bücken initially acted as residence , then Vörde (today Bremervörde ). Within the city of Bremen, only the cathedral freedom remained under archbishop's sovereignty. Due to the increasing economic difficulties of the archbishops, the monastery estates strengthened , so that from 1540 the territory was under estate administration. During these years, the Reformation gained a foothold, which was reinforced by the influence of the Protestant-dominated Bremen cathedral chapter . Archbishop Georg von Braunschweig-Wolfenbüttel tolerated this development. Since 1567, the Bremen cathedral chapter elected Lutherans as bishops, although the Pope refused to recognize them. The archbishopric became Lutheran and remained so when the imperial city of Bremen converted from Lutheranism to Calvinism at the end of the 16th century .

The Archbishopric was secularized by the Peace of Westphalia . The newly created Duchy of Bremen, together with the also secularized Duchy of Verden, came to Sweden as the territory of Bremen-Verden with its administrative headquarters in Stade .

In the Swedish-Brandenburg War from 1675 to 1676, the Swedish Duchy of Bremen was conquered in a campaign by several states of the Holy Roman Empire and Denmark and remained in Allied ownership until the end of the war in 1679. In the course of the Peace of Saint-Germain in 1679, the duchy returned to Sweden.

In 1712 it came to Denmark and in 1715 it was sold to the Electorate of Braunschweig-Lüneburg . From then on, the Duchy of Bremen shared the history of the state and the later Prussian province of Hanover and became part of Lower Saxony in 1946 , where it initially formed the administrative district of Stade together with the former Duchy of Verden and the Land of Hadeln . Cultural-political tasks in the area of ​​the former duchies of Bremen and Verden are now performed by the Stade Regional Association.