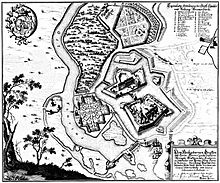 The castle in 1653 on an engraving by Merian . Above the castle island, you can see the outwork with the preserved L-shaped office building in the middle

The fortified Bremervörde Castle in Bremervörde in northern Lower Saxony was the largest castle complex in the region. After various armed conflicts, it was razed in 1682 and mostly removed. The existing office building now contains a museum.

From the castle to the chateau

The first castle complex on the site of the later castle was built at the behest of Lothar III. at the beginning of the 12th century, built between 1112 and 1122. Due to a ford across the Oste and its location on the historic Ochsenweg , the site was of strategic importance.

The castle, called Castrum Voerde , fell to various owners after disputes, for example from the Stade Counts to Heinrich the Lion and finally in 1219 to the Archdiocese of Bremen . Located roughly in the center of the diocese, the castle developed over the course of the next few centuries into the largest fortress in the region and the seat of the central administration of the episcopal lands and the bailiffs . The complex was a residence for several of the Bremen bishops and was gradually expanded and expanded from a castle to a palace. From the 16th century onwards, most of the building material came from the brickworks in neighboring Bevern .

At the beginning of the Thirty Years War , the castle complex consisted of a fortified island surrounded by the river Oste, which supported the magnificent multi-winged Renaissance castle . The castle island opposite in with was bastions secured Vorwerk and south and east of the castle area more representative of pleasure and vegetable gardens were created.

In the course of the war, the city and the castle were besieged and badly damaged in 1627 and 1646, the castle experienced another siege during the Danish-Swedish wars in 1657. During the Swedish rule , the new masters moved their seat of government to Stade and the newly built country castle Agathenburg . The formerly large castle complex in Bremervörde lost its importance. In 1682, most of the fortress was razed and the ruins of the castle and defenses torn down . The released building material was partly used to build the Swedish warehouse in Stade .

Aerial view with the office building and the fortress' earlier moats

From the air, the basic structure of the fortress area, especially the Vorwerk, can still be seen in parts. The castle islands in the Oste, the former ramparts and moats have been recaptured by nature over the past three centuries and now look like a natural landscape.

There are no visible remains of the castle itself. The so-called chancellery building - today the oldest building in the city - and a former stable still stand from the former Vorwerk . Both buildings served as a district house and district archive. Today they added the Bachmann Museum . Opposite the chancellery is the new district building, a building from the 1960s, which is roughly the same as the former castle.

The Bachmann Museum is located in the former archiepiscopal chancellery building. The museum houses various exhibits on the archeology, geology and history of the region, including the bog corpse from Bremervörde Gnattenbergswiesen . Various exhibitions and readings or lectures are also held here.

In the European Year of Cultural Heritage 2018, the Bachmann Museum was a project funded by the State of Lower Saxony that showed the special exhibition A house makes history for the office building.