Map of the ox path in the area of ​​the Danewerk

The Ochsenweg , also Heerweg ( Danish Hærvejen , Sakservejen or Adelvejen ; Low German Ossenpadd ), is a historic land route on the Cimbrian Peninsula from Viborg in Denmark to Wedel in Schleswig-Holstein . From the 16th to the 18th century, the ox drift , an important cattle drive , ran along its routes .

The route called Heerweg in Denmark leads from Viborg via Silkeborg , Vejle , Vejen and Aabenraa to Padborg . Further south there are many larger cities in Schleswig-Holstein along the way, such as Flensburg , Schleswig , where the Viking settlements Haithabu and Rendsburg were previously located . In Rendsburg the Ochsenweg divides into an east route via Neumünster and Bad Bramstedt and a west route via Itzehoe and Elmshorn . The two routes meet again in Uetersen to lead to the Ochsenweg's destination, the Ochsenmarkt in Wedel .

However, because of the competition from the port cities and Elbe crossings, the route branched out over the last few kilometers. In the past, the most important Elbe crossing was a ferry connection from the Hetlinger Schanze over the island of Lühesand to the southern bank of the Elbe. In the Middle Ages, Hamburg became the most important city on the Lower Elbe . At the entrance of the Ochsenweg in Hamburg area was the ox toll . Since the Danish rulers of Schleswig-Holstein preferred to direct trade to their own ports, the Ochsenweg also had branches to Glückstadt and Altona .

The routing near Flensburg and Schleswig / Haithabu is striking: the main route led westwards on the Geestrücken past the city, and the former route is now a bypass route in Flensburg. In addition, there were branches from the north-west and south-west into the port cities on the fjords . Other overland roads such as the Angelbowege went from the Ochsenweg .

Along the historic Ochsenweg, two wooden horns were placed at prominent traffic junctions to remind visitors of the route. 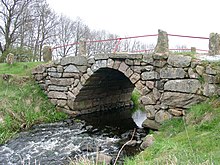 The origins of the ox trail are likely to be in the Bronze Age . The route ran mainly on the dry part of the two important natural landscapes of the Cimbrian Peninsula , the Geest of the Baltic Ridge in the east and on the Geestrand as access to the marshland in the west. It followed the watershed for long stretches . The Treene , flowing west from the fishing peninsula, was easy to cross in its upper reaches. The Eiderniederung represented a significant natural obstacle , as the Eider is quite wide further east and the Ochsenweg had to cross its lower course. In Denmark, parts of the route still follow the original route , for example at Oksekær , and there are small bridges there, such as the granite ashlar bridge Gejlå Bro from 1818.

The common German name of the Ochsenweg comes from the Ochsendrift, which ran along this path. Until the 19th century, cattle from Jutland and the Danish islands were driven to the fattening areas in the North Sea marshes on the west coast of Schleswig-Holstein, East and West Frisia. There they were fat-grazed until they were sold as cattle for slaughter.

Oxen were important as draft animals on what used to be the soft ground . Despite its Danish name, Heerweg , it was seldom a marching route for armies, as there were only a few invasions from Jutland or Schleswig to the south from ancient times until the 19th century and only three from Germany to the north. In the Middle Ages it was also used as part of the Camino de Santiago from Denmark to northern Spain.

The end as a route for the cattle drive resulted from the construction of the railway up to the end of the 19th century, as railways took over this task on the routes largely following the Ochsenweg routes: in the east the Altona-Kieler , Neumünster-Rendsburgsche and Rendsburg-Oster-Ohrstedt– Flensburg – Fredericia route, in the west the march railway .

In the Middle Ages and early modern times, the ox path was also an important pilgrimage route that led people from Northern Europe to Italy in particular. Erhard Etzlaub added it to his famous Romwege map around 1500 .

The ox trail was used as a symbol of unifying people between Germans and Danes at the end of the 20th century and is now used for traditional marches and events related to it.

Danish signage of the ox trail as a hiking trail

The Ochsenweg long-distance cycle path has existed since 1998 with two variants between the Danish border near Flensburg and Wedel near Hamburg. Since some sections of the historical route are now impassable, while others have become the main road, the historical and tourist routes are not identical everywhere. The very flat and therefore easily navigable cycle path on the Geestrücke Schleswig-Holstein continues north of Denmark as Hærvejsruten ( Heerwegroute , national cycle path no. 3). The cycle path is part of D-Route 7 , which in turn is part of EuroVelo-Route 3 .

The Via Jutlandica - the Jutland path of the Jakobsweg - essentially follows the ox path .