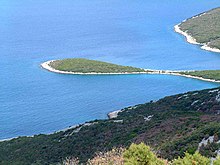 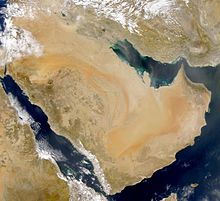 The Arabian Peninsula is a peninsula despite their size.

A peninsula is a land mass lying in a body of water , which protrudes above the water level even at high tide , which is predominantly, but not completely, surrounded by water, but still has a natural connection to the mainland .

Peninsulas can have an area of ​​up to several million square kilometers , such as Italy or the Iberian Peninsula , but they can also be so small that their width and length (which usually exceeds the width) are only a few hundred meters.

One form of the peninsula is the headland and the particularly narrow spit that has been washed up . If a peninsula is located in inland water (lake, river), it is also referred to as an "inland peninsula".

Delimitation between islands and peninsulas