This article explains the Kamchatka Peninsula, for other meanings see Kamchatka (disambiguation) .

Kamchatka ( Russian Камчатка ) is a peninsula in Northeast Asia . It belongs to the Kamchatka Region in the Far East Federal District of the Russian Federation .

Since 1987/88 the peninsula has given its name to the mineral kamchatkite, which was first discovered there . In 1996, the volcanic region of Kamchatka, which is largely designated as a nature park , was declared a World Heritage Site by UNESCO .

With about 370,000 km², about 5% larger than Germany, Kamchatka is the largest peninsula in East Asia and is located between the Bering Sea and the North Pacific in the east and the Sea of ​​Okhotsk in the west. It extends from eastern Siberia to the south; its continuation towards Japan is the Kuril Islands . The most important city of Kamchatka, Petropavlovsk-Kamchatsky , is located on Avacha Bay , which is one of the largest natural harbors in the world.

The peninsula is 1200 km long and up to 450 km wide. The geographical latitude is 51 ° to 62 ° N, the longitude 160 ° E. There are about 29 active volcanoes (of more than 160 in total) and many geysers on Kamchatka . Every year, an average of six of the volcanoes erupt. Ash clouds affect air traffic and can also lead to ash showers up to 45 km away.

The highest point is the volcano Klyuchevskaya Sopka with 4750  m . It lies outside the Sredinny ridge , the main mountain range that runs through the peninsula from north to south. Other well-known volcanoes are Tolbachik , Kambalny , Avachinskaya Sopka , Schiwelutsch , Besymjanny , Ichinskaya Sopka and Mashkovtsev .

The largest river is the 758 km long Kamchatka . It has its source on the Sredinny ridge, flows east of it a little to the north and then to the east between the volcanoes Klyuchevskaya Sopka and Schiwelutsch into the Pacific .

Geographically, the west of the country is older than the east. To the west there are rocks from the Oligocene (33–23 million years). Kamchatka lies on the so-called Okhotsk Block, a piece of plate above the subduction zone, where the Pacific plate pushes under the edge of the western part of the North American plate from the east at a speed of eight centimeters per year . The oldest volcanic ridge (Sredinny) was created as early as the Oligocene. Five to seven million years ago, two volcanic arches met here, and ever since then new volcanoes have emerged in the east.

In addition to volcanic activity and subduction, there are also frequent earthquakes . The most devastating so far, with a magnitude of 9.0, occurred on November 4, 1952 off the southeast coast. The small town of Severo-Kurilsk on the neighboring Kuril island of Paramushir was completely destroyed by the tsunami that followed .

The peninsula was one of the first focal points for fishing for king crab , also known as the "Kamchatka crab ".

Today around 310,000 people live on Kamchatka. The peninsula is sparsely populated. About 65% of the population live in the largest city, Petropavlovsk-Kamchatsky , which is the capital of the Kamchatka region and the economic center of the peninsula.

Most of the population is made up of Russians . Only about 2.5 percent come from the original inhabitants (Kamschadals) who originally lived here and belong to the ethnic groups of the Korjak , Itelmen and Ewenen . 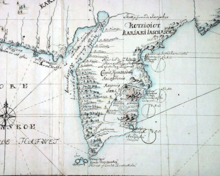 Map of the Kamchatka expedition

The Kamchatka Peninsula was discovered by Cossacks on their forays into eastern Russia in 1697. Since there were a lot of sables here, the area was annexed by Russia shortly afterwards . The indigenous people living there, the Koryaks , Itelmens , Evens , Chukchi and Aleuts (Unangan), were bloodily subjugated by Russian Cossacks and almost exterminated.

The Dane Vitus Bering , after whom the strait between eastern Siberia and Alaska is named, led large expeditions to Kamchatka and north to the Bering Sea from 1725 to 1730 and 1733 to 1743 . Georg Wilhelm Steller , botanist and theologian, wrote extensive records of the second expedition. The agronomist Johann Karl Ehrenfried Kegel researched soil conditions and geology from 1841 to 1847.

The Kamchatka Peninsula has only been accessible to tourists since 1990. It was a restricted military area for over 50 years. Soviet citizens needed a special permit if they wanted to travel to or live in Kamchatka. In 1983, during a tense phase of the Cold War , a Korean Air Lines airliner , which was flying through closed Soviet airspace over Kamchatka, was shot down by an interceptor because the Soviet military believed the machine was a camouflaged US spy plane. All 269 inmates were killed.

At the beginning of October 2020, conservationists and local authorities reported hundreds of seals, octopus and sea urchins washed ashore on Chalatyr Beach, which is popular with tourists and surfers, and in Avacha Bay . Greenpeace spoke of the amounts of crude oil and phenol in seawater that were repeatedly above normal .

Valley of the Geysers

A main attraction on Kamchatka is the Valley of the Geysers with around 90 geysers. Hot water fountains reach heights of up to 40 meters, their steam clouds sometimes more than 200 meters. The valley was declared a World Heritage Site Volcanoes of Kamchatka by UNESCO in 1996, along with other areas of the peninsula . Another part of the World Heritage area is the Bystrinsky Nature Park with the Ichinskaya Sopka in the central part of Kamchatka.

In June 2007, parts of the Valley of the Geysers were destroyed in a landslide and then closed to visitors.

There are about 29 active volcanoes on Kamchatka, it has the highest density of active volcanoes in the world. Kamchatka is therefore also known as the “land of volcanoes”. The subsoil at the Mutnowski volcano feeds thermal springs that create up to 500 m long snow tunnels. They provide heat for a small geothermal power plant.