The Kuril Islands ( Russian : острова Курильские; Japanese : 千島列島 , Chishima-retto , German " archipelago of thousands of islands") or Kuril retto ( クリル列島 , Kuriru-retto , dt "Kuril archipelago.") Are an approximately 1,200 km long chain of islands belonging to Russia and partly controversial with more than 30 large and small islands of volcanic origin in East Asia . Like a bridge, they connect the Russian peninsula of Kamchatka with the Japanese island of Hokkaidō. The chain of islands separates the Sea of Okhotsk from the rest of the Pacific .

Many active volcanoes , very frequent earthquakes, snowstorms and fog in the subarctic climate make the islands, which are located in fish-rich waters, very inhospitable. The nature on the islands is relatively untouched. The Kuril Islands are administratively to the Rajons Severo-Kurilsk , Kurilsk and Yuzhno-Kurilsk the Sakhalin Oblast . The total number of inhabitants is 18,730 (2009 calculation).

When the Dutch captain Maarten Gerritszoon de Vries was the first Western European to reach the Kuril Islands in 1643 , around 3000 to 3500 Ainu lived from fishing, hunting and trading up to the Aleutian islands and Kamchatka. In 1697, a Russian expedition led by Vladimir Atlasov from Kamchatka discovered the northern Kuril Islands, which were only explored more thoroughly in 1711. In 1721 the Russians reached the island of Kunashir . In 1739 an expedition led by Martin Spangberg led the Russians across the Kuriles and Hokkaidō to the Japanese main island of Honshū .

In 1761, the governor of Siberia PA Soymonov gave the order to make the Ainu of the Kuriles, including Hokkaidō , which the Russians still regarded as one of the Kuril Islands at that time, tributary to Russia. If the northern Kuril Islands were already under Russian administration at that time, the Russians expanded their control over Iturup and Kunashir in 1766 . In order to counter Japan's claims to these two islands, which were already expressed at the time, the Russians erected stakes there in 1768 with the inscription "Kuril Islands". 1785–86 the Japanese succeeded in ousting the Russians from Iturup and Kunashir. The Russians who entered again afterwards were chased away by the Japanese in 1799. In 1801 the Japanese finally occupied Urup , where the Russian settlement Alexandra was located from 1795 to 1807 .

In 1855 the Shimoda Treaty (the first ever treaty between Russia and Japan ) stipulated that the border between the two states was between the islands of Iturup and Urup . Sakhalin Island (Japanese Karafuto ) has been designated as an area of mutual interest . This meant that nationals of both states could settle there, which in the following years led to conflicts between Russian and Japanese settlers.

In 1875 the Treaty of Saint Petersburg was concluded, on May 7th (Julian calendar: April 25th) the Japanese plenipotentiary Enomoto Takeaki and the Russian statesman Prince Alexander Gorchakov signed the following regulation: the Kuril Islands, still Russian since 1855 (in § 2 of the Treaty referred to as the 18 islands between Urup and Shumshu ) north of Etorofu were awarded to Japan; in return, Sakhalin was completely ceded to Russia. With that the entire Kuril archipelago fell under Japanese sovereignty . In 1945 a total of about 17,300 Japanese lived on the southern Kuril Islands of Etorofu (Russian Iturup) and Kunashiri (Russian Kunashir), which were conquered by the Soviet Union after 1945, and the Shikotan and Habomai Islands belonging to the Hokkaidō prefecture . In 1946 they had to leave the islands. To this day there are demands to return these southern islands to Japan . With the treaties of 1855 and 1875, respectively, Japan argues that only these 18 islands constitute the Kurils (or northern Chishima) under constitutional law , while the two large southern islands do not belong to the Kurils . Shikotan and the Habomai Islands were not part of the Kuril Islands anyway.

Cormorants on Shumshu Island . The island of Paramushir can be seen in the background

All Kuril Islands are now part of Russia . The Soviet Union occupied the entire arch of the island in August / September 1945 at the end of the Second World War , see Pacific War . Since then, Japan has been demanding the return of the southern Kurils, which consist of two large islands off the northeast coast of Hokkaidō, as well as the Habomai archipelago and the island of Shikotan, which, according to the Japanese position, do not belong to the Kurils but to Hokkaidō and, in September 1945, also from the USSR had been occupied. In summary, these four areas are called Northern Territories in Japan .

On the islands of Paramushiru (Russian: Paramushir ) and Shumschu at the northern end of the archipelago shortly before Kamchatka , units of the 7th Division of the Japanese Army were only stationed in October 1940 . With the Kashiwabara and Kurabuzaki air force bases (the latter right next to the Chikurachki volcano, the facilities are still well preserved and a destination for many tourists today) in the south of the island and the Kataoka air force base and the Kataoka naval port on the neighboring island of Shumshu, these fortress islands had seven runways alone and several ports. Then there was the Miyoshino bomber base on Shumshu. From there, the Japanese fought long-distance duels with the US Army Air Force units stationed in the Aleutian Islands and Alaska . In the summer of 1945 there were around 22,000 Japanese troops and 70 tanks on these two northernmost islands, as the large-scale relocations of troops by the Soviet Union to the borders of Manchuria and the troop concentrations in the ports in the Maritime Province or Kamchatka / North Sakhalin had not escaped the Japanese .

Originally, the Kuril Islands were to be conquered before Japan surrendered , as it was not clear until August 23, 1945 whether the Kuril Islands and half of Hokkaidō would become the Soviet occupation zone of Japan. Stalin intended to occupy Hokkaidō shortly before the gate closed.

The conquest of the Kuril Islands by the Soviet Union took place with considerable casualties due to the confusing objectives of the operation and the associated time pressure. On August 18, 1945, at 4:30 a.m., the Soviet marine infantry crossed the narrow waterway from Kamchatka to Shumshu Island , on which the Japanese 91st Division stood. The Soviet marines used 16 American LCI (L) - Landing Craft, Infantry (Large) for the landing, each bringing about 180 men 10 knots to the landing target. From June 10th to July 29th, a total of 30 LCI (L) were handed over by the US Navy to the Soviet Navy via the Alaska base Cold Bay . The Hula project was one of the best-kept secrets of Soviet-American collaboration in the war against Japan. Even so, the capture of Shumshu claimed the lives of 1,567 Soviet and 1,018 Japanese soldiers by August 21, just days before the end of World War II .

The Tokyo Army Headquarters allowed the commanding general of the 5th Regional Army to start negotiations on surrender, which took place for the garrisons on Shumshu , Paramushir and Onekotan on the evening of August 19. 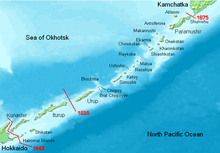 Until September 5, 1945, the remaining Kuril Islands were occupied by Soviet troops without a fight: Iturup on August 29, Kunashir , Schikotan and the Habomai archipelago, which has belonged to Japan since the 16th century (Russian: Chabomai ) on September 1. On September 20, the two large islands were renamed Iturup and Kunashir and annexed. The Japanese population of approximately 17,300 people was displaced by the spring of 1946. Some Japanese postal workers were kept until 1947 to keep the Japanese postal and telecommunications facilities running. Many male civilians and all soldiers were sent to Siberian camps, the majority of which did not survive. On February 2, 1946, the islands were declared under Soviet territory by the Presidium of the Supreme Soviet of the USSR .

In 1951, the San Francisco Peace Treaty between Japan and the Allies (which the USSR did not adhere to) stated in Article 2 (c) that Japan renounced all rights, titles and claims in relation to the Kuril Islands and the southern part of Sakhalin and neighboring islands ceded to Japan in the 1905 Treaty of Portsmouth as a result of the Russo-Japanese War . No exact geographical borders of the Kuril Islands were defined, but the participants in the peace conference understood and accepted Japan's position that the four islands under discussion should not be counted among the Kuril Islands. The US reiterated this in a Note to the USSR dated May 23, 1957, which stated that the word Kuril Islands in the Treaty of San Francisco and in the Yalta Agreement did not include or include the Habomai Islands, Shikotan, Kunashiri and Etorofu Inclusion was intended.

The Kuril conflict has remained unsolved to this day, and Japan has so far unsuccessfully asked Russia to return the islands south of and including Etorofu (Russian Iturup ).

In Japan, February 7th is celebrated annually as Northern Territories Day. On this day (February 7, 1855, Japanese lunar calendar date: Ansei 1/12/21), the Shimoda Treaty between Russia and Japan was signed, which established the border between the islands of Iturup (Etorofu) and Urup .

During the Cold War , the Kuril Islands were of great strategic importance. They formed a line of defense against the Soviet mainland. In addition to a Division ground forces (established from 1978 to 1995 reduced) was added about 40 MiG-23 B - fighter-bombers stationed to Tokyo could fly. In the 1980s in particular, this Soviet military facility was considered a threat to Hokkaidō.

The two largest islands in the southernmost part of the island chain are claimed by Japan. These are: Etorofu (Russian: Iturup; 3139 km²) and Kunashiri (Russian: Kunashir; 1500 km²). Together they take up about half the area of ​​all Kuril Islands.

In addition, Japan demands the return of the island of Shikotan (255 km²) and the Habomai group off Nemuro (102 km²). One of the Habomai Islands, Kaigara , is only four kilometers from the Japanese island of Hokkaidō. The Habomai Islands and Shikotan belong (ed) to the province of Nemuro and today for Nemuro Subprefecture the prefecture Hokkaido , not one of the Kuril Islands. The Red Army also occupied these islands in 1945.

The population is distributed very unevenly across the islands. There are permanent residents only on four islands: on Paramushir, Iturup, Kunashir and Shikotan. At the beginning of 2010 there were 19 inhabited places: two cities ( Severo-Kurilsk ), one urban village ( Yuzhno-Kurilsk ) and 16 villages.

The highest population was registered in 1989 with 29,500 inhabitants. During the Soviet period , the population was much higher due to special benefits and the high number of soldiers. There were military bases on now uninhabited islands such as Shumshu, Onekotan, Simushir and others. 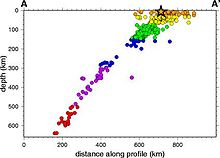 A profile through the Kuril Trench is the Wadati-Benioff zone of the trench , in which earthquake epicentres occur at great depths, which lie along the tectonic plate, which is subducted here at an angle of around 45 °. The star above marks the epicenter of the November 15, 2006 earthquake

The Kuril Islands form an arch of islands that was created by the effects of the plate displacement. They are part of the Pacific ring of fire , on which tectonic plates are pushed together along various subduction zones . Here the Pacific plate is subducted under the Okhotsk plate at an angle of around 45 °.

The Kuril Trench in front of the chain of islands is a deep sea trench that marks this subduction zone. In the Kuril Rift lies Vitja Deep 3 , at 10,542 m below sea level, one of the deepest places on the earth's surface.

Characteristic for these tectonic processes are the volcanic activities and frequent earthquakes, the hypocenters of which can lie at great depths. An earthquake measuring 8.3 struck the Kuril Islands on November 15, 2006.

Of the 68 volcanoes in the Kuril Islands, 36 are classified as active. Another 98 submarine volcanoes are known in the area of ​​the island's arc . When volcanic eruptions on the Kuril Islands, ash clouds can form, which endanger air traffic. Frequent bad weather and the remoteness of the islands make volcano monitoring difficult, so remote sensing with satellites is of great importance.

List of the islands belonging to the Kuril Islands

On February 11, 2017, 5 uninhabited islands were named by the Russian Prime Minister, one after General Kuzma Derevyanko and one after Foreign Minister Andrei Gromyko .