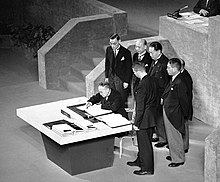 The peace treaty of San Francisco ( English Treaty of Peace with Japan , Japanese 日本国 と の 平和 条約, Nihon-koku to no heiwa jōyaku , literally: "Peace treaty with the state of Japan") of September 8, 1951 was the final point of the 1 September 1951 in San Francisco opened peace conference . He returned full sovereignty to Japan on the main Japanese islands and other islands , thereby officially ending the occupation (1945–1952). It was signed on September 8, 1951 and came into force on April 28, 1952.

The Treaty of San Francisco ended the Second World War in the Pacific region ( Pacific War ) diplomatically, and Japan gave up its role as the imperial supremacy in South-East Asia. The treaty relies on many points on the United Nations Charter and the Universal Declaration of Human Rights to underline the goals of the Allies and to place the fate of Japan in the hands of the international community. The aim of the agreement was also to prepare for Japan's admission to the UN , which was still considered an enemy state when it was founded six years earlier (see UN enemy states clause ).

In the treaty, Japan renounces its rights under the Boxer Protocol (see Boxer Rebellion ) of 1901 and continues to waive its claims to Korea , Taiwan , the Pescadores Islands , the Kuril Islands , Sakhalin , the Spratly Islands and territories in Antarctica . The documents do not formally state which nations should acquire sovereignty over these areas. In particular, Taiwan's legal status has not yet been clarified. Some proponents of Taiwanese independence derive from this a right to self-determination under Article 77b of the Charter of the United Nations. The majority of the conference participants also expressed the opinion that the self-determination of the islanders should be taken into account.

Article 3 of the agreement places all Nansei Islands south of the 29th parallel (i.e. the Amami , Ryūkyū (including the Senkaku Islands ) and Daitō Islands ), as well as the Ogasawara Islands (here referred to as the Nampō Islands ) under US - American trust. The Amami Islands were returned to Japan on December 25, 1953, the Ogasawara Islands on April 5, 1968 and, after a referendum in 1971, the Daitō and Ryūkyū Islands on May 15, 1972.

The document also set guidelines for the repatriation of prisoners of war and declares the renunciation of further military aggression according to the guidelines of the UN Charter. Previous treaties (especially with the Axis powers Italy and Germany) are annulled and the framework for binding Japan to the Western defense alliance is laid.

Ambiguities in the question of exactly which islands Japan gave up its claims to led to the Kuril conflict, which has not yet been resolved .