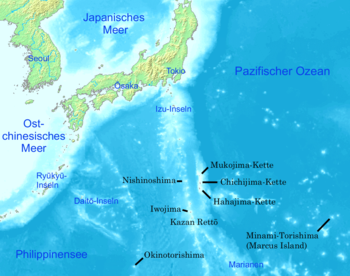 The term Ogasawara Islands ( Japanese 小 笠原 諸島 Ogasawara-shotō ) is a collective name for all islands and island groups belonging to the municipality ( village , mura ) Ogasawara , the most important and only inhabited being the Bonin Islands ( Ogasawara-guntō ), about 1000 kilometers southeast of the Japanese Main island, Honshu , are. Together with the Izu Islands , they are referred to as the "Southern Islands" ( Nampō-shotō ).

The Ogasawara Islands include two chain of islands and three isolated islands:

Geologically, the islands, with the exception of the last two remote ones, belong to the Izu-Bonin-Mariana Islands arch .

Chichi-jima and Haha-jima of the Ogasawara-guntō are the only inhabited islands. Until the Second World War , Muko-jima (Ogasawara-guntō) was also inhabited, as was Kita-Iwojima and Iwojima (both Kazan-rettō). Around 400 soldiers are permanently stationed on Iwojima, but no civilian population. Sugar cane , pineapples , bananas and, on a trial basis, coffee are grown on the islands . There are also precious woods; in particular, cedar, beech, boxwood, rose and sandalwood are exported.

Today the islands are among the most isolated parts of Japan, as they can only be reached by a 24-hour boat trip. The liners leave Tokyo twice a week . The Japanese construction industry and politicians have long been calling for an airport to be built, but the local population is skeptical about it.

On June 24, 2011, the islands were declared a World Heritage Site by UNESCO .