United States Army Air Forces ( USAAF ) was the official name of the US Army's air force from 1941 to 1947 . The USAAF was the direct predecessor of the US Air Force .

The US Air Force was founded in August 1907 and was only organized as a separate armed force 40 years later . In the meantime, they have been named as follows:

With the introduction of heavy bomber formations , the Air Corps was created in 1926, making the air force somewhat more independent. In 1935 all US Army aviation associations were subordinated to General Headquarters Air Force . Until then, these were assigned to the individual army corps based on the model of General John J. Pershing from the First World War . Pershing had seen the air force primarily as a support force for ground troops. This view was also widespread in the Army in the 1920s and 1930s.

The General Headquarters Air Force established three combat groups, one each on the Atlantic coast , the Pacific coast and the Gulf of Mexico .

The General Headquarters Air Force was administratively separate from the Air Corps and only commanded combat squadrons , while the Air Corps was responsible for doctrine , training , procurement , ground facilities and their personnel.

After the beginning of the Second World War in 1939, and especially with a view to the Battle of Britain in 1940, the USA also realized that the air forces needed greater autonomy. This step was taken with the introduction of a Chief of Army Air Forces (commander in chief of the Army Air Forces ), who was directly under the command of the Chief of Staff of the Army George C. Marshall . The post went to Major General Henry H. Arnold , who advocated independence for the air force.

As part of Special Film Project 186 , cameramen of the Army Air Forces filmed the advance of American troops into Germany from March to May 1945 and the immediate post-war period in Europe. They were equipped with 16 mm cine film cameras and new types of color films. 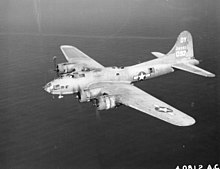 The Boeing B-17 Flying Fortress (German: Flying Fortress ) was a heavy bomber. She is the best-known USAAF bomber in World War II and was known to return from missions despite severe damage. The full crew of the B-17 consisted of ten people, four of whom were exclusively machine-gunmen. A total of 12,731 machines were manufactured.

The Boeing B-29 Superfortress was a US long-range bomber . It was the largest and most powerful bomber of World War II and was still in service in the early stages of the Cold War . The maximum take-off weight could be more than double that of the predecessor model Boeing B-17 Flying Fortress . The USAAF first used the four-engined mid - decker in the summer of 1944. B-29 were also used for the atomic bombs dropped on Hiroshima and Nagasaki .

The Consolidated B-24 Liberator was a heavy bomber . The four-engined high - wing aircraft with double vertical tail was next to the B-17 the most important strategic bomber of the USAAF in the European theater of war. The first use took place at the beginning of the Pacific War against Japan in January 1942 during the attack on Sulawesi , the first major operations with B-24D in February 1943 in New Guinea .

The North American B-25 Mitchell was a twin-engine medium-weight bomber . A total of 9,984 B-25s were produced.

The Martin B-26 Marauder was a medium-weight medium-range bomber produced by the Glenn L. Martin Company . She was a twin-engined shoulder wing plane . From 1940 to 1945 5,157 machines were built. The aircraft was used during the Second World War, first in the Pacific War and later in Europe.

After the Second World War , in which the USAAF made a significant strategic contribution to the Allied victory, on July 26, 1947 they became the independent US Air Force.