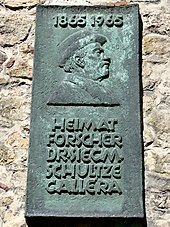 He was born Siegmar Schultze, adopted in 1904 by Baron Arthur von Galléra. Schultze-Galléra studied German , ancient languages , history and law in Halle. After doctorate in 1887 and habilitation in 1892, he worked as a private lecturer at the University of Halle . In 1943 his lectureship was declared "expired" because of " non-Aryan descent ".

From around 1910 he devoted himself to the local history of the city of Halle and the Saalkreis . He wrote 26 books and around 1000 newspaper articles on local history topics.

Due to the historical background, he published under several names. The habilitation certificate from the University of Halle still shows the name Schultze. Later he used both the name combination Schultze-Galléra and Baron von Galléra or the pseudonym "Aigremont".

Schultze-Galléra is one of the founders of a regional scientific history. Although his works are still often quoted today, many of his writings are outdated. Missing sources do not make it possible to check the hypotheses he has made. In his diary From my life , he noted that he was afraid that other colleagues might dispute his scientific work.

In 1893 he married Lucia Lözius, the daughter of a horse dealer who built a racecourse in Halle, which was later converted into the Walhalla Theater . The son Karl Siegmar Baron von Galléra was also a historian and "a National Socialist bestselling author".

Schultze-Galléra's grave is in the cemetery of the Granau desert , which today belongs to Nietleben , a district of Halle (Saale) .

In 1999 the city of Halle named a path in his honor in the Halle-Nietleben district.

On the inside of the north wall of the Granau church ruins is a memorial plaque on the occasion of the 100th birthday, created by Martin Wetzel in 1967.

The name “Schultze” goes back to a six-generation struggle of the family to return the name under which they became known in Central Germany as one of the Saalkreis families : From the Winckel . The family lost its name in the 18th century due to a politically and denominationally unaccepted love marriage between Christian Wilhelm Freiherrn from Winkel-Schierau and Christine Elisabeth Maria Countess of Anhalt. With the adoption by Arthur Baron von Galléra in 1904, the ban on using the name, which was perceived as illegal, was lifted according to family understanding. From a purely legal point of view, the family continues to exist today as “Barons von Galléra” and “Freiherrn aus dem Winkel-Schierau”.