This article relates to the humanities. For the science of “German law” see legal history # Germanistik , for the journal of the same name see Germanistik (journal) .

German studies is the academic discipline of the humanities that researches, documents and communicates the German language and German-language literature in their historical and contemporary forms . In a broader understanding, it has the task of researching the Germanic languages with their cultures and literatures.

The German linguistics or linguistics examines the German language both in its historical development ( diachrony ) and with regard to the synchronous functional relationships of individual language systems . Your subject covers all language levels of German, from Old High German (8th to 11th century) to Middle (11th to 14th century) and Early New High German (14th to 17th century) to New High German (from 17th century) . The lexemes “old”, “medium”, “early new” and “new” do not describe the geographical classification of the speakers, as one might assume with “Middle High German”, but the chronological order of the language levels. “Middle High German” means the language that was spoken between Old High German and Early New High German. The lexeme “hoch”, on the other hand, is used as a counterpart to Low German , which can be assigned to northern German and Dutch regions.

In addition, she analyzes the German language under the various aspects (sounds / spellings, inflected forms, words, sentences, texts, etc.) and in their various manifestations, such as the linguistic-sociological stratification (colloquial language, written language, etc.) or the linguistic-geographical structure ( dialects, etc. .).

German literature is subdivided into a (formerly so-called) "old department", which deals with German-language literature from the beginnings in the early Middle Ages to the transition to modern times (around the 16th century) and is now referred to as (German) medieval studies , and a “New Department”, which deals with “Modern German Literature” (literature from the 16th century to the present day). In Zurich the line between Medieval Studies and Modern German Literature is drawn differently: Baroque and Early Modern Times are still counted as Medieval Studies.

The relationship between German literature and the literatures of foreign-language countries (history of reception and impact) and historical circumstances, e.g. B. in a European context, form other important areas of work, but are often pursued by German studies with the focus on one's own understanding of literary studies. German studies based in Germany often describe itself as "general literary studies". Other philologies are thus implicitly designed as carriers of one's own, absolutely posited scientific practices.

The German didactics is the subject didactics of the German; This sub-area deals in particular with teaching the subject in schools, but is often interdisciplinary (educational sciences, psychology, sociology, etc.).

At some universities in the northern half of Germany - Kiel, Hamburg, Oldenburg, Münster, Bielefeld, Bremen, Göttingen, Rostock and Greifswald - research and teaching in Low German take place as part of German studies . 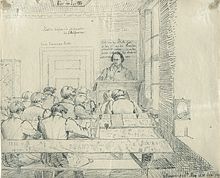 Research into Old High German legal texts as the beginning of German studies: “In the college with Jacob Grimm ”, Göttingen, May 28, 1830

As an extremely poorly systematized area of ​​interest for individual scholars, German studies in the area of ​​Germanic antiquity can be traced back to Tacitus . This indicated in his Annales that the Germanic tribes (without specifying the tribe) sang about Arminius in their songs in the aftermath of the Varus Battle in the year 9 AD. In terms of German linguistic and literary studies, however, it only begins with the research and publication of old legal and historical sources as well as medieval Bible translations at the time of humanism . As an independent science alongside classical philology and as a university discipline , German studies was founded at the beginning of the 19th century by Georg Friedrich Benecke , the Brothers Grimm and Karl Lachmann . Their scholarly interest in the literary past was clearly shaped by the romantic aesthetics with its rediscovery of medieval poetry.

The first associate professor for German studies was Friedrich Heinrich von der Hagen in Berlin from 1810 , while in 1858 the "German Philological Seminar" was established as the first German academic institution at the University of Rostock . The discussions largely revolved around the Nibelungenlied and the minnesang . Just like the works of Martin Luther , these should serve as evidence of a specifically “German” cultural tradition that does not have to shy away from comparison with other nations. Similar to the Italy of the Risorgimento , this happened in Germany in the awareness of a desired, but initially failed state unification. The nation-state perspective - which also existed in France, England and other countries - was of course questionable from the outset, as it ran the risk of merely reflecting on one's own chauvinism . After working up of the Middle Ages and Reformation time by source editions and driven research debates in the 19th century took place the "rediscovery" of Baroque literature in the early 20th century.

The reworking of Baroque poetry presented another problem: One orientated oneself on the image of the “great”, ingenious creator of literature, an idea that came from the originality aesthetics of the 19th century. This concept of poetry did not exist in the Baroque period, on the contrary, one wanted and should prove one's art by imitating classical models. Likewise, in the 19th century it was not really noticed that the classic genre triad of epic , drama and lyric poetry was based on a predominantly oral tradition in antiquity and that it has only made limited sense in the "literary business" since the early modern era, although it still makes sense was brought into the field. This led to misunderstandings that have not yet been resolved.

German literary studies were instrumentalized in many respects by the objectives of Prussian- Wilhelmine politics after the Franco-Prussian War of 1870/71. The dominance of German culture over that of other nations should be proven and illustrated, although Paris, as Walter Benjamin later emphasized, was still the cultural “capital of the 19th century”. With this in mind, selected editions and multi-volume literary history lexicons were created.

During the time of National Socialism , the rulers of the state demanded ideological support from German studies and took advantage of their tendency towards Pan- Germanism , which originated from the time of small states . The resolution of ideological biases after World War II was slow. In the 1950s which was immanent Interpretations popular method that a strictly oriented to the wording of the seal, motifs and metaphors rose illuminating interpretation of the paradigm and ausklammerte every interpretation with regard to external factors and circumstances of the time; and it was Gerhard Eis , who between 1937 and 1944 ( New Ways of Regional History of Literature) established specialist prose research for German studies in the Middle Ages based on factual and practical texts (based on approaches in the 19th century) that went beyond what was previously largely fictional literature well-founded medieval studies. Occasionally, psychoanalytic methods were used to try to explain the author's “personality” behind the poetry.

Since the 1960s, a differentiation of the methods used began, which resulted in an almost unmanageable methodological diversity. The various approaches include a. (based on the example of American studies and Romance studies) structuralism , reception aesthetics and narrative studies . In the 1970s, the spectrum was expanded to include intertextuality theory and discourse analysis , post-structuralist , semiotic and deconstructivist , feminist and post-feminist as well as field and system theoretical perspectives. Overall, German studies based in Germany, especially in their comparative currents and “world literary” interests, remain stuck with the national philological paradigm (cf. the term “foreign German studies” for international research and the habitualized equation of German literature with literature par excellence).

At the beginning of the 1980s, Alois Wierlacher was one of the first scientists to start the discussion that German studies in German-speaking countries must be oriented differently than in countries with a different mother tongue. He called for German studies that should constitute a “comparative foreign cultural science”. Although his theses for a comprehensive reorientation of German studies and the subject of German as a foreign language (DaF) were very controversial, the discussion that Wierlacher had begun subsequently led to a greater awareness of the differences between German studies in German-speaking countries and German studies abroad . As a result of this discussion, the term “German Studies Abroad” emerged, which is now also used to designate university institutions. Of course, this distinction is only accepted by well-known “Germanists abroad” with the qualification that it primarily relates to non-native-speaking teaching situations, but German studies in linguistics and literary studies take place independent of location. At most, German studies abroad has greater scientific neutrality, distance and objectivity wherever in-country German studies treat individual research questions with a need for national identity in a partisan manner. All in all, the concept of German studies abroad already conveys a national claim to sole representation of German German studies as a general and generally applicable literary study. Where in other cultural studies the analytical lead of informed external descriptions is recognized, German German studies continues to shy away from phenomena such as "German Studies" and reject them as supposedly distant, apparently only curious offshoots of their own central interpretative sovereignty over German literary and cultural phenomena of yourself. This explains why advanced, internationally successful approaches to German research often do not make it to Germany or can be dismissed there as local deviations with the superior gaze of a “domestic German studies”.