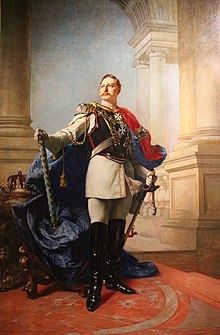 The term Wilhelminism refers to the Wilhelminian period or the Wilhelminian epoch (1890-1914) and describes the thirty-year reign of Kaiser Wilhelm II between 1888 and 1918 in the German Empire . The epoch is characterized by specific features and phenomena in politics, society, culture and art. The beginning of this period is the dismissal of Otto von Bismarck as Chancellor in 1890, two years after Wilhelm II became German Emperor . The end of Wilhelminism went hand in hand with the end of the First World War and the abdication of the Kaiser .

Elements and characteristics of Wilhelminism 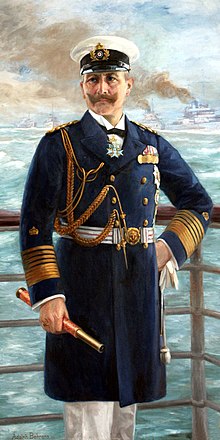 Wilhelm II as Grand Admiral (painting by Adolph Behrens, 1913, which is in the Mürwik Naval School )

Wilhelminism does not go back to a draft of Wilhelm II. Rather, the term refers to Wilhelm's outward appearance and his prepotent attitude, an overestimation of himself that his grandfather Wilhelm I. had already noticed.

Wilhelm II's policy was based on the Prussian militarism that was trapped in the East Elbe Junkers and, due to his ambitions in the heyday of imperialism , was also aimed at establishing Germany as a world power after Germany had the majority of its colonial possessions in Africa and in the mid-1880s the South Seas had acquired.

Wilhelm was fascinated by the navy . His endeavor was to massively strengthen it and thereby the German naval regime . His sentence stood for this: “Our future lies on the water.” This was also reflected in the everyday life of the people. Up until the middle of the twentieth century, boys were dressed in sailor suits and thus familiarized with the value of the navy at an early stage.

Even if the Pickelhaube existed before, it is symbolic of the German military and militarism of that time, but also of the age as a whole. After all, the pompous military parades were a striking form of expression of Wilhelminism . In various sign languages , the outstretched index finger placed in front of the forehead, which is supposed to indicate the spiked hat, is still the symbol for " German " or "German".

The term Wilhelminism also characterizes the socio- cultural climate of the reign of Wilhelm II, which found expression in rigidly patriarchal and conservative orientations, similar to the Victorian era of the United Kingdom of Great Britain and Ireland . Socialism and social democracy were seen as the main domestic political threat. At the same time, the time was characterized by an extraordinary belief in progress, which strongly favored the enormous prosperity of the empire, but also stood in tension with social conservatism.

The term Wilhelminism is also applied to the styles prevailing in the visual arts and architecture at the time . The Wilhelminian style in architecture largely corresponds to the neo-baroque . It is extremely representative and should give expression to the imperial claim to power of the German Empire. One example is the pompous Siegesallee , mocked by the Berlin population as "Puppenallee" , which was given official status with Wilhelm's so-called "gutter speech" at the opening of the magnificent boulevard on December 18, 1901. Nevertheless, the Wilhelmine style made classicist sobriety in large public buildings, i.e. court buildings, main post offices, Reichsbahnhöfe and similar buildings, the top priority. The Mürwik Naval School in Flensburg - Mürwik (built in 1907 by Adalbert Kelm ) is another example of Wilhelmine architecture. However, this building is not assigned to the neo-baroque style, but to the north German brick Gothic style .

In the literary field, " Heimatkunst " flourished at this time . Wilhelminism was heavily criticized in the novel The Subject by Heinrich Mann (1914) with the means of satire .

SPD co- founder Wilhelm Liebknecht said in 1872 about the military nature of the school system and the state: