This article deals with the writer, for the mathematician see Henry Mann , for other namesake see Heinrich Mann (disambiguation)

Luiz Heinrich Mann (born March 27, 1871 in Lübeck , † March 11, 1950 in Santa Monica , California ) was a German writer from the Mann family . He was the older brother of Thomas Mann , whose popularity continued to grow since the 1920s and still outshines Heinrich's earlier successes today.

From 1930 Mann was president of the Poetry Section of the Prussian Academy of the Arts , from which he was expelled in 1933 after the National Socialists came to power . The man, who until then had mostly lived in Munich , first emigrated to France , then to the USA . In exile he wrote numerous works, including many anti-fascist texts.

His storytelling was shaped by the French novel of the 19th century. His works often had intentions critical of society; the early works are often biting satires on bourgeois pseudo-morality, which man - inspired by Friedrich Nietzsche and Gabriele D'Annunzio  - opposed a world of beauty and art.

In the following works, Mann analyzed the authoritarian structures of the German Empire in the age of Wilhelminism . The result was initially u. a. the social satire The Blue Angel , as well as three novels, now called the trilogy Empire are known, the first part of Straw convinced artistically most. In exile he wrote his main work, the novels The Youth of King Henri Quatre and The Completion of King Henri Quatre .

His narrative work stands alongside a rich activity as an essayist and publicist . He tended towards democracy very early on , opposed National Socialism from the outset of the First World War and early on, whose followers burned Mann's works in public .

Julia Mann with her three oldest children. From right: Thomas, Heinrich and Julia 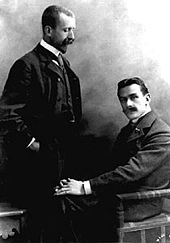 After Heinrich Mann had left the Katharineum in 1889 in the Unterprima , he began an apprenticeship in bookselling in Dresden in October , which he broke off after just under a year. From August 1890 to 1892 he volunteered at S. Fischer Verlag in Berlin . At the same time he was studying at the Friedrich Wilhelms University . In 1892 he suffered a lung haemorrhage and therefore stayed in Wiesbaden, in the Black Forest (August 1892) and Lausanne for a cure.

In 1893 the family moved to Munich , from where Heinrich Mann made several trips after visiting Saint Petersburg in 1884 . From 1899 to the beginning of the First World War , he stayed in various places, for example - at times accompanied by his brother Thomas - for a longer period in the small town of Palestrina near Rome , but mainly in Riva del Garda on Lake Garda in the sanatorium of the doctor friend Christoph Hartung von Hartungen .

His well-known work Professor Unrat or the end of a tyrant was written in 1904 and appeared a year later. In Mann's hometown of Lübeck, the book was hushed up or criticized. The book was actually forbidden. The numerous translations and the film version in 1930 under the title The Blue Angel became Professor filth worldwide fame.

After Thomas Mann's thoughts in the war appeared (1914), in which he expressed himself nationally in Germany, Heinrich Mann broke off contact with his brother; Heinrich Mann was rather close to the Social Democrats and fundamentally refused Germany's participation in the First World War . In 1917 a rapprochement was attempted at the instigation of Thomas Mann's wife Katia , but it was not until 1922 that the reconciliation succeeded.

After the end of the war, his most successful work, Der Untertan , appeared, the preprint of which in the magazine Die Zeit im Bild had to be canceled when the war began in 1914. It sold nearly one hundred thousand times in the first few weeks after it was released. In the Weimar Republic Heinrich Mann took part in the expressionist pacifist-socialist movement activism .

His mother died in 1923 and his sister Julia took her own life in 1927. After separating from his first wife Maria, who was to be divorced in 1930, Mann moved to Berlin in 1928 . Maria Kanová went back to Prague with their daughter. From 1942 to 1945 she was interned in the Theresienstadt concentration camp because of her Jewish descent . She died of the consequences of imprisonment in 1947. Heinrich Mann had already met his future wife Nelly Kröger in 1929.

In 1931 Heinrich Mann became president of the poetry section of the Prussian Academy of the Arts , of which he had been a member since 1926. In the same year, he and Albert Einstein drew attention to the murder of Croatian intellectual Milan Šufflay in an open letter to the New York Times .

Burial of the urn with Heinrich Mann's ashes, Berlin, 1961

Together with Käthe Kollwitz and Albert Einstein , he signed twice, in 1932 and 1933, the urgent appeal for unity of action between the Communist Party of Germany and the Social Democratic Party of Germany against the National Socialists . He left Germany in 1933 shortly before the Reichstag fire in February and emigrated via Sanary-sur-Mer to Nice , where he lived until 1940. Because of his renewed signing of the Urgent Appeal on February 14, 1933, the National Socialists excluded him from the Academy of Arts, and in August 1933 his German citizenship was revoked; Mann was on the first expatriation list of the German Reich in 1933 .

Page 1 of the German Information No. 250 of October 12, 1937. The report here is about the demand made in the National Socialist press for the colonies of France and England to be surrendered.

From 1935 to 1938 he wrote the two-volume historical novel The Youth of King Henri Quatre and The Completion of King Henri Quatre . In 1936 he received Czechoslovak citizenship. During his emigration, Mann was elected chairman of the preparatory committee of the German Popular Front ( Lutetia district ), co-editor of Deutsche Informationen and, in addition, honorary president of the SPD.

In 1939 Nelly Kröger and Heinrich Mann married; Both fled with his nephew Golo Mann and the Werfel couple to the USA via Spain and Portugal in 1940 . The country of his exile and its culture remained alien to him, his brother Thomas had to support him financially. In December 1944, his wife Nelly, who had suffered from severe drinking problems, took her own life.

In 1949 Heinrich Mann was elected President of the German Academy of the Arts in East Berlin , but died in Santa Monica in 1950 before he planned to return to Germany (nearby, in Pacific Palisades , his brother Thomas lived with his family); that is where he was buried. In 1961 his urn was transferred to Germany and buried in the Dorotheenstädtischer Friedhof in East Berlin. The grave is one of the honor graves of the State of Berlin.

The Heinrich Mann Prize was named after him.

From 1885 Heinrich Mann published his first short stories and from 1887 also poetic texts. The first reviews appeared in Die Gesellschaft in 1891 and also in Die Gegenwart in 1892 .

His first novel In a Family was published in 1894. From March 1895 to July 1896, Heinrich Mann was the editor of the chauvinist and radically anti-Semitic monthly The Twentieth Century . The Wonderful and Other Stories appeared in 1897, and A Crime and Other Stories the following year .

At the time of the Wilhelmine Empire, political and culturally critical - in some cases also anti-Semitic  - essays were written, for example in 1900, Im Schlaraffenland. A novel among fine people , 1903 The Goddesses or The Three Novels of the Duchess of Assy and the novel The Hunt for Love . In 1905 the novel Professor Unrat or the end of a tyrant and other publications followed.

Heinrich Mann worked on the novel Der Untertan from 1912. The preprint in the time in the picture fell victim to the censorship and was stopped with the beginning of the First World War. The work was first published in Russian in 1915 and, from 1916, as a private edition in German. Only after the end of the war in 1918 was the novel published in Germany in a noteworthy edition.

In the early novels The Goddesses or The Three Novels of the Duchess of Assy and The Small City , Heinrich Mann processed impressions that he had gained through his long stay in Italy with his brother Thomas, in particular the numerous stays in Riva on Lake Garda. The small town describes the conditions in a small Italian town. The Goddesses or The Three Novels of the Duchess of Assy became the novel of a whole generation: Gottfried Benn , René Schickele and Otto Flake were enthusiastic. “They are the adventures of a great lady from Dalmatia. In the first part it glows with longing for freedom, in the second with a feeling for art, in the third with ardor. She is remarkably human and taken seriously; most of the other figures are funny animals like in the 'land of milk and honey'. The plot is moving, it extends to Zara, Paris, Vienna, Rome, Venice, Naples. If everything works out, the 1st part will be exotic, colorful, the 2nd art drunk, the 3rd obscene and bitter. ”(Heinrich Mann to his publisher Albert Langen on December 2nd, 1900)

The novels Professor Unrat or the end of a tyrant (1905) and Der Untertan (1918) are of a completely different kind. In these works, in pointed, sometimes amusing formulations, he sharply criticized the political and moral conditions in Wilhelmine Germany , and of servility of the German bourgeoisie and the social injustice of that time. The moral indignation about what he felt was the “hypocritical decency” of his contemporaries and peers, their “dull nationalism ” and their “ruthless exploitation” of the working population was also the subject of many of his stories. The "opportunism of trade union officials and social democrats ", whose fixation on a purely material improvement of the workers' situation stands above demands for more freedom, is just as ruthlessly criticized as what he sees as the "demon of the bourgeoisie " to which he himself felt he belonged and one of them He also confessed to “positive values, a willingness to perform and educate”.

The two volumes The Youth of King Henri Quatre from 1935 and The Completion of King Henri Quatre from 1938 are considered Heinrich Mann's most important works. The first plans go back to 1925 (Wysling / Schmidlin 1994). Thomas Mann's comment: “In the evening Heinrich Henri IV finished, a rare book, far superior to everything that is produced in Germany today, great wealth and flexibility of artistic means, the sense of history raised and deepened by the present and often too pointed , strong and encouraging in the cutting spiritual and moral contempt of human error and stupidity, poignant poetic moments like death and the wet nurse and the last battle. Great overall impression: a work that honors the Emigranten-Verlag and the entire emigration and will rise to high honors after things have turned in Germany. "

Heinrich Mann's extensive estate and its 4,700-volume estate library are located in the literary archive of the Academy of Arts . The inventory contains u. a. the complete manuscripts of the novels In a Family , Interracial , The Small Town , The Subject , The Poor , The Head , The Breath , as well as work notes and letters. Part of the estate is in the German Literature Archive in Marbach . Individual pieces of it can be seen in the permanent exhibition in the Museum of Modern Literature in Marbach, in particular his collection of keywords on The Subject , the letter attempting a reconciliation to his brother Thomas Mann and plans for his memoir An Age is visited . The partial estate from Heinrich Mann's time in exile in California is in the Feuchtwanger Memorial Library at the University of Southern California in Los Angeles. The partial estate includes Mann's manuscript for his Henri IV as well as numerous illustrations that he made in exile. Further partial bequests are in the Museum of Czech Literature in Prague and in the Buddenbrookhaus in Lübeck.

Autobiographical and Posthumous
An Age is Visited  | Welcome to the world

President of the Academy of Arts of the GDR