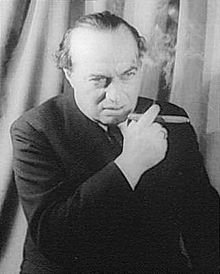 Franz Viktor Werfel (born September 10, 1890 in Prague ; died August 26, 1945 in Beverly Hills ) was an Austrian writer of Jewish - German-Bohemian origin. He went into exile due to National Socialist rule and became a US citizen in 1941. He was a spokesman for lyrical expressionism .

His books were bestsellers in the 1920s and 1930s . His popularity is based primarily on his narrative works and plays, but Werfel himself wrote his poetry about them . With his novel Verdi. Roman der Oper (1924) Werfel became a protagonist of the Verdi renaissance in Germany . His two-volume historical novel The Forty Days of Musa Dagh 1933/47 and The Song of Bernadette from 1941 were particularly well-known . His last novel Star of the Unborn from 1945 reveals Werfel's Dante reception.

Franz Werfel was born on September 10, 1890 in Prague as the son of the wealthy glove manufacturer Rudolf Werfel and his wife Albine, nee. Kiss, born. The family belonged to the German-Bohemian Judaism and regularly visited the Maisel Synagogue . The Catholic piety of his Czech nanny, the attendance of the private elementary school of the Piarists and the baroque catholicity of his hometown shaped the young Werfel. Werfel passed his matriculation examination in 1909 at the German grammar school Stefansgasse in Prague. He published poems even during his school days. 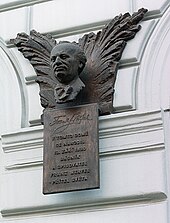 Werfel was in contact with the literary figures of the Prague district . Werfel was lifelong friends with the writers Willy Haas , Max Brod and Franz Kafka as well as the actor Ernst Deutsch and the literary agent Ernst Polak , his former classmate.

His younger sister Hanna Fuchs-Robettin (1896–1964) went down in music history as the lover of Alban Berg , while his youngest sister Marianne Rieser (1899–1965) became known as an actress.

In 1910 Werfel completed a traineeship at a Hamburg freight forwarding company. In 1911/1912 he did military service as a one-year volunteer on the Prague Hradschin . From 1912 to 1915 he was an editor at Kurt Wolff Verlag in Leipzig . Under his joint responsibility, the expressionist series of publications, The Youngest Day, was published .

Werfel met Rainer Maria Rilke and made friends with Walter Hasenclever and Karl Kraus , with whom he later fell out. He published a. a. also in the Hungarian German-language newspaper Pester Lloyd .

From 1915 to 1917 Werfel served on the East Galician front. In 1917 he was transferred to the Imperial and Royal War Press Headquarters in Vienna. Werfel campaigned for the translation of Petr Bezruč's Silesian songs into German. In 1916 he wrote the preface for the translation by Rudolf Fuchs . 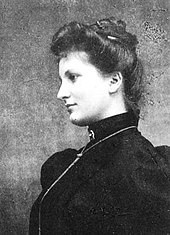 Werfel lived in Vienna for the next two decades and made friends there with Alma Mahler , Gustav Mahler's widow and wife of Walter Gropius . Under Alma's influence, he largely withdrew from public life, but often went on trips. B. to Breitenstein am Semmering , Santa Margherita Ligure and Venice . During his second trip to the Middle East in early 1930, he met survivors of the Armenian genocide during the First World War in an orphanage in Syria . This encounter inspired him to write his novel The Forty Days of Musa Dagh , in which the fate of around 5000 Armenians is described who fled from the Ottoman army on Musa Dağı ( Mount Moses).

In 1918, while she was still married to Walter Gropius, Alma gave birth to Werfel's presumed son, Martin Carl Johannes, who died in 1919.

On August 7, 1929, Werfel married Alma Mahler, who had been divorced from Gropius in 1920. Friedrich Torberg described her in Aunt Jolesch's Heirs as “a woman with a tremendous understanding of art and art instinct. If she was convinced of someone's talent, she left no other path open for the owner - with an energy that often borders on brutality - than that of fulfillment. "

The Prussian Academy of the Arts led Werfel as a member in the poetry section. At the instigation of Gottfried Benn , Werfel was expelled in the spring of 1933.

At the height of his American bestseller successes, Franz Werfel said to his friend Friedrich Torberg: "If I hadn't met Alma - I would have written a hundred more poems and would have degenerated blissfully ..." According to Torberg, Werfel had "often and often talked about how unimaginable a one Life without Alma would have been for him ”.

In 1935 his stepdaughter Manon Gropius , who was suffering from polio, died ; Alban Berg composed his concerto for violin and orchestra Dem Income of an Angel for her . 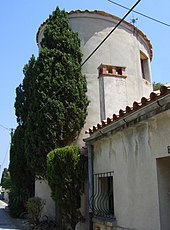 Former apartment of Franz Werfel and Alma Mahler-Werfel in Sanary-sur-Mer. There is a memorial plaque there.

After the “Anschluss” of Austria in 1938, Werfel, who had already been abroad with his wife in the winter of 1937/1938 and did not return after the Anschluss, settled with Alma in Sanary-sur-Mer in southern France , where too other emigrants lived. In 1940, when the Wehrmacht occupied large parts of France , he found refuge in Lourdes ; Werfel vowed to write a book about St. Bernadette if he were saved .

He crossed the Pyrenees to Spain on foot with his wife Alma and Heinrich , Nelly and Golo Mann . The couple reached Portugal from there and emigrated in October 1940 on board the Greek steamer Nea Hellas to the USA , to Beverly Hills and Santa Barbara in California.

Werfel received American citizenship in 1941 . In 1943 his novel The Song of Bernadette with Jennifer Jones in the title role was filmed with great success .

Franz Werfel monument by Ohan Petrosjan in the Schillerpark in Vienna. The granite pillar bears the inscription: “With gratitude and respect. The Armenian people. "

In 1943, Werfel's angina worsened and he suffered two heart attacks . Werfel died of a heart attack on August 26, 1945 at the age of 54 . He was buried in Beverly Hills in Rosedale Cemetery .

In 1947, Theodor Körner , then Mayor of the City of Vienna and later Federal President, reserved an honorary grave for him in Vienna's Central Cemetery , and the grave site in Beverly Hills was upgraded to an honorary grave. On the basis of an initiative taken by the Cultural Office of the City of Vienna and the Austrian Society for Literature in 1974, Werfel's remains were transferred to Vienna in 1975 and buried on July 21, 1975 in the Vienna Central Cemetery ( honorary grave group 32 C, number 39). Werfel was granted Armenian citizenship posthumously in 2006.

In honor of Werfel, his name was used after his death:

The Austria Library in the Armenian capital Yerevan , which contains around 1500 books , has also been named Franz Werfels since 2012.