The title of this article is ambiguous. For the car model, see Honda Elysion , for other meanings see Elysium . 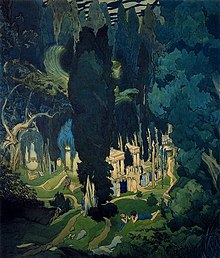 The Elysion ( ancient Greek Ἠλύσιον [Πεδίον] Elysion [Pedion] "the blessed [field]", Latin the Elysium or campus Elysius , plural campi Elysii ) is in Greek mythology that "island of the blessed" ( μακάρων νῆnstenesος ) mak äκσρων νῆσος West of the globe, which is surrounded by the Ocean . Those heroes who were loved by the gods or to whom they gave immortality are raptured to these “Elysian realms” . Some believed they recognized the Canary Islands in these islands . Today Madeira, the Azores, the Canaries and Cape Verde are considered as other options. In biogeography they are summarized together with the term Macaronesia , derived from the Greek name .

Later poets, like Virgil , moved the Elysion to that part of the underworld into which the pious and righteous, judged by the judges of the dead, moved. It was no longer part of the Islands of the Blessed.

In complete contrast to the Tartaros, these are paradisiacal , rose-adorned meadows, where eternal spring reigns, and where a nectar- like drink from a source of Lethe enables all earthly suffering to be forgotten forever. Menelaus and Helena , Kadmos , the founder of Thebes , as well as Peleus and Achilles are said to be there alongside other heroes and to pass the time in the shade of incense trees with horse riding and gymnastics, dice and lute games . The brother of Minos , Rhadamanthys , rules over this plane of arrival or Elysian realms , a paradisiacal place to which Kronos was also brought when he had slept intoxicated by honey and was thus able to be tied up by Zeus . According to the Orphics - who tell many things differently - he is known there as the husband of Rhea and as the king.

The poet Horace transferred the mythical idea into the political reality of his time. Desperate about the never-ending civil war, he urged the Romans in a poem to leave their unhappy city and emigrate to the "arva beata ..., divites et insulas" ("blissful fields ... and rich islands"). As these islands of the arva beata , promised by the poet in the prophetic tone , one understood the Elysian realms in the west.

Take up the topic