The title of this article is ambiguous. Further meanings are listed under sounds (disambiguation) .

Lute with a broken string, excerpt from The Ambassadors by Hans Holbein the Younger (1533)

The lute (from late Middle High German, lūte from Arabic العود, DMG al-ʿūd  , the stick, the wood, the lute ') is a plucked instrument with a body and attached neck as well as strings running parallel to the top of the instrument. As sounds in the narrow sense is called from the Arabic lute Oud resulting European sounds .

In musical instrument science, the term lute instrument (called lute in a broader sense) is used. According to the Hornbostel-Sachs system, it describes a specific group of stringed instruments.

The name lute comes from the Arabic language . Arabic al-ʿūd  /العودmeans “the wood” (originally “branch”, “rod”, “stick”) and refers to the material of the instrument. May have been 'ūd in the early Islamic period for a lute with a wooden ceiling and a body made of wood slats on the distinction between the older phonetic form mizhar used, the thick-walled wooden body as in barbat was covered with skin. This view, held by Henry George Farmer , is relativized by the observation that Arab authors of the 10th century often used the terms ʿūd, mizhar and barbat synonymously or differentiated them according to other criteria. Ibn Chaldūn referred to the plectrum used to play the barbat as ʿūd in the 14th century . Rodolphe d'Erlanger (1930) was the first to point out the connotation of ʿūd , "turtle", which occurs in two early Arabic lexicons . This creates a connection to the Greek word for turtle, chelys , which in ancient times meant a lyre with turtle shell. In German-language lexicons of the 18th and 19th centuries In the 19th century, chelys is equated with the lute or the violin.

From ʿūd with the preceding article al- (ال) Was in Italian Leuto / liuto , in Spanish laúd , in Portuguese alaude , the French Lutheran , in English lute and German sounds .

Two small figures on unrolled seals from the Akkad period , dating from the middle of the 24th to the middle of the 22nd century BC, are not clearly recognizable as lute players . To be dated. In the following there is a gap in the tradition up to the earliest unambiguous images of sounds from the beginning of the 2nd millennium BC. BC, who come from an area from northern Syria to Mesopotamia . The widespread use of depictions in the area of ​​the fertile crescent indicates that lute instruments were already part of the culture of the nomadic people there. Outside of the Mesopotamian region of origin, the lute first appeared in ancient Egypt at the time of the Hyksos (18th century BC).

In the first centuries AD, in addition to the vina bow harp, the first lute instruments were used in India , the names of which are not clearly known at the time. One possible name could have been kacchapi . The word lives on as hasapi , kacapi , kulcapi or similar for lute instruments or zithers in Southeast Asia.

The long-necked lute, known in Persian as setar (“three string”), perhaps goes back to ancient Indian models. The Indian sitar is seen as a late development from long-necked lutes that began on the 9th and 10th centuries. Century can be seen in Indian temple reliefs, and associated with Mughal influences from Persia and Central Asia. The oud , a short-necked lute, can be seen as the forerunner of the European sounds. The instrument developed from the form of the lute, the barbat , which was widespread in Persia in the 9th century . It is from there that the Chinese possibly adopted the bowl -neck lute known today as pipa around the 4th century AD .

Preforms of the European lute may have come to Europe through crusaders . Perhaps it found its way to Central Europe earlier via Moorish Spain or on the way through the Byzantine Empire bordering Persia . In Europe, she received frets of gut strings and was played instead of the pick starting around 1500 with his fingers.

During the Renaissance , the lute was considered the queen of instruments. The oldest surviving lutes date from around 1500. The lute had the practical advantage that it was an easily transportable foundation instrument . Its importance gradually declined in the 17th century. In the 18th century, the baroque lute and other lute instruments such as mandora , theorbo and angélique were eventually supplanted by other stringed and keyboard instruments until they were replaced by the guitar in the Romantic era .

A late legacy of development, the guitar lute , was popular among wandering birds and the youth music movement in the early 20th century . With the rediscovery of early music , the lute also experienced a revival in its various forms during the 20th century.

Characteristic of the lute is the teardrop-shaped sound body ("shell") composed of several wood chips. In addition to fruit trees (plum, pear, cherry), maple wood in particular is used. Flower ash, yew wood, rosewood, ebony, snakewood and ivory were also used for chips in Europe in the 16th to 18th centuries. The top is mostly made of spruce wood and is divided by several beams inside the lute. The neck is glued to the shell and the wooden block under the ceiling in such a way that the fingerboard and the ceiling are on the same level. A rosette is carved into the ceiling ("star"). The tailpiece is glued on between the rosette and the lower edge of the ceiling ("bridge", "latch"). The pegbox is glued to the upper end of the neck and is usually bent backwards. The builders of lutes are called lute makers (formerly also lute makers).

From around 1600, forms of the lute with an increased number of strings, an extended neck and a second pegbox, to which additional bass choirs were attached ( Arciliuto , Liuto attiorbato , Theorbe , Angelica , German baroque lute with swan neck ) emerged. Some of these new lutes were used especially for the figured bass (Arciliuto, Theorbo).

Lute strings were made from sheep gut during the Renaissance and Baroque periods. Michael Praetorius also reported in 1618 the use of steel and brass strings for lute and theorbo. Plastic strings are widely used by contemporary players.

Lutes are strung with pairs of strings, so-called choirs . The first choir ( chanterelle ) consists - in contrast to the majority of traditional instruments - today only from one string. In the baroque lute , the first and second choirs are often single strings.

Until 1500 lutes had four or five, then initially six choirs. From around 1600 seven or more choirs were used. The number rose to twelve choirs by around 1640. Around 1720 the number of strings was increased to thirteen choirs.

The six- to seven-choir renaissance lute is in third-fourth tuning (before 1550 generally the intervals fourth - fourth - major third - fourth - fourth), e.g. B. e '- h - f sharp - d - A - E (or g' - d '- a - f - c - G - F for the tenor lute). However, the absolute pitch was not initially fixed. In contemporary textbooks (according to Martin Agricola 1528 on page 83 of his Musica instrumentalis ) it is often recommended to simply tune the highest lute string (the chanterelle) as high as possible.

In the 16th century, the fourth, fifth and sixth string choir mostly consisted of a keynote and an octave string. The bass choirs added from 1600 on were also tuned in octaves.

From around 1620, French lutenists experimented with new tunings for the lute strings ( René Mézangeau , Pierre Gaultier ). Around the middle of the century, the so-called D minor tuning began to establish itself on the baroque lute .

Up until the 15th century, the lute, like the Arabic oud, was struck with a pick, which usually consisted of a strong bird quill.

Around 1500, first described by Johannes Tinctoris in 1484, the lutenists developed the playing technique with their fingers, which made polyphonic playing possible. In this technique, described in textbooks by Hans Judenkönig from 1511 and lute books of the 16th and 17th centuries, runs are played with the thumb and forefinger of the right hand - a technique that was developed from playing the plectrum - while chords with thumb, index, The middle and ring fingers of the right hand are struck. The fingers of the right hand are held parallel to the strings, while the little finger - as in the past when playing the plectrum - rests on the ceiling. Today, this technique is often called the “thumb-inside technique” because the thumb strikes in the direction of the inside of the hand or is below the index finger. 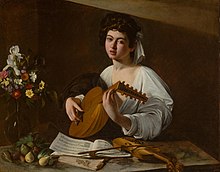 Caravaggio : The Lute Player (around 1595), lute with a defective body

Due to the livelier bass in the music of the late Renaissance and Baroque periods, the lutenists around 1600 developed the so-called "thumb-outside technique" for the right hand. The little finger is still used as a support finger, but the hand is rotated so that the fingers touch the strings at almost a right angle, while the outstretched thumb now mainly operates the bass strings and the wrist is not moved.

Until the end of the 15th century, the lute was likely to have been used for singing accompaniment in the manner of heterophony . They show medieval images together with string instruments and the harp.

At the beginning of the written tradition of her music ( Francesco Spinacino , Intabulatura de Lauto, Venice 1507), in addition to tablatures of vocal music and instrumental dance music, there are already independent, instrumentally composed solo pieces ( Ricercar ). The emancipation of instrumental music leads to the creation of free forms such as toccata , fantasy , preamble, prelude for the lute .

The Elizabethan lute song flourished around 1600 ( John Dowland ). This was followed by the blossoming of the French air de court , in which the lute initially took on the independent instrumental accompaniment of the singing ( Gabriel Bataille , Nicholas Lanier ), a role that was increasingly taken over by the theorbo in the course of the 17th century ( monody ).

From the middle of the 17th century, the influence of French lutenists dominated Europe ( René Mézangeau , Ennemond Gaultier , François Dufault and others). They mainly compose purely instrumental, stylized dance movements and develop the lutenistic style of the broken melody (style luthé), which is initially also imitated by clavecinists such as Johann Jakob Froberger , Louis Couperin and Nicolas Antoine Le Bègue .

Around 1700, the French style in Silesia, Bohemia and Austria was increasingly mixed with cantable elements ( Esaias Reusner , Losy ), until finally Silvius Leopold Weiss took lute music in the Italian style to the pinnacle of art for the last time. After him, the lute only led a shadowy existence until the pre-classical period .

From the 15th to the 18th century, music for lute was notated in the form of tablature . Later editions in musical notation show the lute as a so-called transposing instrument , since the notation is an octave higher than the instrument sounds.

After that, almost no more works were written for the (European) lute, even if there were occasional compositions for the instrument until recently.

Important lutenists of the 20th and 21st centuries (selection)