In order to understand early music, it helps to also rely on historical image documents, because the practice of making music and the instruments used have undergone, in some cases, major changes over the centuries. Lattanzio Gambara shows in his fresco (around 1560) how string instruments looked in his time and how they were played in contrast to today's practice.

Early music refers to European styles of music from different eras around before the year 1750 of classical music .

Performances and recordings of early music are essentially the domain of specialized musicians and ensembles , since special historical musical instruments and a lot of specialist and practical knowledge about music history , instrumentation , playing styles, tuning systems, etc. must be available in order to find out how the music of earlier epochs could have sounded.

The attempts at reconstruction are based on image documents and music texts (see notations ). In England, early music was passed down almost completely from generation to generation. Nevertheless, the music changed through the process of passing on ( handing down ). 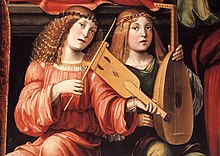 As early as 1888, people began to collect early music instruments in Berlin; here a serpent from the Musikinstrumenten-Museum Berlin

The concept of early music in the Middle Ages

Already in the Middle Ages there was a distinction between “old” and “new music”. From 1320 onwards, the music style that had now been overcome was called Ars antiqua ('old art' or 'music') and the new music composed from then on, the Ars nova, was celebrated as the overcoming of this old style.

Early music and the bourgeois musical culture of the 19th century

With the emergence of bourgeois concert life around 1800, a repertoire began to develop that largely disregarded pre-classical music and concentrated on the newly emerging compositions.

The works of Johann Sebastian Bach were indeed studied after his death in 1750 by another composer, but no longer listed for a wide audience. The performance of the St. Matthew Passion by Felix Mendelssohn Bartholdy in 1829 is considered the beginning of a broad Bach renaissance , and since then Bach's works have been valued by the musical public again.

The romance and the historicism played a key role in ensuring that the fascination with music of past eras was also reflected in the music practice. Time and again, composers worked their way through important predecessors. In musical life, however, the performances of the music of bygone eras had otherwise played no role, since they were considered to be outdated.

To be able to perform early music with a historically correct sound image is - with the exception of England - only a concern of the 20th century in Europe. The term “early music” has gained in importance since the reform movements of the 1920s, when, in the course of the revival of historical performance practice , replicas of original instruments were increasingly being made and used. The old music movement saw itself as a contrast and corrective to the conventional concert repertoire. The tonality of early music, no matter how it was perceived, stood in sharp contrast to the late romantic tonality and abundance of timbres.

Some musical instruments had fallen out of use in the 19th century and could be regained for musical practice in the 20th century in the course of the re-evaluation and rediscovery of early music.

The zinc had become, for example, almost unknown. Since the late 1970s, this instrument has experienced an intense revival in the course of the rediscovery of early music. Today there are Zinkenists and instrument makers who produce instruments that are equal to those from the heyday of Zinken.

Things are similar with instruments such as the basset horn , krummhorn , serpent , pommer and rankett .

Important milestones in the rediscovery of early music were:

Today, early music is often understood as a valuable enrichment (or even corrective) of the common repertoire of bourgeois musical culture, as it takes place in the great concert halls of the world. Musicians from the old music scene bring impulses with them to the classical - romantic repertoire, as long as they are willing to change branches. Thanks to the experience of early music , new auditory impressions of long-known works are possible.

Organizations in the service of early music

An undergraduate full-time practical music course for music from the Middle Ages to Romanticism is offered in Switzerland at the Schola Cantorum Basiliensis - the University of Early Music in Basel. 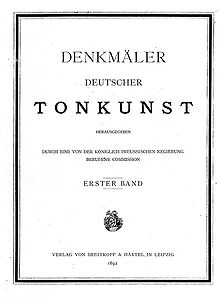 Early music is based on carefully edited and published sheet music editions that have been published as series since the end of the 19th century. The first volume of the Monuments of German Sound Art was published in 1892

Complete editions with the works of composers from the 15th to 18th centuries are also essential for the rediscovery and reproduction of early music. Here are the works by Heinrich Schütz from the 17th century in a modern edition by Bärenreiter-Verlag from 1955

The recovery of the instruments of early music was supported at the same time by musicologists, institutes and publishers who have prepared or at least facsimile a large number of old works in the form of sheet music editions for modern performance.

Karl Vötterle published scientific-critical complete editions in the field of early music as part of the Bärenreiter-Verlag , including the works of

Other leading music publishers in the endeavor to produce an Urtext with a view to early music are G. Henle Verlag , Universal Edition , Carus-Verlag or Edition Peters . These publishers give a detailed account of the editorial decisions and the historical sources used.

Innsbruck is one of the places where early music is regularly cultivated and performed, for example at the Innsbruck Festival of Early Music

In some places, recurring days for early music or festivals were established as early as the 20th century, where works of early music are presented to the audience in concert series by specialized instrumentalists and ensembles: