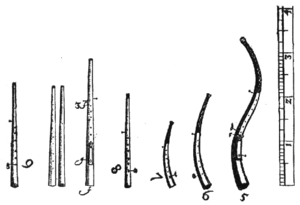 The zinc (from mhd. Zinke : Zacke, tip, Zahn; Italian cornetto , English cornett ) is a historical musical instrument whose use had its heyday in the early 17th century. It was mostly made of wood , rarely also of ivory , and according to the Hornbostel-Sachs system, it belongs to the class of lip-tone aerophones (also known as brass instruments ) as a chromatic finger-hole trumpet in the aerophone group . The zinc has nothing to do with the valve cornet . Based on the original instrument, there is also the organ register of the same name .

In principle , the zinc is blown like a trumpet , that is, the sound is produced with the lips in a kettle mouthpiece - usually made of wood , horn , brass or ivory. Therefore, despite its material, zinc is counted among the brass instruments. The players place the mouthpiece on the side or in the middle of the lips. However, the approach technique of the zinc differs from the trumpet or the other classical brass instruments, mainly due to the relatively small mouthpiece.

Often the zinc is viewed as a kind of mixture of recorder and trumpet. It is a finger hole horn : The natural tones brought out with the lips are changed by opening and closing 6 to 7 finger holes . As with other finger hole horns, the drawing range of the notes is very large, which makes intonation difficult.

From the 15th to the middle of the 17th century, zinc was one of the most important instruments. He has a reputation for being able to imitate the human voice particularly well. The range is just over two octaves . The current literature ranges from a to d '' '.

The zinc is based on a conical tube with seven finger holes. A distinction is made between:

Tines are already attested in the late Middle Ages . The instrument has been used since the Renaissance first of town pipers as a top voice for trombones - Ensemble (trumpets were the nobility reserved and to the harmonic series limited) before it, of Italy , starting, was in the late 16th century to a virtuoso solo instrument. Giovanni Bassano was one of the most famous soloists . Claudio Monteverdi , but also Heinrich Schütz in his earlier days, often composed for zinc.

With the advent of the violin in the 17th century, zinc gradually lost its importance as a solo instrument . It lasted longest in Northern Europe, where the last original compositions for the instrument date from the second half of the 18th century. For example, zinc was used in the performance of the opera Orfeo ed Euridice by Christoph Willibald Gluck in 1762. In 1806 Georg Friedrich Wolf reported zinc as a treble reinforcement for the trumpets. The serpent was the only usable bass instrument in outdoor music until 1800 and was used in military and church music until the late 19th century. As an orchestral instrument, it also made its way into individual scores of the Romantic period . The Lübeck council musician Joachim Christoph Mandischer (1774–1860) is considered to be “the last Zinkenist” who upheld the centuries-old traditions of tower-blowing and playing the prongs until the 1850s.

After Otto Steinkopf and Christopher Monks had devoted themselves to the construction of the historical instrument, zinc experienced an intensive revival in the course of the rediscovery of early music (see historical performance practice ) since the late 1970s . Today there are zinkenists and instrument makers who are equal to those from the heyday of zinken. For beginners today, tines are also made from plastics.

The zinc is considered to be a very difficult to learn and practice-intensive instrument, as both intonation and approach have to be trained for many years and there are only relatively few qualified teachers available.