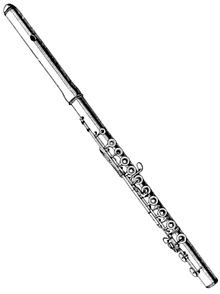 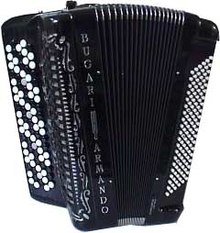 Aerophones (from the Greek ἀήρ , “air” and φωνή “sound”; literally “air sounder”) are all musical instruments in the Hornbostel-Sachs system of 1914 that produce the sound by directly stimulating the air to vibrate. They are divided into:

The distinction according to the tone generation follows in the scheme of Hornbostel and Sachs on the next level.

Classification according to the tone generation

The air flowing past is split and modified in such a way that sound is generated. In the case of free deflection aerophones, the oscillation caused by the refraction of the air is not limited by an instrument body. This includes the real whip .

In the case of interruption aerophones, the air flowing past is regularly interrupted, causing sound to be generated.

In the case of non-self-sounding interruption aerophones, the interrupting element is not moved by the air flow itself. These include the buzzing stick , the purr and the siren .

The air is compressed once. One example is the children's toy slam gun. Even with a whip , the bang is created by compressing the air at the end of the belt.

According to their shape, sucked trumpets are trumpet instruments , but the sound is created with the lips by sucking in air. Membranopipes and Sucket trumpets are not included in the original Hornbostel-Sachs system.

Commons : Aerophones  - collection of images, videos and audio files
Classification of musical instruments according to the type of sound generation