Wind instruments are musical instruments in which a musician usually causes the air column within a hollow body - usually a tube - to vibrate through his breathing air, usually with an instrument mouthpiece. Instruments include according to the Hornbostel-Sachs to aerophones . The blown air flow can also be generated directly with an air bag or bellows or by means of a game mechanism such as the organ . There are various ways of classifying the variety of existing wind instruments into groups.

The classification of instruments based on the Hornbostel-Sachs and occurs in wood , Brass and reed wind instruments according to the type of the tone:

Instruments for marching bands are built in such a way that their trumpets are directed towards the front when playing (in contrast to a French horn , for example). They are referred to as the “marching brass” version, see also Drum Corps # Brass .

The oldest instruments with a blowing edge, probably the oldest wind instruments at all, are those of the recorder type . The smallest and loudest instrument of this type is the whistle . The pan flute can also be traced far back in time. The Old Testament flute is called Chalil . From the Schwegelpfeife of the Middle Ages came the transverse flute , which developed into the transverse flute and its subspecies ( piccolo flute , alto flute ). The flageolet , which is closely related to the recorder, is rarely used .

An elastic tongue hits a throat against the flow of air, producing a sound. The principle is used with a metal tongue on the Martin's trumpet or with a wooden tongue on the drone of the bagpipe . The clarinet (and its subspecies bass clarinet and basset horn ) developed from the chalumeau with a wooden reed . The saxophone is also one of the "woodwinds" due to this tone generation.

The double reed consists of two symmetrical reeds lying on top of one another that swing against the air flow. The oldest representatives of this type are the primitive double-reed instruments in ancient Egypt and Greece ( aulos ), later representatives are Schalmei , Piffero , Rankett and Pommer . In the modern orchestra can be found oboes ( oboe d'amore , English horn , Heckelphone ) and bassoons ( contrabassoon ). But there are also double-reeds in the bagpipes and other instruments with wind capsules .

These instruments are blown with the human lips of the mouth. The sound generation can be explained with the function of the upholstered pipe . The predecessors of today's brass instruments were made of horn substance (cow, bull or ram horn). Sheet metal as today's material use does not play a role in the classification. Music is made with the series of natural tones, length changes are possible with valves or telescopic tubes. The brass instruments can also be divided into two families, the distinction is made according to the length of the length used : If this is mostly conical, one speaks of instruments of the horn family , if the cylindrical construction predominates, of trumpet instruments .

The oldest natural horns were animal horns, the shofar made of ram's horn, the olifant made of ivory , the alphorn made of wood and the cast bronze luras . The zinc and the serpent were made of wood, and the following were built with great skill from rolled sheet metal ( brass ): Parforce horn , later hunting horn and ophikleide . The cornet was equipped with valves even before the modern horn . A complete subfamily of horn instruments with representatives in all registers are the bow horns , which also include flugelhorn , tenor horn , baritone , helicon , sousaphone and tuba .

From the natural trumpets , which were used for fanfares and military signals, the refined, but still valveless baroque trumpet developed and later the modern trumpet . The deep representatives of this family are the trombones (valve trombones or slide trombones).

A didgeridoo has a cylindrical or slightly conical lumen with an approximately straight axis. 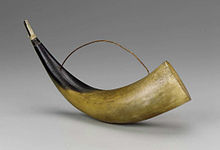 This only includes those instruments whose vibrations are stimulated by an air stream and in which a column of air is made to resonate. These include, in particular, the reed pipes of the organ or the Sheng mouth organ , one of the most important instruments in classical Chinese music. A similar instrument is called the Shō in Japan and Khaen in Laos . Open tongue instruments without a resonator such as the harmonica , although it is apparently blown, as well as the accordion or the harmonium are among the free aerophones.

In 2011, Membranopipes were added to the Hornbostel-Sachs system as a further group of wind instruments because they could not be assigned to any existing category. In the case of the Membranopipes, the toner exciter is a tensioned membrane that is excited by a stream of air and thus periodically opens and closes an air passage, causing the air in a tube to vibrate. In the idle state, the membrane closes the air passage in the case of Membranopipes, while in the case of reed instruments, which are otherwise similar in terms of sound generation, the air passage is open in the idle state and only closes periodically when the air blows.

With wind instruments, a column of air in the resonance body is stimulated to vibrate by blowing on it . The blowing technique and the shape of the instrument mouthpiece significantly influence the tone character. With many variants of the instrument, the fundamental oscillation can also be overblown : by blowing more strongly, a higher natural tone is stimulated instead of the fundamental tone , with brass instruments this is achieved through a higher air speed and increased lip tension. Using circular breathing , a tone can be produced continuously.

To improve technique and sound, exercises with natural overtones (series of natural tones) and long tones are used.

The attempt to generate the sound of wind instruments electronically is made difficult by the complex individual nature of the blowing noises and the transients in the sustained tone.

With some musical instruments, such as the saxophone , the tone character can also be varied by singing along (at the same time as blowing), with the saxophone this " growling " (translated as "humming" or "growling") creates a rougher sound similar to a human " smoky “voice.

While air is blown in through an opening in the vast majority of wind instruments, straight-through reed instruments produce sounds when air flows in both directions. There is also a small group of traditional wind instruments, the air vibrations of which are created by vibrating the lips when sucking in air. These suction instruments (English sucked trumpets ) include some animal horns, conical bark trumpets and wooden trumpets . Suction instruments are known in Siberia with the Tungusic word byrgy and in Chile as nolkin .

Classification of musical instruments according to use by the player