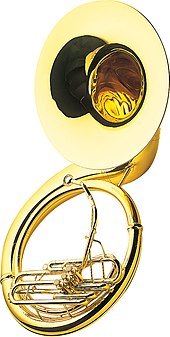 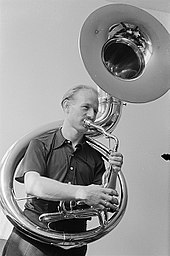 The sousaphone or Sousafon [ ˌzuːzafoːn ] is a form of Tuba , which in the 1890s on the initiative of the American composer John Philip Sousa and in collaboration with the instrument maker JW Pepper from Philadelphia was developed and named in gratitude for Sousa. The oldest known Sousaphone dates from 1893. Pepper built an instrument that could point the funnel upwards during a concert and forwards when marching. Other companies quickly built their own versions, and instrument maker CG Conn made a sousaphone favored by Sousa and his band.

In terms of function and length, the instrument is a bass or double bass tuba in F, Eb or C and Bb with three or four, rarely five valves .

The design of the Sousaphone comes from the Helicon , whose smaller funnel (the bell) is not directed towards the front, as in the Sousaphone, but laterally. In contrast to the tuba, it is not worn in front of, but around the body. The towering bell of the Sousaphone with a short, but very wide, bell-shaped bell pointing forwards at about 90 ° (diameter about 65 cm) is removable. In the original Sousaphone, however, the funnel pointed upwards, which is why it was also called "Raincatcher". Sousa wanted to avoid a bass aimed directly at the audience, so the model with the forward-facing funnel that is in use today was never used under his personal direction. Sousaphones made of plastic have also been common since the 1960s, and their bell and the last pipe turn are made of white-colored fiber composite material (glass fiber reinforced epoxy resin ) to save weight . Modern players, like Kirk Joseph at first , have achieved a mobility on the instrument that almost corresponds to that of a stringed instrument.