This article covers the musical instrument tuba; for other meanings see tuba (disambiguation)

The tuba ( Latin for "pipe, tube"; plural tubes or tubas ) is the lowest of all common brass instruments . It has an upward-pointing bell, a beaker mouthpiece, three to six valves and, due to its wide length and the correspondingly strongly conical tube, generally made of brass, belongs to the family of the bow horns .

"Tuba" was the name for a brass or bronze wind instrument in the Roman Empire . It had the shape of a straight, elongated tube with a narrow bell, similar to a fanfare , and probably corresponded to the Greek salpinx .

Today, a tuba is the bass instrument of the bow-horn family . The first tubes were developed in Berlin around 1835 shortly after the invention of valve technology . Wilhelm Wieprecht and Carl Wilhelm Moritz received a patent this year for a bass tuba in F with five valves. The double bass tuba in Bb and C was developed by Václav František Červený in 1845 and patented in 1846.

Thanks to its more advantageous sound and more precise intonation , this instrument soon replaced its forerunners in orchestras, the serpent or bass horn and the ophicleide .

The bass and double bass tuba are used equally in the orchestra. In the orchestra, the tuba is usually single, more rarely double. Whether a part is played with the bass or double bass tuba is usually decided by the tuba player himself based on factors such as the required pitch, volume or timbre, the wishes of the conductor, the room acoustics and the like. However, some composers, such as Richard Wagner, dictate the design. An orchestral tubist in German-speaking countries has to master both designs with virtuosity. In the Scandinavian countries, England, France and large parts of America as well as Australia, the double bass tuba in C is mainly used. The alternative to the bass tuba in F in these countries is an Eb tuba.

In Concert both folk and symphonic embossing ( Concert Band ) is usually at least two tubes are filled. If they don't play in unison, they are usually in the octave of each other.

In jazz , the tuba played the bass role until around 1925, before it was replaced by the double bass . After the Second World War it celebrated a comeback in the amateur Dixieland . 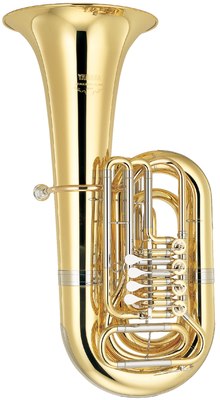 Double bass tuba in B

The main feature of the tuba is the strong expansion of the tube (wide scale ) in a ratio of up to 1:20 from the mouthpiece to the bell of the instrument.

When seated, the tuba rests on the thighs of the wind player, for smaller tuba players with particularly large instruments also on the chair itself. A special stand, shoulder strap or tuba belt ( Tubabelt ) is required to play while standing . The funnel usually points upwards and usually slightly to the left in the version with rotary valves or to the right in the version with Périnet valves (as seen from the player).

The fingers of the right hand are on the first three to five valves . The instrument is supported with the left hand and, depending on the construction, up to three additional valves are pressed for better intonation .

The tuba is played with a kettle mouthpiece.

The natural tones of the Bb tuba are:

The tones mentioned in brackets can only be used to a limited extent, as they differ significantly from the corresponding tones that are equally tuned .

The fundamental tone or the lowest natural tone is also known as the "pedal tone". This can only be voiced on the tuba because it has a wide length . In practice, the player needs a lot of air and his breathing support to stimulate the standing wave of the fundamental in the tuba.

The tuba has a usable range of more than four octaves . 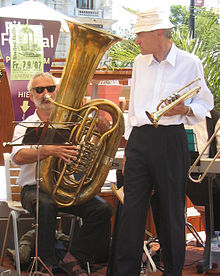 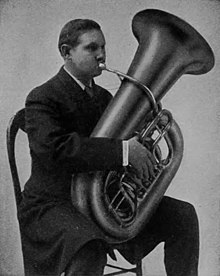 Tubist with the New York Philharmonic (1917) 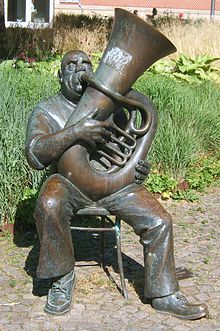 In 1979, the American musician called Joel Day the International Tuba Day off, which is celebrated since 1982 every year on the first Friday in May. On World Tuba Day there are concerts, lectures and exhibitions all about the instrument. According to Joel Day, the tuba player does not find the level of respect and recognition he deserves. The tuba is often dismissed as unimportant and viewed as an "imposing" appendage.