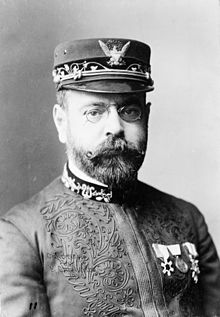 John Philip Sousa (born November 6, 1854 in Washington, DC , † March 6, 1932 in Reading , Pennsylvania ) was an American conductor of military bands and composer of marching music and operettas .

His most famous works are the Semper Fidelis (1888), The Washington Post (1889), The Liberty Bell (1893) and The Stars and Stripes Forever (1896) marches . The Sousaphone is also dedicated to the “King of Marching Music” . It was developed in 1893 at his suggestion and given its name as a thank you.

John Philip Sousa at the age of 22

The son of Seville- born Portuguese John Antonio de Sousa (September 22, 1824-27 April 1892), himself the son of a Spaniard, and Maria Elisabeth Trinkaus (May 20, 1826-23 August) from Fränkisch-Crumbach ( Odenwaldkreis ) 1908) was born in Washington in 1854 and grew up surrounded by military band music. He became familiar with the violin at the age of six, followed by the piano , flute , trombone and horn . His father played the trombone in the band of the United States Marine Corps (United States Marine Band, also known as The President's Own since 1801) and also taught him.

John Philip was the third child of ten siblings. When he ran away from home at the age of 13 to join a circus band, his father enrolled him as an apprentice in the navy band. Until he was 20 years old, he stayed in the band and also took lessons in music theory and composition with George Felix Benkert, a well-known orchestra conductor and music teacher in Washington. During these years Sousa wrote his first composition entitled Moonlight on the Potomac Waltzes .

After his discharge from the corps in 1875, Sousa began touring as a violinist and eventually conducted theatrical performances such as Gilbert & Sullivan's operetta HMS Pinafore on Broadway . In 1879 he met Jane van Middlesworth Bellis (February 22, 1862– March 11, 1944), whom he married on December 30, 1879. At the time of their wedding, Bellis was 16 and Sousa was 25. They later had a son and two daughters.

A year later, the couple returned to Washington DC, where Sousa took over the helm of the United States Marine Band in 1880 and introduced numerous changes. Rehearsals became compulsory, so that around a quarter of the musicians gave up. Sousa also expanded the band's music library by recording some of his own transcriptions. The reformed band's debut was successful, which increased the band's popularity and resulted in it becoming the best American military band. He gained prestige in the circles of military musicians with his composition from 1886 The Gladiator . In 1888 he wrote the March Semper Fidelis ( Latin for "Always loyal"), which he dedicated to the "officers and men of the Marine Corps". It has since been considered an official march of the Marine Corps.

In 1890 the Columbian Phonograph Company wanted to record a military band with the latest technology at the time, the phonograph . They looked for the best band and chose Sousa's marine band. In the fall of 1890, 60 rolls were published. In the two years that followed, Sousa's marching music was one of the most successful recordings. In 1897 Columbia Records had more than 400 different recordings on offer. Sousa served twelve years as Kapellmeister of the American President's quasi-official band, The President's Own, serving Presidents Rutherford B. Hayes , James A. Garfield , Chester A. Arthur , Grover Cleveland and Benjamin Harrison . In 1892, on the advice of his friend and promoter David Blakeley, he left the Navy Band to found his own civil band. Sousa gave his farewell concert on July 30, 1892 on the lawn in front of the White House .

Sousa toured the United States and Europe with his orchestra from 1900 to 1905, and finally embarked from New York on December 24, 1910 on a world tour that took him during 1911 a. a. led to the following places: 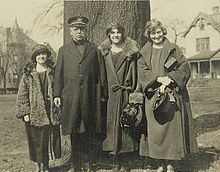 Sousa with soloists from his band

Sousa was a member of the League of Freemasons , he was in Washington in the Hiriam Lodge no. 10 was added . There he also composed the march Nobles of the Mystic Shrine for the Shriners .

After the outbreak of the First World War , Sousa was appointed as a reserve officer in 1917. He was 62, which was the retirement age for officers in the fleet. During the war, he headed the Navy Chapel, which was stationed on the Great Lakes . By that time, Sousa was already a wealthy man, so he donated his salary to the Sailors 'and Marines' Relief Fund every month . In 1918 he was released from active service. Nonetheless, he remained in the reserve and was named Lieutenant Commander in the 1920s . After the end of the war he resumed traveling with his band. He stood up for the musical education of school children and fought for the rights of composers. For this reason, he addressed Congress in 1927 and 1928.

Sousa was such a successful clay pigeon shooter ( Trap discipline ) that he was inducted into the Trapshooting Hall of Fame as one of the best of all time. He was instrumental in founding the First National Trapshooting Organization, which was later replaced by the Amateur Trapshooting Association (ATA) and is a sought-after author for books on clay pigeon shooting (so 1902: The Fifth String ).

In 1932 John Philip Sousa died in Reading, Pennsylvania . He was in town to conduct the Ringgold Band's anniversary concert and died of a heart attack at the Abraham Lincoln Hotel . Sousa's funeral was held in the Marine Band Auditorium and was broadcast on the Columbia Broadcasting System . He was buried in the family grave of Congressional Cemetery in Washington, DC. In honor of Sousa, the United States Marine Band will play the march Semper Fidelis on his birthday .

On December 9, 1939, the newly built Pennsylvania Avenue Bridge received its name. He was posthumously honored with a star on the Hollywood Walk of Fame . In 1976, Sousa was inducted into the Hall of Fame for Great Americans . Sousa's most prestigious honor was made in 1987 by Congress, which declared his composition The Stars and Stripes Forever the "National March of the United States". In 1998 he was inducted into the American Classical Music Hall of Fame in Cincinnati , Ohio. Sousa's life was filmed in Hollywood in 1952 by director Henry Koster under the title Stars and Stripes forever (German title: Liebe, Ketteln und Trumpet ) with Clifton Webb in the role of Sousa.

Almost everyone knows Sousa's marching music without the name of the composer and conductor being familiar. His patriotic composition Stars and Stripes Forever from 1896 is considered a kind of second national anthem of the USA and served among other things. a. For many years in German television advertising as the signature tune of the cleaning agent Der General . Also well known is the theme of The Liberty Bell (1893), named after the Liberty Bell in Philadelphia , which as the opening music for the English television series Monty Python's Flying Circus was used.

Sousa wrote 136 marches, some of which still belong to the standard repertoire of marching bands around the world, including Semper Fidelis (1888) and especially the march composed in 1889 for the newspaper of the same name , The Washington Post . The dealers ordered piano reductions from these marches in quantities of 20,000 pieces. Since the Two Step became a fashion dance, the March The Washington Post enjoyed international, especially European success, where it was used as the standard dance accompaniment. The composer's most popular marches also include:

As early as 1882 and beyond 1900, Sousa was also active as an operetta composer, when he premiered the following genre contributions:

Sousa also composed the music for six operettas that were either unfinished or not produced: The Devils' Deputy , Florine , The Irish Dragoon , Katherine , The Victory , and The Wolf .