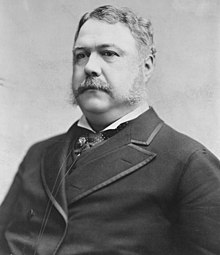 Arthur was originally a teacher, then a lawyer, and later headed Customs in New York. He launched civil service reforms to curb corruption and began modernizing the fleet. Overall, however, Arthur was considered a rather weak politician. Within the Republican Party he is assigned to the conservative group of the Stalwarts .

To the present day there are suspicions that the place of birth of Arthur is said to have been outside the American borders. Then, according to the then prevailing interpretation of the American constitution that a natural born citizen was only someone who was born on the soil of the United States, he would not have been allowed to assume the office of president or vice president. During the presidential election of 1880 , the New York lawyer and political opponent of Arthur, Arthur P. Hinman, initially spread the thesis that the birthplace of the then vice-presidential candidate was actually Ireland . When this version found no faith, Hinman declared Canada to be Arthur's true country of origin. But this claim was not relevant to the public either.

It is certain that Arthur was born as the fifth of eight children of the Baptist preacher and staunch abolitionist William Arthur (1796-1875) and his wife Malvina Stone (1802-1869). He had six sisters and one older brother. His father changed jobs frequently between the states of New York and Vermont. The school enrollment took place in the town of Greenwich in Washington County . The family moved a total of six times by Arthur's 14th year. Despite these adverse circumstances, Arthur was able to get a good school education for the time.

In 1844 the family moved to Schenectady, New York State . Arthur was specifically preparing for his college visit here. A year later he took up his studies at Union College , which he successfully completed after three years in the upper third, which then entitled him to teach as a teacher. He also pursued this career path, but in addition to his teaching activities, he also studied law. From 1853 he moved from the teaching desk to a law firm. He was admitted to the bar in 1854 and practiced in New York as an attorney in a well-known law firm that Erastus D. Culver was director. Arthur quickly built a reputation for himself. He became publicly known as a defense attorney in the Lemmon v. New York, which was about slaves who had fled the south . In his opinion, these were to be regarded as free in New York. The court ruled in its favor and thus against the Fugitive Slave Law of 1850 . In 1860 the New York Supreme Court upheld the verdict. Through this work Arthur came into contact with the abolitionism movement as well as with the Republican Party .

From 1857 Arthur was employed as a lawyer by the Second Brigade of the New York State Militia . In 1859 he married Ellen Lewis Herndon , daughter of a Virginia naval hero . The marriage had three children. Ellen Arthur died of pneumonia in 1880 and was unable to see her husband's later presidency. In 1860 Arthur got into the political business. He supported the re-election of Edwin D. Morgan , Governor of New York. With the beginning of the civil war , Arthur reported to the troops of the Union. He quickly gained a good reputation and was responsible for training 120,000 men. With his organizational talent, he completed his duties as brigadier general and quartermaster of the New York militia in just a few months.

After the Civil War, Arthur returned to his office, which he ran with Henry C. Gardiner . The firm did very well and was able to expand. Arthur gained access to the "better circles" of New York. In 1868 he supported the election campaign of Ulysses S. Grant for the office of president. He also became chairman of the Executive Committee of the New York State Committee of Republicans. Therefore, in 1871, he was offered the position of Chief Customs Officer of the New York Harbor - a post of high standing and good merit. Arthur worked in this capacity until he was dismissed by then President Rutherford B. Hayes in 1878 as part of a reform program. 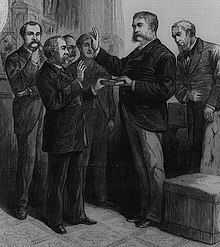 Chester A. Arthur at his swearing in as President

Chester A. Arthur's official portrait in the White House

In 1880 the parties' nomination conventions for the election of the president were again due. With James A. Garfield , a candidate prevailed among the Republicans who stood for the continuation of reforms of the organizational structure of the government, in particular with regard to the collection of taxes and customs duties. In order to reduce internal party tensions, Arthur, who himself was a customs collector and thus represented the previous system, was filled as Vice President. After Garfield succumbed to an assassination attempt two and a half months earlier on September 19, 1881, Arthur was sworn in as President of the United States in his private apartment in Manhattan . Two days later the ceremony was repeated at the Capitol in Washington, DC . Because of his well-groomed appearance, Arthur was quickly nicknamed First Gentleman of the Land , Gentleman President or Prince Arthur . Politically, Arthur put the cabinet up to the Secretary of War Robert Todd Lincoln , a son of Abraham Lincoln . He initiated reforms of the civil service to curb corruption, thereby turning away from his political roots in the New York power apparatus, which has been discredited by corruption. This turnaround was perceived as a surprise to the public. In addition, a modernization of the naval fleet took place during his tenure, which is a prerequisite for the victory of the United States in the Spanish-American War in 1898.

Arthur suffered from a secret kidney failure. Despite this illness, Arthur ran for the nomination for the presidential election in 1884 , but he did not campaign actively. At the Republican nomination convention from June 3 to 6, 1884 in Chicago , Arthur received only the second highest number of votes after his former Secretary of State James G. Blaine , who was nominated in the fourth ballot for the presidential candidate, but the Democrat Grover in the election on November 4, 1884 Cleveland lost. This replaced Arthur on March 4, 1885 in the office of President. Arthur succumbed to his ailment on November 18, 1886 without being politically active again.

Chester A. Arthur was known for his fondness for fashionable clothing, and he celebrated his swearing-in as president with a shopping spree.

Arthur's wife, Ellen Herndon, died in 1880, before her husband became vice president. During his tenure as president, his sister served as first lady and lived with him in the White House.

In the movie Die Hard , Chester A. Arthur is mentioned all the more because the elementary school named after him plays an important role in the film. His work in the New York City Council is also mentioned.

In the film Appaloosa , Chester A. Arthur is mentioned for pardoning the farmer and convicted criminal Bragg.

In the film Gunslingers of Wyoming ( Cattle King , 1962) the character of President Chester A. Arthur (Larry Gates) is shown in the historical context of the dispute between cattle and sheep farmers.

In an episode of The Simpsons in which Bart plays the murderer of Abraham Lincoln in a play , he shouts, "You're next, Chester A. Arthur!"

He is also mentioned in the sitcom How I Met Your Mother , when the character Ted shaves off his beard and has whiskers for a short time, whereupon his roommate Marshall alludes to Chester A. Arthur.

In the PC western strategy game Helldorado , the ultimate goal of the game is to rescue Chester A. Arthur from a Mexican revolutionary / terrorist named El Cortador.

Vice President of the United States