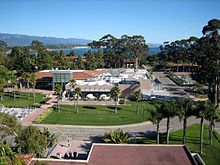 UCSB is one of the Public Ivy Universities, which stand for excellent research performance and high-quality teaching. The university is divided into five colleges and offers more than 200 courses. UCSB is one of the top five public universities in the United States. In the National Universities , UCSB was ranked 37th and 24th among the best global universities according to the 2018 US News & World Report ranking. In the Times Higher Education World University Rankings , UCSB reached 53rd place in 2018 and 45th place in the Academic Ranking of World Universities in 2017.

UCSB is a member of the Association of American Universities , an association of leading research-intensive North American universities that has existed since 1900. In 2017, 23,497 students were enrolled.

In 1969, UCSB took part in the Arpanet , the forerunner of today's Internet . Together with three other research institutions, this makes it one of the first four participants to be connected with one another using Internet technology.

The sports teams call themselves the gauchos . The university is a member of the Big West Conference .

With Isla Vista Beach and Goleta Beach, the campus in the south has two separate sandy beaches located on the Pacific Ocean . There are two golf courses in the north. The campus is directly connected to national air traffic through the Santa Barbara Municipal Airport .

Since 2001 the university has regularly organized the International Capture The Flag (iCTF) IT security competition , in which universities from all over the world take part.

Other employees and guest lecturers